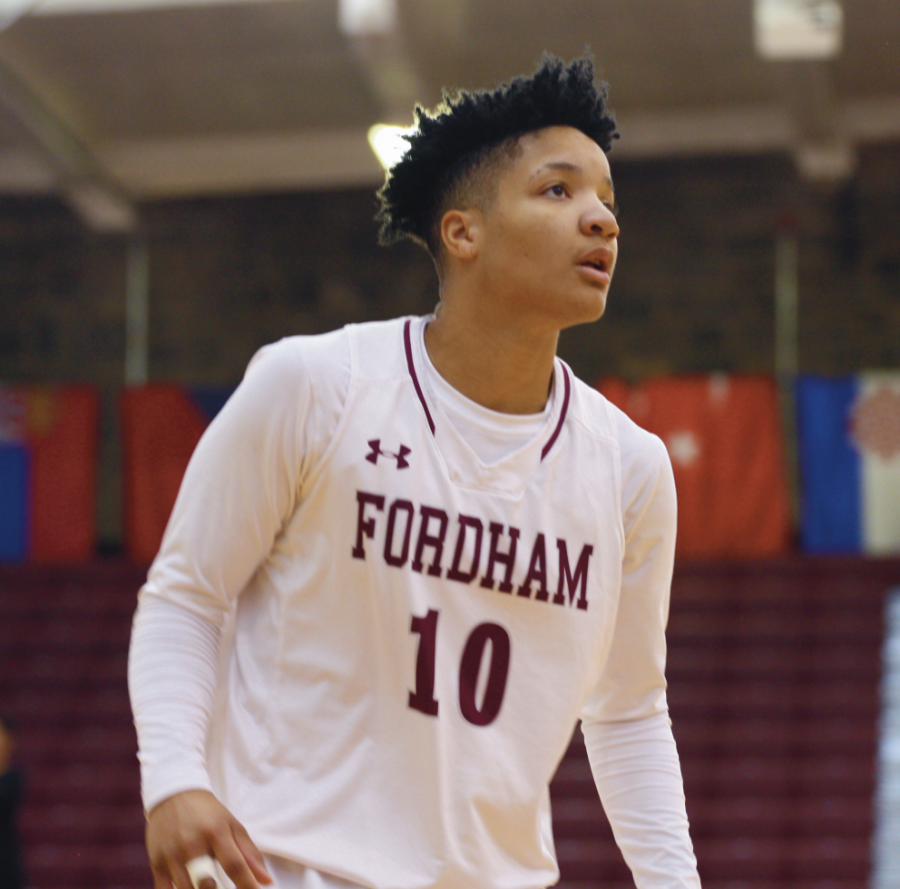 In her first season playing for Fordham, Bryson Cavanaugh has been a force on both sides of the court.

In only her second season, Bryson Cavanaugh, Fordham College at Rose Hill ’21, has already established herself as a leader on the talented Fordham women’s basketball team, as well as a force in the Atlantic 10. A consistent performer on both sides of the court, Cavanaugh has averaged 17 points per game on an offense largely centered around her play, and she has been named the Atlantic 10 Player of the Week three times in only three months.

Despite exciting fans and sports networks alike, these statistics and accolades fail to capture Cavanaugh as an individual. A recent interview with Fordham’s top scorer has revealed an ambitious woman of high character behind the jump shot, serving not only as a source of school pride but also community leadership.

Having transferred from the University of California, Berkeley to Fordham in the 2016-17 school year, Cavanaugh was forced to take a year off from play due to NCAA transfer regulations. In the year off, she had the opportunity to become acclimated to the Fordham environment.

Regarding her teammates and coaches as her “family,” Cavanaugh also appreciates Fordham’s New York environment. Unlike many Rose Hill students, she also showed appreciation for the Lincoln Center campus, saying, “I like Lincoln Center as much as I like Rose Hill. I think for me … they’re both great campuses.”

Since joining Fordham women’s basketball, Cavanaugh has made an immediate impact, and it is not unusual to see her play the full 40 minutes of any given game.

In preparation for their game against La Salle University, Cavanaugh described a packed schedule to physically and mentally prepare for her heavy workload. At 10 a.m., the team watches at least an hour of film to prepare for their opponent. To meet the physical demands of such a role, she will then practice with her team from 11 a.m. to 2 p.m. nearly everyday. This includes a full practice as well as an hour-long weightlifting session. Before and after this, Cavanaugh must also attend classes, fulfilling both requirements of a Fordham student-athlete.

She must then transfer all of this work into the game. According to Cavanaugh, the team takes the first half of any game five minutes at a time. Then, at halftime when an extra push is needed, it becomes more automatic as she said to herself, “alright, last 20 minutes, you just have to give it your all.”

This mindset has produced several stellar stat lines for Cavanaugh this season: a stunning 27 points against Manhattan University, a clutch overtime performance to defeat Maine University in the Holiday Classic and so many more.

When asked about her favorite personal game, however, she hesitated to answer. Eventually, she chose her outing against Washington in the Gulf Coast Showcase, and also selected it as her favorite team win. She credited her success in the game to her team, saying that “our team success in that game led to one of my better performances.”

On her personal blog, Cavanaugh has written at length about her life before Fordham and the importance of basketball in those early years. When asked to elaborate, she said that “the time I decided to take basketball seriously was the time when I decided to use it as a way to release some tension, some anger, sadness and things that have happened in the past. I’ve used basketball to relieve that stress and it helps.”

In her new environment, the stresses of college can get to her, and even when basketball is the cause of the stress, she still plays to overcome it. In those situations, “going back to the gym and shooting and remembering why I got into basketball in the first place helps to relieve that tension or built up stress.”

Since coming to Fordham, Cavanaugh has established herself as more than just a player.  Behind the basketball is an individual fulfilling all that is expected of a Fordham student.

Having been born with a gift, Cavanaugh has used that gift to overcome difficult circumstances. She has worked extraordinarily hard and will continue to work hard, not only for herself but for her team and school.

She is a leader in the community that has demonstrated every value required of the Jesuit tradition, and as a sophomore, it will be very exciting to see what she has to offer this season and in years to come.

Editor’s Note: In a previous version of this article, it was stated that Cavanaugh was a freshman rather than a sophomore.