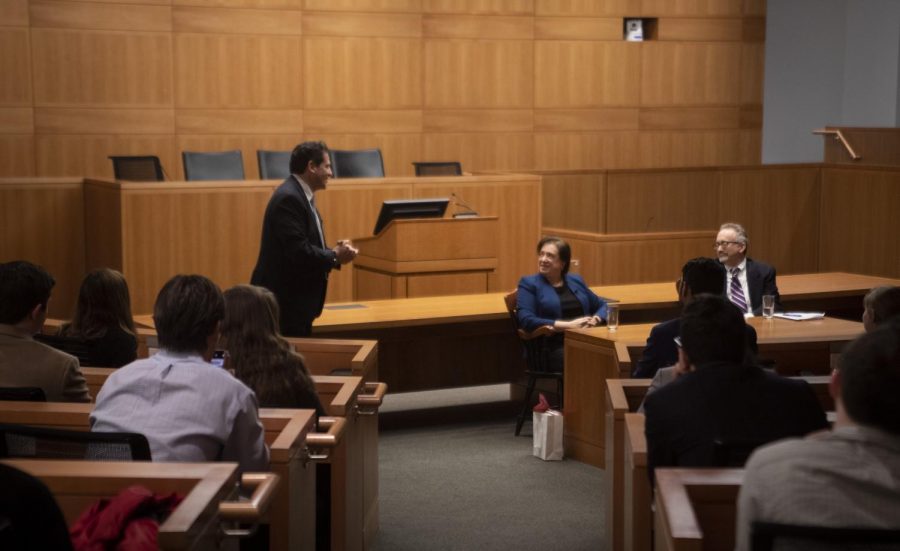 The usual stillness of the Fordham Law School building was replaced by large crowds and Secret Service agents on Monday, Feb. 4, as Fordham hosted Associate Justice Elena Kagan of the Supreme Court of the United States. On the invitation of Matthew Diller, dean of Fordham Law and her old friend from Harvard Law, she addressed a room of law students, prospective attorneys themselves, in a moderated Q&A panel.

Speaking to the packed auditorium, Justice Kagan recalled her time as a law student, detailing the aspects of a career many in the audience aspired to follow. She recounted her time as a law clerk working under former Associate Justice Thurgood Marshall, the first African-American man to be appointed to the Supreme Court. She also looked back on her confirmation to the Supreme Court in 2010 under the Obama Administration, a process she recalled being “kind of fun.”

Kagan then recalled her experience as a woman in the judicial system and her distinction as the first female Solicitor General (SG) in 2009. While Kagan acknowledged the significance of the appointment, she had little more to say about her being the first female anything. “I can’t say that being a woman SG was any different from being an SG,” she said. “Basically all the other high jobs in the Justice Department had been filled by women.”

Kagan kept the panel’s tone casual and even humorous at times, despite the black-tie dress code. At one point, Justice Kagan was asked which Marvel superhero was her favorite, to which she answered confidently: Spider-Man. The appreciation came from a patenting case she took  involving a “spider-glove that you could put on your hand and then you would press a button … and web stuff would come out.” During the case, she even managed to work in the quote, “With great power comes great responsibility” into her opinion statement, much to her apparent delight.

Rather than focusing on her personal achievements, Kagan spent most of the panel giving advice to the audience.

When asked about challenges she faced, Kagan responded, “I struggled with law school,” drawing laughs from the audience. She assured students that high grades in school do not necessarily make good lawyers. “If you want something, just keep working at it,” she said.

Justice Kagan also gave her personal opinions on judicial matters and practices. She defended the process of judicial confirmation hearings, which have recently come under criticism within the legal community.

Kagan encouraged audience members to “come down to the court and watch some of the really great people work.”  She requested aspiring lawyers to ask themselves, “What does it mean to be one of these people who just stand up at the podium and are phenomenal?”