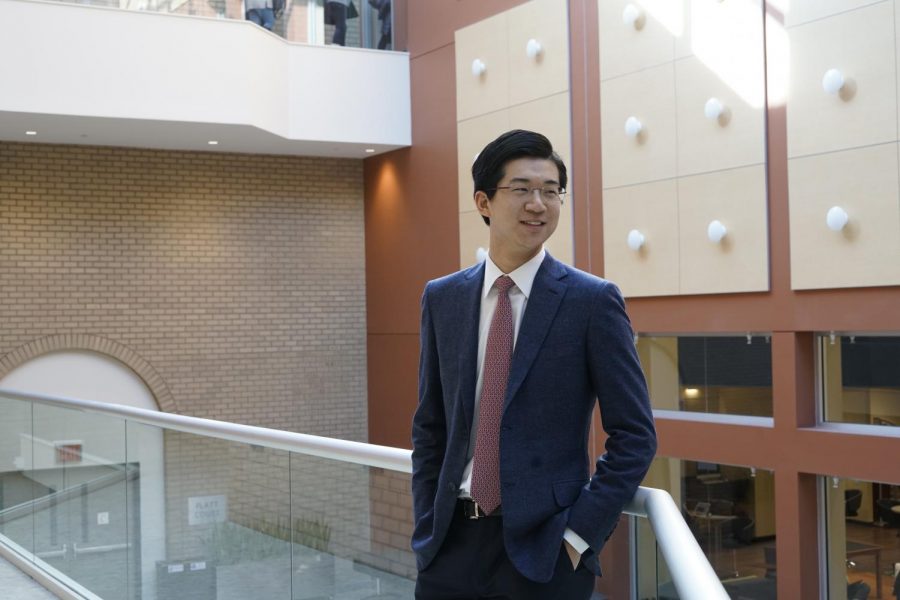 Tony Yancheng Li is an international finance major, has had numerous internships and loves choir.

The Gabelli School of Business (GSB) is a selective school, filled with students exploring a variety of jobs and activities throughout their time at college. Tony Yancheng Li, GSB ’20, is an international finance major, Fordham choir singer and has had numerous internships.

You are from Shanghai originally but you spent two summers in Georgia. What brought you there?

My high school actually has a dual program, and I got a diploma from my Shanghai high school as well as the high school in Atlanta, Georgia. I needed to take American history and literature, and attended high school during the summertime. My dad worked for Hewlett Packard before I was born, and he usually had conferences and would fly to Dallas for work. So I was learning English since I was in kindergarten.

After living in the U.S. for two summers, what made you want to pursue higher education there?

I think my experience in Atlanta was great because in China we have a huge population. So if you want to get into a better college, the only way is to attend the University Exhibition Task, which is like SAT, but you can only take it once for your whole school year. And the kind of college you can get into is simply based on grades.

Everyone in Gabelli is very passionate about getting an internship in any product bracket, you name it — Goldman Sachs, Bank of America, Merrill Lynch, Deutsche Bank. I think it is a really good environment when you’re here.

During my sophomore year I was approached by Aflac. I did some research before I went there and found out they had a really huge piece missing of their marketing strategy. They had a lot of accounts on social media, but on every post they did, people barely liked the page. So I created a template, made it into a PDF file and brought it to my first interview. The hiring manager was pretty surprised, and I pitched him an idea, saying, “Hey, I was taking a marketing class this semester and I found out you have a huge missing piece, maybe I can help out with this.” So I ended up landing myself an internship at Aflac.

We also have Gabelli Career Services called PPD. It’s the office right in front of the trading room. So I met with Jennifer O’Neill, assistant director at PPD. She helped me with my resume, networking and attending campus events. She even helped me reach out to people she knows. I’m very, very grateful for her.

Do you feel that Gabelli has equipped you for these internships?

Yeah, I’ll be very honest with you. What I think Gabelli has equipped me with was very nice peer groups. I would say my classmates are very positive. Plus, I think Gabelli’s PPD is pretty good.

I’m not so sure about the finance program. At Lincoln Center, I don’t think we have that many opportunities. I feel like they tend to lean towards the idea that students will not need sponsorship after graduation. I wasn’t so sure that the program could equip us with an internship. Just look at the Career Fair. I definitely saw the companies Goldman Sachs and Morgan Stanley come here, but if you dig into it, only the Goldman back office went to Lincoln Center. You got the name but you didn’t get the job you wanted.

I know that you also sing for the Fordham choir. Are you a part of the club purely for enjoyment or can you see some overlap that you can apply to the business spectrum?

At the time I went to the audition, I saw there was a club that could teach us how to sing like Kanye West or Justin Bieber. But I didn’t know the choir sings church songs. I had no singing experience before. The director liked me very much and he found out I learned very quickly. I was surprised when I was accepted. But after I went to the rehearsal, I found out that everybody besides me had at least high school or previous singing experience. But I didn’t give up. I stayed in the choir, I listened very carefully and tried to mimic keys. After three months, we had a video concert performance at St. Patrick’s Cathedral on Fifth Avenue. But if you asked me if I joined the choir for networking, no. I joined because I like singing.

This interview has been condensed and edited.