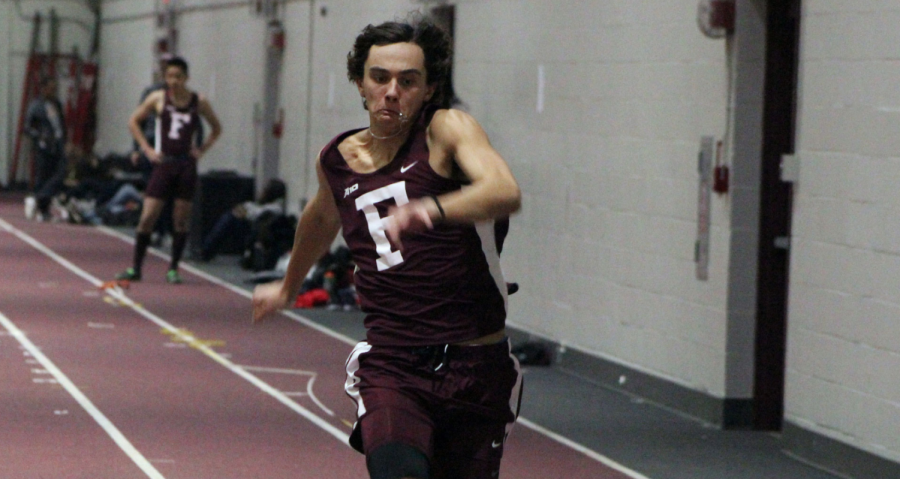 Nikolas Reardon, FCRH '21, sprinting to launch for a high jump.

Fordham men’s and women’s track competed at their second meet of the year on Friday, Jan. 18, at the New York City Gotham Cup. The meet took place at the Ocean Breeze Athletic Complex, a state-of-the-art professional indoor track and field facility on Staten Island. The team ran against close to 20 schools including Adelphi, Hunter, Loyola and NYU, along with a few sub-elite teams from in and around New York City.

The meet was not a team scoring event, but Fordham had more than a few impressive individual and relay finishes. Overall, the team had seven top 10 finishers between the men’s and women’s competitions, including both of their 4×800 relay teams. The men’s team placed third in the event out of 12 teams, coming in after New Jersey’s Garden State Track Club and Ramapo College with a time of 8 minutes and 14 seconds. The women’s team, also placing third, finished in 9 minutes and 50 seconds, ahead of nine other teams.

The team’s top finisher, Nicholas Raefski, Fordham College at Rose Hill (FCRH) ’21, took fourth place in the men’s 3,000 meter race, finishing with a time of 8 minutes and 50 seconds. In doing so, he shaved almost three seconds off of his previous indoor personal best of 8 minutes and 53 seconds in the event.

Angelica Piccini, FCRH ’22, and Kaia Corthell, GSB ’20, finished back-to-back in the women’s 400 meter race in a field almost as large as the men’s. Out of 101 finishers, Piccini finished 80th in 1 minute and 5 seconds and Corthell, in 81st, less than a second behind her.

The Rams will finish out January with two more meets. They will head to the Terrier Classic at Boston University on Jan. 25 and 26 and will end the month back in Staten Island at the Metropolitan Championships on Jan. 31 and Feb. 1.