Review: Gilded in Glitter, How Much Jukebox Inferno Can ‘The Cher Show’ Take? 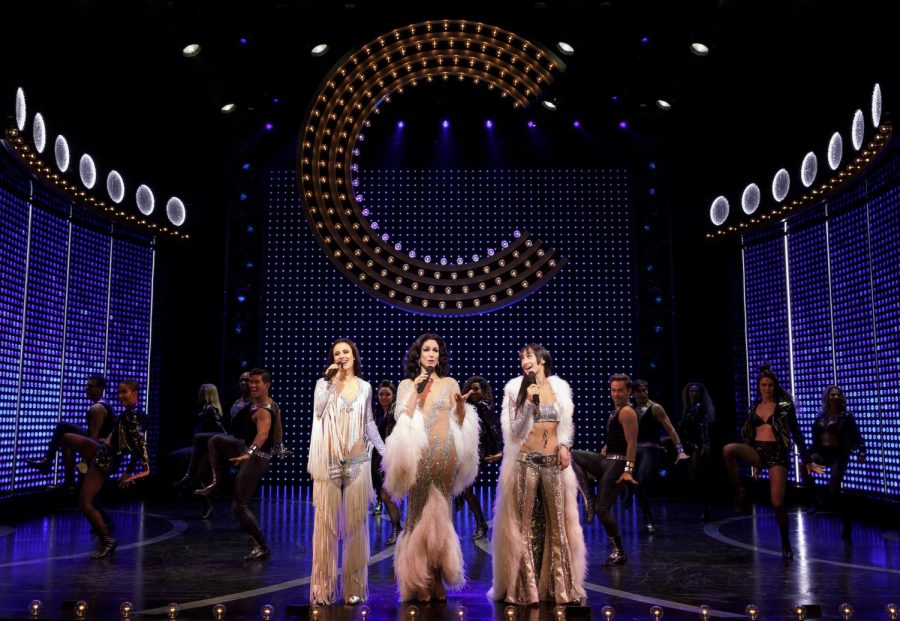 Cher could never be contained in a Broadway musical. Let’s start there. If the makers of “The Cher Show,” among whom the real Cher is a producer, thought the pure divadom of its subject, dressed in all the gloriously gay, sequined and campy stylings of our favorite dark lady, could save the bio-musical from itself, they were holdin’ out for love.

And not enough love in the world (I’ll stop now) could save “The Cher Show” from its disappointingly guarded and directionless attempt to squeeze Cher’s many lives into a bordered, formulaic dramatization of her career. Frantic in its attempt to distill five decades of stardom into three hours, “The Cher Show” careens from spotlight to spotlight, shag rug to shag rug, and speeds from striped bell bottoms to autotune, London to New York, Broadway to Hollywood, illegibly.

Rarely are audiences treated to a complete Cher song, the production opting instead for a mixed-bag of truncated numbers crafted to fit a script (Rick Elice) struggling not to burst at its seams. By the time everything is over in a bang of “Believe” — fooled as I was by my own plastered grin, waterboarded by sheer Cher ecstasy pouring off the stage — I had almost no clue how we’d gotten there, the musical speeding through the 80s and 90s to account for an unbalanced emphasis on the early years of Sonny (Jarrod Spector) and Cher. (By the way, had the musical followed its inclination to focus on Sonny and Cher, choosing that narrative rather than some biopic haze, the musical may have saved itself from the depths of jukebox hell.)

Yet, these are our quibbles with every bio-musical, and you’d be a fool if you expected to walk into the Neil Simon Theatre and not encounter the host of narrative vacancies, braun and no brain, that plague musicals of this kind — especially that “The Cher Show” opted for the three-stars-in-one, Star (Stephanie J. Block), Lady (Teal Wicks) and Babe (Micaela Diamond) Cher option, that I’d have hoped “Donna Summer” resolutely shot dead — though Rick Elice’s device that each Cher is able to talk and consult one another is a slight, more balmy than comforting reinvention of this hoky character structure.

But I refuse to be a total cynic. We finally have a star-studded Broadway musical about Cher, and there are things to celebrate.

I’d be lying if I said I cheered for Cher the entire show. Mostly, I whooped and hollered for Stephanie J. Block, who is, as far as I’m now concerned, a Broadway treasure we must protect at all costs. Not one bit buried by her throaty evocation, that characteristic voice which Block pulls off with as little caricature as possible, she is ever a match for the dominating personality of Cherilyn Sarkisian, portraying the diva (or star, as her character name suggests) with grace, reverence, and the best voice you can hear on Broadway right now. Only a drag queen could do it better.

If Block and her team of younger Chers, of whom Micaela Diamond as Babe is an enthralling new actress, take their turns sharing the artist’s spotlight, there’s one figure who never leaves this stage: Bob Mackie. Cher may be on the marquis, but he is as much a star of this production as the singer who he has so famously dressed. As production costume designer, Mackie has recreated all of Cher’s most iconic looks, from the 1974 Met Gala jumpsuit, to every Egyptian goddess costume and iteration of the “If I Can Turn Back Time” biker jumpsuit, to the greatest Sonny and Cher camp and yes, of course, the Oscar Mohawk. For all the musical’s glaring structural missteps, that Bob Mackie chronicles its narrative with a visual history of Cher is a singular silver (or perhaps sequined) lining in this production — albeit a fashion show set to music, which doesn’t really equate to theater.

It’s not hard to caress an audience with the warm embrace of nostalgia. You can hear an audience settle into recollection, a soft hmm and a few ahhs when a favorite tune plays in every other Broadway jukebox. The first chords of “It’s Too Late” in the Carole King musical box “Beautiful” always get me. And that “The Cher Show” succeeds in inoculating its audience with a wistfulness for the sounds and fashions of this diva should be no gold star. Surely that’s the bare minimum.

But there’s something to be said for the first seconds of “I’ve Got You Babe,” Jarrod Spector’s Sonny a remarkably uncanny evocation of the iconic voice that’d be mostly hilarious if not braced by an incredible tenor. There’s something to be said for that loving feeling, returned to an audience however caked in glitter. Maybe it’s shmaltz and maybe I’m a fool, and it’s certainly not enough to make “The Cher Show” good theater. But it’s fine enough as the first chords of an iconic song ring in, a small comfort to be momentarily in the presence of what makes Cher great: her music, not some hopelessly humanizing Broadway creation.