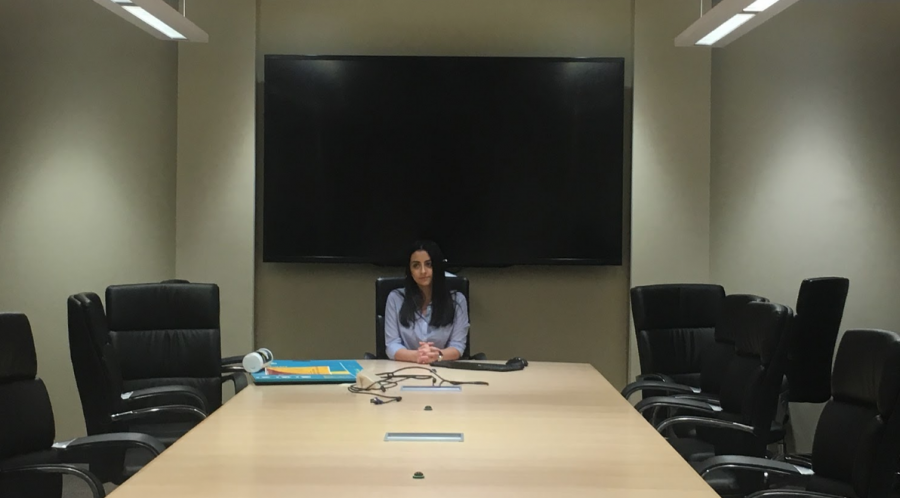 Mariam Wahba, the sole attendant of the Witt/Kieffer student information session in the search for a new dean of FCLC. (CARMEN BORCA-CARRILLO/THE OBSERVER)

By ALEJANDRA CARRASCO and CARMEN BORCA-CARRILLO

As the fall semester winds to a close, Fordham Lincoln Center (FLC) is ramping up for yet another search for new leadership: this time, to enter the Office of the Dean of Fordham College Lincoln Center (FCLC). Despite attempts to include community voices in the decision, the search’s current state of affairs shows little promise for further student involvement.

The new dean follows a 20-year tenure in the position set by Robert Grimes, S.J., Ph.D, Fordham University’s longest-serving dean. Following Grimes’ departure in spring of 2018, the college has run under the eye of Interim Dean Frederick Wertz.

On Wednesday, Nov. 28, Judy Kelly, administrative assistant to the dean, sent out an email on behalf of Dean Anthony Davidson, spokesperson for the search committee, inviting all FCLC students to a meeting on Friday, Nov. 30 regarding the search for the new dean. The purpose of the meeting was for students to meet as a group with a representative of the executive search firm Witt/Kieffer, Sheila Murphy and her associates to discuss the “opportunities, challenges and vision of FCLC.”

The search committee consists of two components: a faculty search committee comprised of professors from different departments across FCLC and a search team from Witt/Kieffer. The firm is also heading Fordham’s search for a new provost, due to conclude in January 2019. This search marks Witt-Kieffer’s 14th search for FCLC, but their first finding a dean.

Though the Nov. 30 meeting was open to all students, only three attended — and only one was not a reporter.

“I thought there were going to be more people here,” said Mariam Wahba, FCLC ’20 and the meeting’s only student not on assignment. Though she was supposed to be working during the meeting time, she requested time off from her supervisor to attend. “I’m here because the decisions on the new dean are going to affect me,” she said.

While students cited multiple reasons for not attending, one confusing detail was the address given in the email of “Law School, 140 W 62nd Street, 4th floor, Room 460.” Though the meeting did in fact take place in the 140 West building, the preceding “Law School” tag led every student attendee to the Law School on the other side of campus. According to Wahba, a secretary in the law school had already told someone before her that the address was incorrect, indicating that at least one student was discouraged from attending the meeting due to the email’s incorrect address.

Emma Quinn, FCLC ’20, was also put off by the invitation and said the email’s format and wording made it seem as though it “was a specific invitation to me for some reason, not necessarily an open hall, but a special focus group.”

She also criticized the meeting’s timing, noting that on Friday afternoons, most students are either in class, unmotivated to remain on campus after class is over or simply “done for the weekend and don’t want to go to another meeting.”

Students also expressed that their hesitancy to attend stemmed from frustration with the meeting’s premise. “Going to this meeting wouldn’t have done anything. I feel like it was more of a formality,” Keil said. “It takes so long to get anything done, and student input, if it is asked for, I’ve never seen it taken very seriously.”

Though the meeting brought out fewer students than the semester’s earlier provost forum, Witt/Kieffer representatives continued the session by asking the attendees questions about “who is FCLC, and who its dean should be,” including topics like life in the residence halls, why students chose the Lincoln Center campus and the presence of the dean in everyday student life.

Importantly, a major focus of the conversation concentrated on students’ “pain points” with the campus. Murphy and her associate, Robin Mamlet, seemed to have heard of most of the grievances aired prior to the meeting, including concerns about transgender, gender non-conforming and intersex rights on campus, obstacles complicating advising and dissatisfaction with dining services.

Those at the meeting were encouraged to share their experiences on campus, but, as the last session of the day for Witt/Kieffer, they felt rushed — Murphy left for a flight 10 minutes into the meeting, while Mamlet rushed to catch a train at precisely 4:30 p.m.

Prior to the student session, Murphy and Mamlet had spent the day meeting with the faculty search committee and class deans. Murphy reported most members of these groups seemed to keep the recent findings of the Reimagining Arts & Sciences working group close at hand and called the report’s timing with the search “a great convergence.”

Yet, despite confirmations from Witt/Kieffer and the faculty search committee that the search for the dean is well underway and open to input from the Fordham community, members of the firm and the committee redirect inquiries to the search’s spokesperson, Anthony Davidson, dean of the School of Professional and Continuing Studies.

Because the meeting was mainly focused on the attendees’ answers to the questions asked, the goal was for students to be able to voice some of the qualities they would like the new dean to embody. Disparities between the Rose Hill and Lincoln Center campuses anchored the discussion: an important takeaway focused on how the new dean should see FCLC as almost a separate entity and not as a branch off of the Rose Hill campus. Murphy emphasized that the new dean should, “recognize qualities, Lincoln Center qualities, that can’t be Rose Hill qualities.”

The general consensus of the committee members, including chairman dean Davidson, is that the new dean of FCLC has to understand the character of FCLC — its advantages and disadvantages. One of Davidson’s priorities during the search is, “making sure that different views and inputs are properly represented.”

Currently, Davidson said, the committee is in the process of building the ideal candidate’s “leadership profile.”

The new dean is expected to begin working no later than next fall, though Davison also warns that the date may fluctuate depending on “prior commitments that the successful candidate may have.”

According to Davidson, hiring Witt/Kieffer as a private firm to conduct the search enables the university to move beyond the “conventional ways of recruitment” and utilize the firm’s “large database and network of potential candidates.” Additionally, Davidson said, the firm’s staff with “[facilitate] the widest and maximum interaction with the Fordham community,” thanks to the ability to “be more expressive” with members outside the administration.