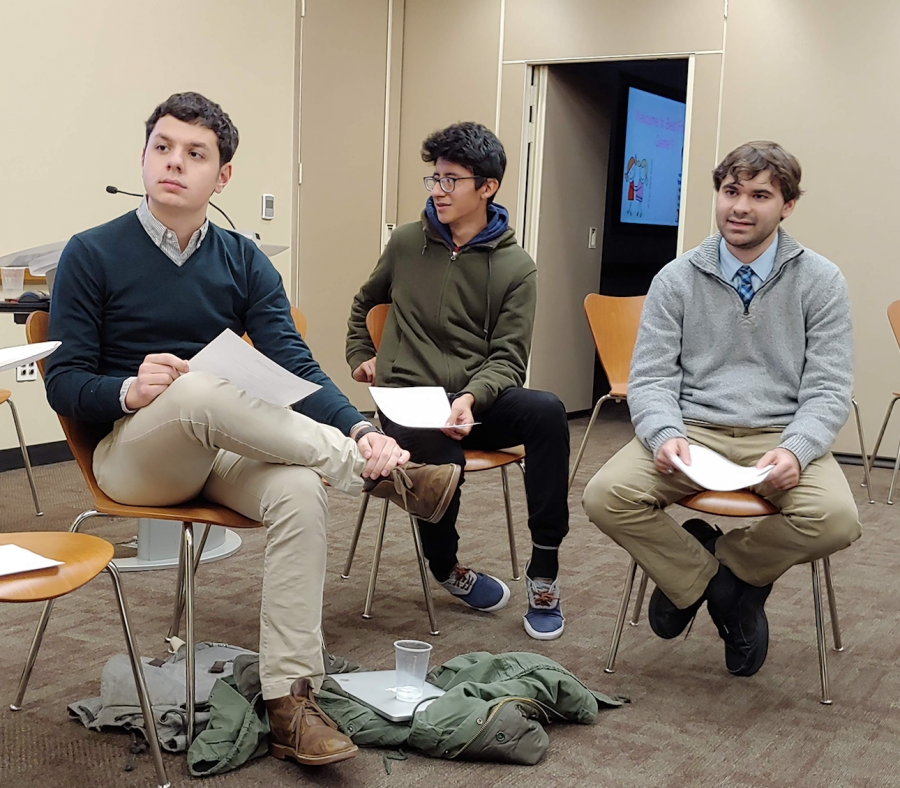 United Student Government (USG) President Demetrios Stratis, Fordham College at Lincoln Center (FCLC) ’19, remarked to the 11 students present at the Nov. 28 town hall for upperclassmen: “I have to be honest, in all my time at Fordham, I’ve never seen a turnout like this.”

The students gathered around the conference room, quickly consumed the drinks and snacks off to the side and voiced their issues regarding the state of Fordham Lincoln Center (FLC). The number of students rose to about 20 as the event went on and, whether they were club leaders or just those curious enough to attend, there was a sense of exasperation in the room.

Recently, former Vice President of Operations Austin Tong, Gabelli School of Business ’21, resigned from the USG executive board. Stratis referred to the topic of Tong’s resignation as “the elephant in the room.”

He also announced that USG will hold a special election to fill the vacancy left by Tong at some point in the spring semester.

The tone of the room signaled frustration, especially as students began speaking on various problems around campus.

One of the issues discussed belied annoyance at the renovated student lounge. Though students had been consulted prior to renovations, the FLC Facilities committee entirely ignored them, Commuting Students Association (CSA) Treasurer Sally Mo, FCLC ’20, said. The installation of the seats and the new wall colors drew ire from members of CSA.

USG, however, had little to say on the subject other than explaining that, because of shakeup of leadership in Facilities, there was miscommunication between administrators resulting in students’ voices not being heard.

On a brighter note, Stratis laid out plans for the PL100 room — recently converted into a new public space for students — to have a “soft opening” at the beginning of the next semester.

Stratis explained that it was doubly important for there to be a new space where specifically commuter students could gather as the second floor of the Leon Lowenstein building, which was unofficially considered a space for commuters, is currently in the process of being turned into a new welcome center for prospective students.

However, students raised other concerns, particularly their dissatisfaction towards food services on campus. Despite the Ram Cafe’s recent renovation, the quality of the food, according to multiple students present at the town hall was still subpar.

In addition, students directed specific complaints at the “unfriendly” customer service doled out at the Community Dining Hall, especially in comparison to the staff at Argo Tea in the garden level of the 140W building. Workers allegedly give only a set amount and refuse to serve students additional portions unless they come back with a second plate — frustrating to the students, considering that the dining hall runs on a buffet system.

USG promised to speak to administrators about the issue.

USG Vice President Katina Smith, FCLC ’19, suggested that the e-board might be able to persuade the administration to provide a small number of free meal swipes to commuters, part of an initiative to foster better relations between commuters and residents. Several students present voiced agreement at the idea, echoing the long-standing concern that commuters have a difficult time getting to know residents.

To that effect, Stratis also announced plans to host a commuter and resident mixer at some point early next semester in order to help students get to know those who they might not otherwise have met.

Evan Sheaffer, FCLC ’21, a sophomore senator, spoke at length about various issues plaguing retention at FLC. He mentioned some common problems: lack of school spirit, lower retention rates than Baruch College and New York University and a disconnect between USG and the administration.

On that last point, Sheaffer criticized the administration for their inconsistent responses. Sheaffer explained that a significant source of frustration stemmed from the administration’s negligence to put USG in contact with the Task Force on Undergraduate Retention that University President Rev. Joseph M. McShane, S.J., formed last April.

Sheaffer said that USG constantly felt “blindsided” by their lack of input on retention and felt that the administration does not take into account any ideas that students might have on why Fordham’s retention rate is so low.

Stratis offered a possible remedy to the lack of school spirit. Next semester, he plans on creating an event tentatively called “The Battle of Fordham,” which will involve around 300 students playing a game across campus over an extended period of time. This game would involve players receiving individualized clothespins with the names of students, which they would then have pin on that student after locating them. Stratis believes that this will help students make new friends and get them roaming the campus. USG is also hosting events like “Capture the Ram” and others throughout the spring semester in order to bolster school spirit. Stratis hoped that this will “force people out of their shells.”

In addition, USG hopes to address the recent changes regarding Title IX that have come from Betsy DeVos and the Department of Education. They have a statement in the works in collaboration with a number of other Jesuit colleges and universities.

After nearly an hour and a half of discussion, the town hall ended. Before people shuffled out, Stratis remarked that this was “the first USG town hall [that finished] with a sense of satisfaction and enjoyment.” Despite the tone of frustration in the room, Stratis and USG seemed convinced of their ability to address the issues presented.