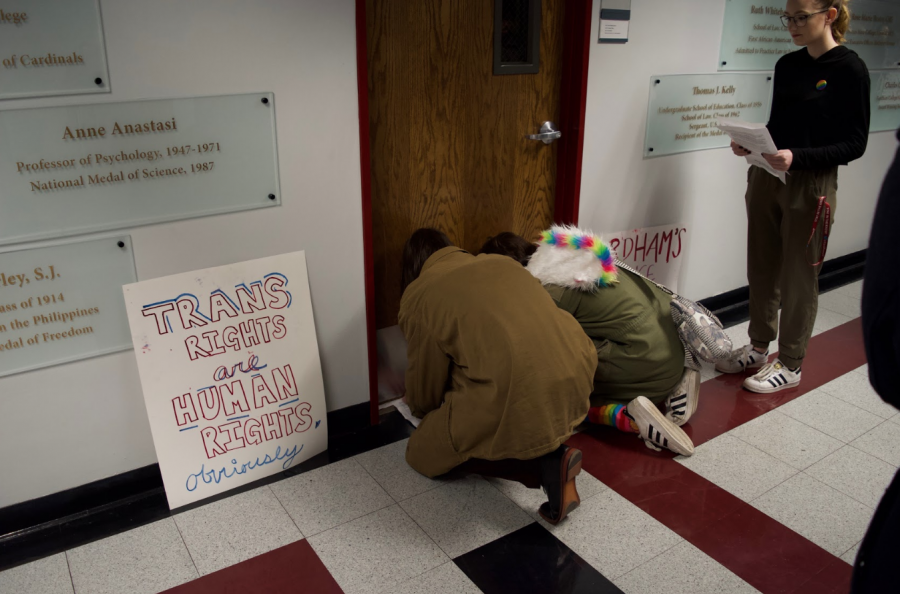 On Wednesday, Nov. 28, Senior Vice President of Student Affairs Jeffrey Gray sent an email to a short list of club leaders and faculty concerning the rights of transgender, gender non-conforming and intersex (TGNCI) individuals on campus.

In the response, Gray assured the students that Fordham University believes “transgender rights are human rights” and that both he and the university “unequivocally condemn hateful speech or actions against any member of the University, most assuredly including transgender people.”

“Transgender people (and gender non-conforming, and intersex people) have the right to be treated with the same dignity and compassion as their peers,” he continued. “They are fully members of the Fordham family, as any other member of the community.”

Gray informed the email’s recipients that discussions surrounding the process of more fully including TGNCI individuals in the university setting would “take more time and discussion” and asked for the university community’s patience.

He pointed to the labeling of restrooms as “all gender” as a significant policy change undertaken by the university and said student affairs was in the process of “taking up other issues around protections for transgender people, and accommodations of their particular needs.”

Sam Norman, Fordham College Lincoln Center (FCLC) ’18 and president of Fordham Students for Sex and Gender Equity and Safety (SAGES), told The Observer that Gray’s email is “greatly appreciated” and that those who received the email “are ecstatic to know that administration is working on a response.”

Gray’s response breaks 34 days of administrative near-silence since Rainbow Alliance penned an open letter to University President Rev. Joseph M. McShane, S.J., concerning the attacks on TGNCI rights in the United States. Eighteen days after the letter was sent, Rainbow Alliance, along with the Positive Coalition, SAGES, the Coalition for Concerned Students, PRIDE Alliance and the Coalition Against Relationship and Sexual Violence sent another email requesting a statement on TGNCI rights. Additionally, it brought attention to the fact that a flyer for the Rally for Trans Rights had been defaced 11 days earlier, with no reply from Public Safety or administration.

In his email, Gray noted that he had sent a response to the authors of the open letter within 24 hours of receiving it in which he confirmed its receipt and promised to review the letter and its “related requests,” as well as follow up with the students involved.

While Norman appreciated Gray’s response as a “reassurance of [TGNCI students’] safety,” they also expressed concern over the fact that larger university bodies still have not addressed threats against the TGNCI community.

“A response, generally, is in the works, but there has still been no public statement, no policy response and no immediate and widespread assurance that, at a bare minimum, trans students are safe at Fordham,” Norman said. “I speak for SAGES, at least, when I say this is worrisome and we don’t feel as though any of the university’s actions stand behind the words VP Gray has offered us.”

Norman also expressed concern over the email’s recipient list, as it included only students involved with the clubs who penned the open letter, department chairs and a handful of university administrators and staff. “I wonder what he is saying to admin who were excluded from his email response and members of the board of trustees,” they said.