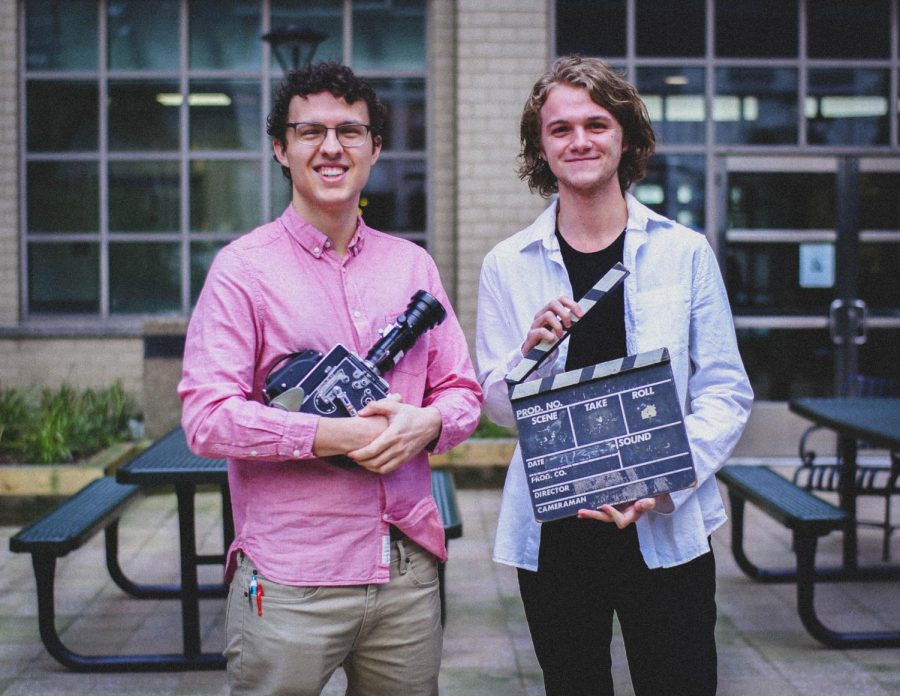 Luke Momo, FCLC '19, is the former president and founder of the Filmmaking Club and has passed on the torch to Tommy Cunningham, FCLC '21, who serves as the current president.

With more than 50 student organizations at Fordham Lincoln Center (FLC), it is challenging enough for students to choose which clubs they should join. Building one from the ground up is another undertaking entirely. During summer 2016, Luke Momo, Fordham College at Lincoln Center (FCLC) ’19, began the paperwork to create the Filmmaking Club, which he would lead for the next two years. Momo wanted to create an environment for students to gather and investigate their interests for film.

“The club is purely about the most egalitarian, democratic form of support for art,” Momo explained. “If you have an idea, come here and we’ll help you make it.”

As president of the club from its inception, Momo worked towards creating a community of students committed to film, assisting his peers with their own projects while also sharing his own works in competitions like Campus MovieFest. This past semester is the first time that Momo has not led the Filmmaking Club as president. Although he has stepped down from his position, he is still a committed member of the club, and feels it is in good hands with his replacement, Tommy Cunningham, FCLC ’21.

“I thought filmmaking could have a community here and it kind of has happened in little ways,”  Momo said on his reasoning for creating the Filmmaking Club at Fordham. “And it’s interesting to see and that’s probably my favorite part of everything that’s happened, getting to know everyone here at Fordham in any possible way who are interested in this stuff.”

Momo began a similar club his sophomore year of high school. He led that group until he graduated, but unfortunately, soon after he left, the club dissolved. Learning from his experiences there, Momo worked to create a club during his college years that would sustain itself for years after he left.

Momo noticed the benefits of having someone like Cunningham leading the group. Cunningham, a film major, has aided in increasing club membership, encouraging people from his Fordham film classes to collaborate in Filmmaking Club. Similarly, Vice President Ryan Shearin, FCLC ’21, is in the theatre program,and he has recruited many of his acting peers to appear in the films the club produces.

“You have to really reach out to the new freshmen and encourage them,” Momo said. “And for me, it’s a really far distance to go from senior to freshman, not just in terms of interests and in terms of things you like, but also just what you grew up with [e.g. certain social media platforms that weren’t popular for Momo until high school]. I think it’s important to continue having appeal by having young leaders and making them more approachable.”

Momo explained the setbacks of the anthology series, saying that it was too creatively stifling for may of the club participants. Once the leadership realized this series took away from the original mission of the club, they decided to shift their focus on individual members and what they wanted to creatively pursue. Cunningham decided to instead focus on the club’s annual 48-Hour Film Fest and encouraged each member to work on their own project. The event took place Nov. 3 through Nov. 5, in which students  shot and edited a film in 48 hours.

“That was when you got that plurality of voices and opinions in the club,” Momo said. “Honestly that was an amazing call by [Cunningham]. They had a plan written in stone [saying] this is what it’s gonna be. But he had the flexibility to be like, ‘Okay, well, you know, maybe we should go a different way based on what comes up and what you learn.’”

Momo also commended Cunningham and Shearin for increasing the number of films presented for the 48-Hour Film Fest. Last year, six films were completed for the competition. This year, there were 12, and some of the films were continued projects from the year before.

As leadership has passed from Momo to Cunningham, it is clear that there are still some issues at large. One of the largest challenges for the leadership maintaining the loose structure of the club while also teaching particular film structures to other students without creating clear stylistic boundaries. Momo stressed the importance of not caging a filmmaker’s artistic vision while suggesting these film methods. This constant push and pull regarding structure is challenging for leadership to maneuver.

When he first started the Filmmaking Club, Momo also described the challenge of diversifying its demographic. He mentioned that three members — Alison Delafave, FCLC ’19, Sami Jumper, FCLC ’19, and Audrey Fenter, FCLC ’19 — created a short film in 2017 called “BOYS Club.” The piece was a “thinly veiled satire” of an imaginary club called “Beyond Our Youthful Selves” that was full of predominantly white male members. While Momo loved the piece, he did not want his club’s atmosphere to reflect the one that “BOYS club” portrayed. Momo was optimistic about the increase in female filmmakers in the club over the past two years, as approximately half of the filmmakers who submitted work for the 48-Hour Film Fest this year were female.

For students who are up for the challenge of starting their own club, Momo recommended to start meeting as soon as possible, even if the club is not official yet.

“Use [those meetings] as a time to get the wheels turning so that by the time you do become an official club you can go from there. Just start meeting,” Momo said. “I think also if you’re going to create one, it helps to do it earlier rather than later because had I not done it early sophomore year I don’t think I would have had the energy or the time.”