Dinner with the Dean 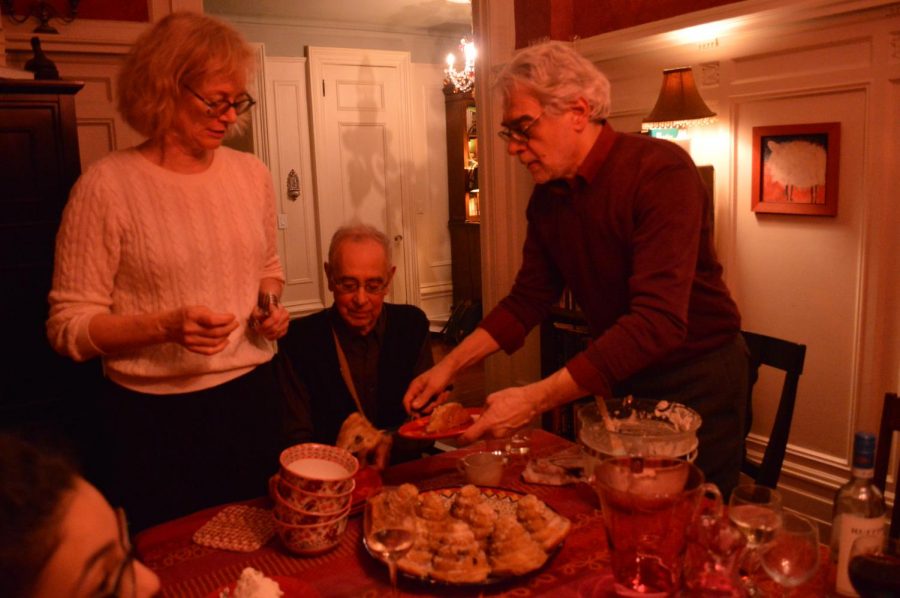 “It can be intimidating but my mom’s not going to bite your head off,” Anna Vettori, Fordham College at Lincoln Center (FCLC) ’22, said. “She’s a nice lady.”

Every Sunday night, Mary Bly, Anna’s mother and acting associate dean of Fordham Lincoln Center, hosts dinner at her home in Morningside Heights. The dinners are not only for the benefit of her family but also for her students. She invites her advisees or, really, anyone interested to come to her apartment, chat with her family and eat a full meal, free of charge. It’s something that Bly has been doing for years. The idea is strange yet oddly alluring, and it certainly holds a romantic appeal, especially for Fordham students who might be having trouble making friends.

“I think it’s pretty cool,” Anna said of the dinners. “At first, I was thinking it was something out of the 1950s. Like, a pot roast Sunday dinner? But it didn’t really end up being like that.”

Bly’s commitment to these dinners knows no bounds. Anna recalled a stretch of time when the apartment lost access to gas for six months. However, Bly did not let that impede on Sunday dinners. “We still did it with a straw bin and a crock pot,” Anna recalled.

Though they began long before University President Rev. Joseph M. McShane, S.J., created the Task Force on Undergraduate Retention, the dinners have become a model of that task force’s initiatives to improve student retention. The thinking goes that providing students with an avenue to better get to know their professors creates a sense of family and community. The free food, as it turns out, is just a bonus.

When I inquired about attending one, Bly informed me that the two then-upcoming Sundays had been booked full, a clear indication of just how popular her gatherings have become.

I arrived at Bly’s apartment building on the evening of Sunday, Nov. 18. Zoe, Her niece, answered the door. She led me inside, where Bly and her husband, Alessandro, greeted me, took my coat and offered me a drink. The home was decorated with warm shades of red covering every wall and pieces of furniture that seemed more appropriate in an Italian villa than a New York City apartment.

I was quickly ushered into the living room where I met more of Bly’s family members. We were joined by Anna and Nora, Zoe’s older sister, Gabi, Zoe’s roommate at Barnard College, and finally by Lucy, the family dog.

I sat down and was plied with questions about my schoolwork, my major and so forth. Interim Dean of Lincoln Center Frederick Wertz soon arrived, along with two of his advisees, Emma Kossoy, FCLC ’22, and Gabriella DeJesus, FCLC ’22.

Dinner was served soon after. For the appetizer, Bly and her husband served cauliflower soup that was mixed with curry; I was initially unsure about the dish, being the carnivore that I am, but I was quickly proven wrong. The entree that followed was a more traditional assortment of mashed potatoes, carrots and asparagus. Things were topped off with a delicious dessert of rum cake, heated with a blowtorch.

Conversation never let up during the meal. One moment we were talking about high school fencing teams and the next we were discussing the merits of the drinking age in the United States. Anytime that Bly spoke up, though, the topic would somehow inevitably shift back to William Shakespeare (as Bly’s love of the bard famously knows no bounds). The conversation was loose, but it seemed like the ideal version of the debates and discussions that one can have at a dinner table with family members.

Before we knew it, three hours had passed. Each person at the table was fascinating in their complexity, the discussion was engrossing and everyone was treated like they were members of a big family.

“I like being able to feel like your voice is valued by administrators,” Emma said. “It’s difficult for freshmen that don’t know anyone. You have dinners like this and it’s made very clear that [you are] valued. That’s very attractive in a college.”

Anna and Emma were both clear about the dinners’ utility as a way to make Fordham students, or anyone present, more aware of the community around them. Bly’s dinner affords them time off from school and work to inhabit an environment that otherwise would not be available to a college student living in a foreign, scary place like New York City. The coziness and warmth of Bly’s dinner table is a comfort that many students have learned to appreciate, which is exactly why they’ve become so popular.

So, did Bly’s dinner succeed in its goal? With a smile on my face and a greater understanding of the lengths by which Fordham professors yearn to connect with their students, I would say yes. It definitely did.