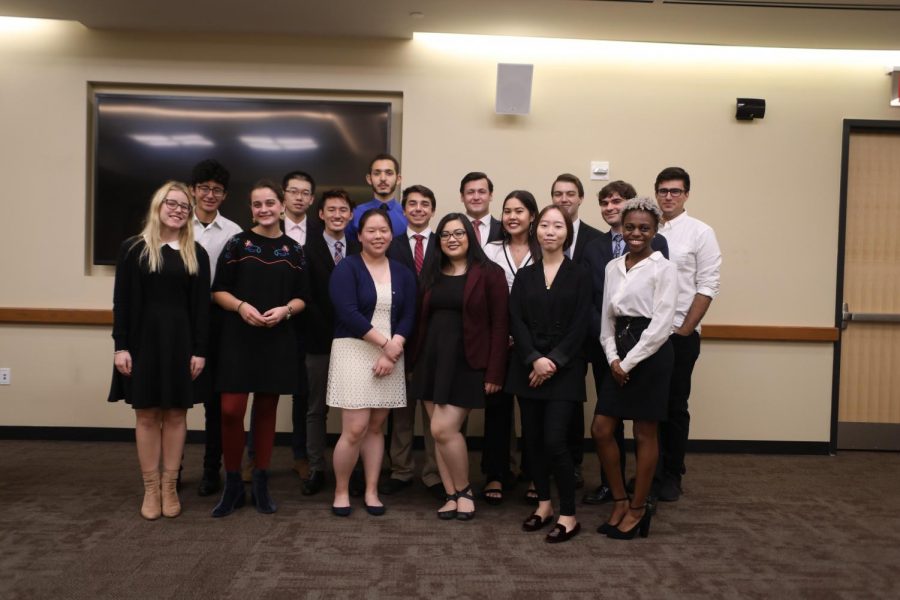 Austin Tong, Gabelli School of Business ’21, failed to attend United Student Government inauguration because he "he deemed the Inauguration unimportant," according to a USG statement.

On Monday, Nov. 19, the executive board of the Fordham Lincoln Center United Student Government (USG) met with Vice President of Operations Austin Tong, Gabelli School of Business ’21, to discuss his performance. According to USG President Demetrios Stratis, Fordham College at Lincoln Center (FCLC) ’19, Tong was responsible for triggering the USG budget freeze the previous week due to his failing to complete his club leader training on time and had been neglecting many of his USG duties. In particular, Tong had missed a majority of the e-board meetings and rarely responded by email or text, thereby failing to properly communicate with members of USG.

A USG statement released late in the evening on Nov. 20 said, “Mr. Tong also failed to hold weekly office hours within the USG office … Mr. Tong was also the only member of USG, the e-board and the senate, who failed to attend the USG Inauguration, although he was present on campus at the time of the event. To the Operations committee, he gave the reason for his lack of attendance as the fact that he deemed the Inauguration unimportant.” It was also pointed out that Tong failed to plan the Club Leader Networking Dinner, which caused the event to be canceled.

Despite this, members of USG were hopeful that the aforementioned meeting could result in a better working relationship between Tong and the others.

Instead, Tong resigned from USG during the meeting.

Speaking about the meeting Stratis said, “We wanted a chance to sit down with him and talk about his performance … and come up with binding expectations for everyone.” Stratis explained that members of the e-board had become upset with Tong’s performance, particularly because the budget freeze caused events that USG had been planning to lose funding, though that funding was restored after the freeze ended.

“There was a lot of bitterness and unhappiness going on in the board,” Stratis said. “We needed Austin to come to a meeting.”

Stratis said that the e-board had each prepared testimonies for Tong. “We were supposed to speak to him personally,” he said. “It was supposed to be a healing thing.” However, he also noted that censuring, impeachment and resignation had been possible options, depending on the outcome of the meeting.

During the meeting, Stratis claimed that Tong apologized for some of his behavior and was upset about the recent article in The Observer that spoke of his role in the budget freeze. “He wasn’t happy that some people on the board had these disagreements with him and, in light of what had happened, he felt it in his best interest to resign,” Stratis said. “He no longer wanted to serve as the VP of Operations.”

Stratis said that while Tong’s position remained vacant, the Operations committee would report to him, though they have plans to appoint an interim chair soon. “Whether that person fills in Austin’s capacity,the e-board will probably wait until a special election when we come back [from Thanksgiving break],” he said. However, because this timeframe coincides with final exams, Stratis said that it is likely that they might have to postpone the election until after the end of the academic semester.

According to the USG constitution, missing three meetings — which Tong had done many times — results in impeachment. Stratis explained why Tong had not been impeached: “It doesn’t say specifically in the wording that it refers to e-board meetings … we’re changing the language in the constitution to be a lot more specific. If you’re in the e-board, you’ve got to come to meetings.”

In a post on Instagram, Tong stated, “Because of political motives, certain bureaucrats have pushed us out of vice presidential office. We advocate swift and representative action in the true interests of the masses, while those who empty talk are ineffectively allocating our tuition money to wasteful use and taking for granted the trust of the people.” He also stated his intention to continue being a student representative in the spring semester.

“Austin is angry,” Stratis said in response to the Instagram post. “Of course he’s angry. If I were in his position, I’d probably feel very bitter. I believe there is a price to power and some people aren’t able to pay that price.”

“I wish Austin the very best,” Stratis said. “USG will endure. The Operations committee will endure. We’re going to continue by our promises and the things we’ve said we’ll do. This doesn’t change anything.”

The Observer reached out to Tong for a comment. In an email, Tong stated, “The People do not accept the false and inaccurate reporting of a biased reporter with political motivation and bureaucratic conspiracy.”