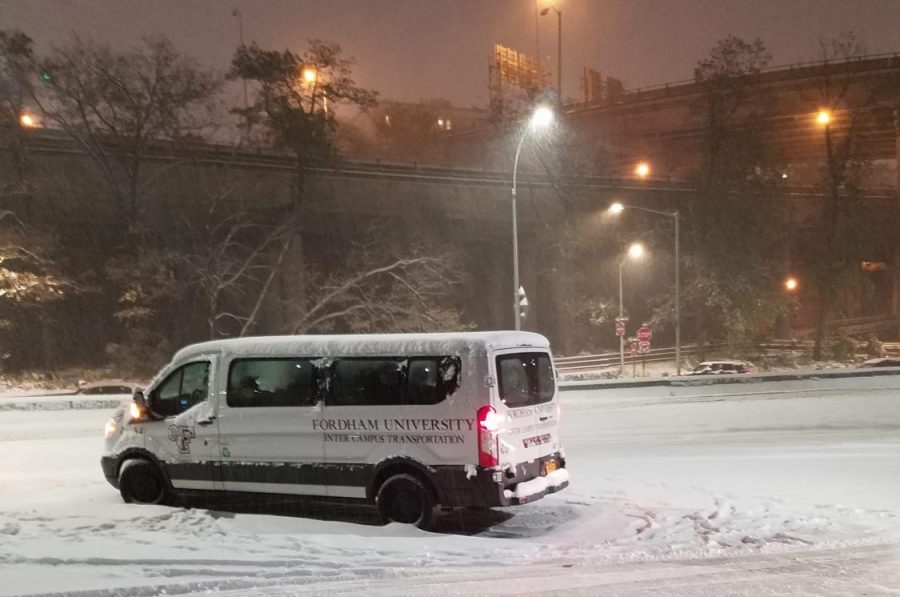 Paul Bury, Fordham College at Lincoln Center '19, was stranded on the Henry Hudson Parkway for around three hours.

The Ram Van, in tandem with a severe weather alert from public safety, officially suspended service at 5 p.m. Thursday, Nov. 15 due to “deteriorating weather and travel conditions” throughout the city. Public safety, however, was unable to account for vans that had already departed and subsequently became caught in the midst of the snowstorm.

“It was a pretty scary experience,” Kayaian said of the ride. “We were stuck for about two hours on the West Side Highway near 181st Street before we were finally able to start moving again.”

As her van was approaching the Rose Hill campus, Kayaian was let off near the Metro North Fordham train station, which she uses to commute to school from Westchester.

Paul Bury, FCLC ’19, had a similar experience. He shared a “survivor’s log” of his journey via Instagram stories. “I have a water bottle and tangerine for rations,” one post, in which Bury looked out a fog-stained window from his stranded van, read. “8 people on board.”

Like Kayaian, Bury was stranded on the Henry Hudson Parkway for around three hours. “We were told the university sent a couple of Toyota Sequoias to pick us up,” Bury said. The rescue convoy never arrived, however, though his van was ultimately able to start moving again.

Bury’s van actually stopped to let people off at the Van Cortlandt Park subway station in the Bronx to allow students who no longer needed or wanted to travel to Rose Hill to take the 1 line back to Lincoln Center. Bury and the other students who did so had to provide their Ram Van driver with their names and phone numbers.

“I’m just hoping I can get my e-ticket back,” Bury said.

The Ram Van office was unable to comment at the time of publication.