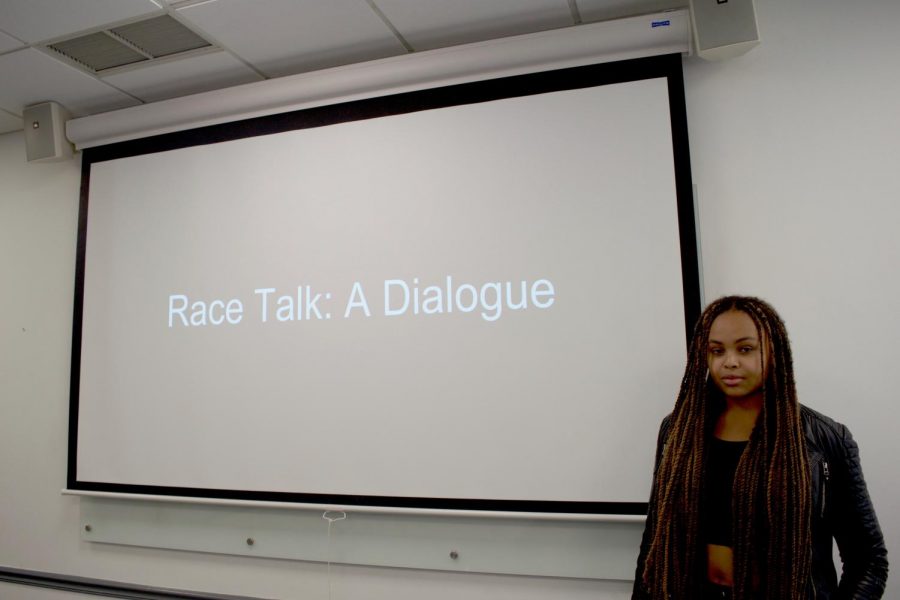 "Although talking about race might be uncomfortable, we need to get uncomfortable if we want anything to get better,” Maya Levy said at Race Talk.

On Oct. 24 and 25, students gathered to address race relations both on and off campus.

The meeting, organized by Maya Levy, Fordham College at Lincoln Center (FCLC) ’19, with the help of the Residence Hall Association (RHA), was structured in a conversational manner. Students that assisted Levy in organizing the event facilitated an environment in which participants could express their honest opinions concerning facts and events on race in modern society and be met with understanding rather than apprehension or condescending disagreement.

In light of the 2016 presidential election, race relations at large have come more clearly to light a prevalent issue, and the necessity for dialogue, Levy said, led her to take initiative and bring the Race Talk, two years in the making, to the Lincoln Center campus.

“Lincoln Center had been open for almost 50 years and not once had the administration thought it was necessary to provide a required dialogue on race relations and diversity,” Levy said. “I felt that given the state of our country, no one in the administration was pushing for empathy or understanding and neither was Fordham, so I felt like I had to.”

The 30 questions — such as whether or not participants think racism is still a prevalent issue — presented as points of discussion were chosen with care. They began to encompass the vastness of race issues in America by taking perspectives from both majorities and all minorities, not solely the African American population in the U.S., but communities such as Native Americans, Pacific Islanders and the South Asian community as well as the Eastern Asian community.

By separating into six separate circles, everyone involved had the opportunity to discuss each question both in smaller groups in which individual opinion could be heard to a greater degree, and in larger groups to open the floor to a variety of viewpoints. The questions were formed through a survey of students around the university asking what they would like to discuss concerning race. For the students involved in organizing the event, this proved insightful in determining exactly what people wished to talk about in an event of this nature as well as what many felt could not or were not discussed daily.

While such conversations can initially seem charged and uncomfortable, Levy pointed out during the conversation that if people cannot move forward with them despite this initial inertia, the issues surrounding race cannot not be addressed to their full extent.

As the talk unfolded and people of various racial and ethnic backgrounds explained the context of their own lives to one another, this network inevitably became cause for a greater understanding between participants in the conversation. Even as a mediator, Levy said that she sympathized with the experiences of others and appreciated that people from different backgrounds contributed openly and honestly to the conversation.

I was actually excited when there were individuals in a session who didn’t necessarily have a traditional understanding of race relations in this country so there was room to educate them on different experiences,” she stated.

Levy found herself searching for support as she approached different organizations on campus and was told that what she wanted to do could not be executed. “I initially met with administration at the Office of Student Involvement. They then kind of pushed it over to RHA to deal with and luckily they were able to give me more support. I was originally told that there was no way to involve faculty and had to push to change that as much as I could over the last two years.” she explained.

Levy wished she could have garnered more faculty support as well as further incentivized students to attend the event.

There was little room to address the incident in which a Fordham University Rose Hill Student drew a hate symbol on campus property, announced on Oct. 24, 2018, but had occurred a day earlier. Still, a section of the talk was dedicated to hate crimes that have occurred on campus through the past four years. Those participating in the talk were provided the opportunity to communicate their feelings as they heard about the incidents, or reflect on their experiences when the occurrences were announced. Within individual groups, participants were more comfortable speaking on the event they felt most strongly about, which sparked a larger discussion on the impact of these crimes on those witnessing and experiencing them.

Reflecting on the conversation, Levy hoped participants left with a realization. “The problem with race relations isn’t with any one person,” she said. “It’s a people issue.”

“If the university wants to focus on caring for the whole person,” she continued, “then it is important to give the students a place to foster empathy and understanding by engaging with their experiences. Although talking about race might be uncomfortable, we need to get uncomfortable if we want anything to get better.”

Correction: The administration tailored the American Pluralism course to provide ongoing academic dialogue about race relations and diversity. As a university-wide requirement, every student is required to take the course. Symposiums, panel discussions and events have also been held to promote discussion at the Lincoln Center campus.