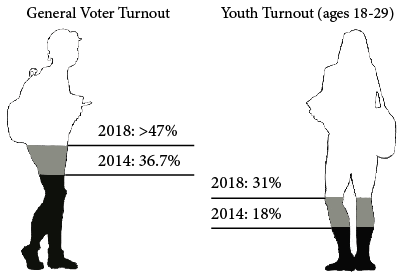 Turnout for the midterm elections in 2018 was significantly higher than its 2014 counterpart.

If you’re anything like me, you probably have been swallowed up by the “get out the vote” effort this year, the #BlueWave drowning your social media feed and sweeping you into political fervor. You couldn’t escape it, nor should you have. The 2018 midterm elections were incredibly important, and the results will irrevocably shape our government, our legislation and our Twitter feeds for the coming years. And not just because Taylor Swift posted on Instagram about them.

But now that you’ve voted, what do you do? Go back to watching cat videos?

Here’s a suggestion: Do something. Do anything to participate in our political process.

Go to protests. Show up to town halls. Heck, run for office yourself. Just do something, because it was the people who did nothing that let the hot mess that has been our government since 2016 happen. Your cat videos will be there when you come back.

We managed to do better this time around. The 2018 midterms saw the highest voter turnout in decades. Thirty one percent of 18 to 29-year-olds managed to go to the polls, a 25-year high. Of the total voting eligible population, more than 47 percent voted, the highest it’s been in 50 years. That’s astounding. This turnout allowed Democrats to take back the majority hold on the House of Representatives, win crucial gubernatorial races and install more women, people of color and veterans than ever before at every level of government. It just goes to show that if you work for a democracy, democracy works for you.

By no means are American liberals out of the woods. Democrats lost seats in the Senate and lost many races they expected to win on Tuesday. Mueller, the Special Counsel who is investigating Trump for corruption and collusion with Russia, is in danger. The trade war with China has only intensified. We have not been able to resolve any of the crises gripping our government today. Even though taking back the House is a significant step that deserves praise, the road ahead won’t be easy and it will only be hindered by people too lazy or too idealistic to participate in the world of imperfect choices that is American democracy.

Voting isn’t a ball you can drop or a game you can stop playing. You can’t just vote once and expect to see the results you want for generations to come. Voting is our duty, our right and the very heart of what it means to be an American.

We get to choose our own future. It’s time to appreciate that.

It’s great to have voted in the past election, but we must carry that momentum forward and vote in each and every election like it’s the last election of our lives. For some — DACA recipients, transgender people and other minorities under siege by the Trump administration — it very well could be.

And we all know what 2020 will hold. The only way to take back our country from the insanity we’ve been presented with is to rebuild our government with honest, compassionate politicians on every level, and every vote counts. If you’ve ever wondered how you would act during an American crisis, don’t wonder any longer. The time is now, and the choices are yours. Choose to vote.