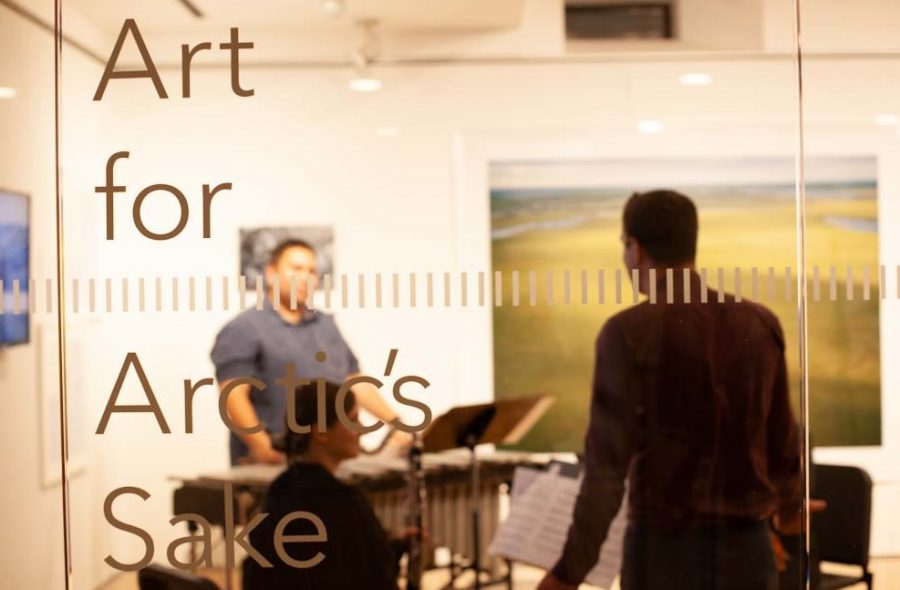 "Art for Arctic's Sake" was the result of six weeks of collaboration between students, professors and artists.

This exhibition, intended to demonstrate the harmful results of climate change through art, has been entirely assembled by students in the class. Both Isaak and Carleen Sheehan, a professor in FCLC’s visual arts department, reached out to 11 professional artists who are involved in the exhibition. After that, it was in the students’  hands..

Isaak refers to the class as a “professional practice course” because of the tremendous amount of work that goes into putting the exhibitions together. Unlike a traditional internship, in which students may be told to run errands or do paper work, the class provides students with the ability to do just about everything a museum curator does. This includes designing the arrangement of pieces in the space, learning about the art, designing the website and setting up the exhibition space.

Although they had six weeks to put the exhibition together, students and professors in this contemporary art class struggled to meet deadlines, something that is often an unfortunate reality in actual art museums. As soon as the class found out when the gallery space would be available, they were forced to speed up the process to ensure that all of the details included in the space and the details online would be ready in time for the show’s opening. The students also designed the postcards and posters that advertised the exhibition and made sure those would be ready a few weeks before the show.

In addition to the physical gallery space, students created an online catalogue for a virtual exhibition. Alone or with a partner, the students chose one of the 11 artists in their exhibition and wrote an essay about them, which would be published online. This task was challenging for some because there was not a lot of information available about certain chosen artists. If students were not able to contact their artists, they had to rely on the styles and images of the art pieces themselves to get an idea of who the artist is. Students put a lot of time and effort into this essay not only because it was their first publication, but also because, as Isaak said, “it will be read by many people, including the artists, so there is a lot of pressure on the students to do a good job.”

To Fostano, the online exhibition is extraordinary in helping students better showcase their artistic discoveries and hard work. This exhibition on climate change gives students in the class the opportunity to present their artwork and have their work published for the first time online. “Most of the time student papers are written, they are edited, and then they are discarded, thrown in the garbage,” Fostano said. Unlike essays in other classes, this project will hopefully provide students with a paper that they can be proud of and use as a resource if they choose to pursue a career in the arts later on in life. “We are giving the students the actual opportunity to showcase that work and really, to build a portfolio so they can take it beyond the classroom,” Fostano said.

Though the climate change exhibition project took many weeks to put together, the students have accomplished much more throughout the semester. The class went to the Cooper Union where they learned about museums in Africa. They saw practices much different than what is considered traditional in museums of the U.S. Museums in Africa include traveling vans and kiosks along with performance spaces. The class also took a trip to the New Museum and met a woman who was the Italian curator of a new realism showcase which incorporated ordinary old boxes from a cupboard into the exhibition. In embarking on these field trips together, students learned the infinite number of possibilities for what a gallery space in a museum could be, as well as the incredible amount of work involved in organizing such spaces.

As I walked into their classroom, it was clear that the students were extremely passionate about the class. Two-thirds of the students in the class are undergraduates while the other third are graduate students. These six graduate exchange students from Italy are the first students to be part of Fordham’s exchange program with Italian universities.

Rebeca Castilho, FCLC ’20, loves the communal atmosphere of the class. “It’s a class that we have to communicate and make executive decisions together,” she said.  Exhibitions are put together through an immense amount of organization as well as collaboration. By working together closely, “we kind of also have this community going which I think is really cool that sometimes I don’t have in my other classes,” Castilho said.

Other students in the class said that coming to this class has made them more aware of what takes place behind-the-scenes in exhibitions. They are now more appreciative of exhibition designers when looking at art pieces in galleries and museums.

“What I personally have learned through all this background work is the kind of strenuous labor that goes into producing a final product that has to look like there isn’t that much work,” Annie Muscat, FCLC ’20, said.

Ultimately, both the students and professors hope that the months of hard work in putting the exhibition together pays off in bringing the audience’s attention to the harsh realities of climate change. Fordham has students who can effectively bring about change by raising awareness about what is happening to the environment.

“I feel like students now are coming up with the best ideas of how to approach these problems. I find that students have very grassroots good ideas to help,” Issak said. “And also, there is an enormous amount of student interest in the topic, obviously, because they are going to inherit this mess that has been made.”

In putting together varied-medium shows like these, students and artists at Fordham help to make a major issue more accessible to the public eye.

The exhibition will remain open until Jan. 15, with a portion of it available to view online.