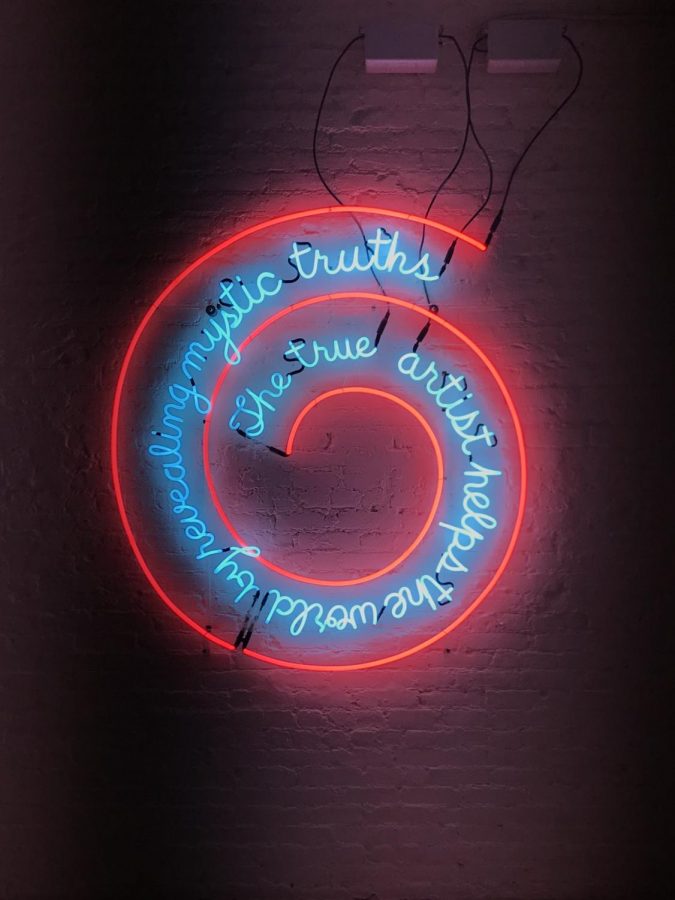 There’s no wrong time to go to the MoMA. The main location on 53rd Street is always good for a rainy day, with its six floors hosting a constant stream of exhibits, as well as its permanent residents including van Gogh’s “Starry Night,” Lichtenstein’s “Drowning Girl” and Warhol’s “Golden Marilyn Monroe.”

But when it’s a beautiful, brisk November day and you have a few hours to kill before you have to buckle down to study, you can head to Queens. MoMA PS1 has a rich history and is full of hidden gems, but its current exhibit glitters and gleams extra brightly: Bruce Nauman’s Disappearing Acts.

The installation is split between both MoMAs, though the majority of the works are at PS1. It combines Nauman’s broad and extensive collection of works into two extraordinary museum experiences, complete with pastel-colored neon lights; eerie, homemade video clippings; and even severed, plastic animals. Intrigued yet?

The whole exhibit was horrifyingly beautiful; Nauman has a special way of making you feel as if you’ve left our universe and are now in an entirely new one, turned completely upside down and backwards. Comprising all three floors of PS1, the collection grew progressively more absurd and otherworldly as the floors went up.

The museum consists of several small rooms just big enough to fit a single art piece, be it a television screen displaying an enraged clown or a pitch black room with a singular green hologram of Nauman’s face. Others were larger and flooded in light, featuring figures made of neon engaged in human activity. In fact, the first piece one sees is a large neon sign glowing blue, purple pink, alternatively illuminating the words “Violins, Violence, Silence.”

It was upon seeing that neon sign that I realized I was in for a ride, that this exhibit would be unique, the three words already radiating questions in my mind. And that’s saying a lot, coming from a family with an art dealer mother and architect father, as I’ve been dragged to galleries and exhibits for as long as I can remember, not excluding the intimidating and often suggestive ones.

Nauman’s use of multimedia throughout his work resonated deeply with me, as I myself am interested in a multitude of subjects in the arts. Throughout the show, there were films to watch, sounds to hear, texts to read and sketches to take in. The exhibit concludes with an ethereal spiral of red, with blue letters spelling out: “the true artist helps the world by revealing mystic truths.” This quote represented the message of the entire show for me, and left me feeling empowered not only as an artist, but also as an active member of society. Everyone who is feeling lost or at a loss for creativity needs to take a trip to Nauman’s show, as it will leave you feeling in touch with yourself creatively and emotionally, or neither at all as you end up questioning life itself.

If you want to stay closer to campus, stop in on MoMA’s sixth floor for a peek at Nauman’s larger works. The exhibit has a much different feel, with its enormous rooms fitting well with Nauman’s massive yet simplistic and modern works with the same oddity and captivity of the environment. One of the most popular pieces seemed to be the huge wall of kaleidoscopic words, displaying alternate forms of living and dying, with phrases such as “love and live” and “kiss and die” flashing across the wall.

MoMA (or Nauman) seemingly loves to leave visitors with memorable messages; the MoMA exhibit concluded with a room full of white, floating squares, that when passed, begin to repeat the days of the week in various voices. The room honestly seems like it was straight out of a “Black Mirror” episode. But evidently, it didn’t scare me away for very long, as I ended up back at MoMA a week later, showing my mom all my favorite pieces.