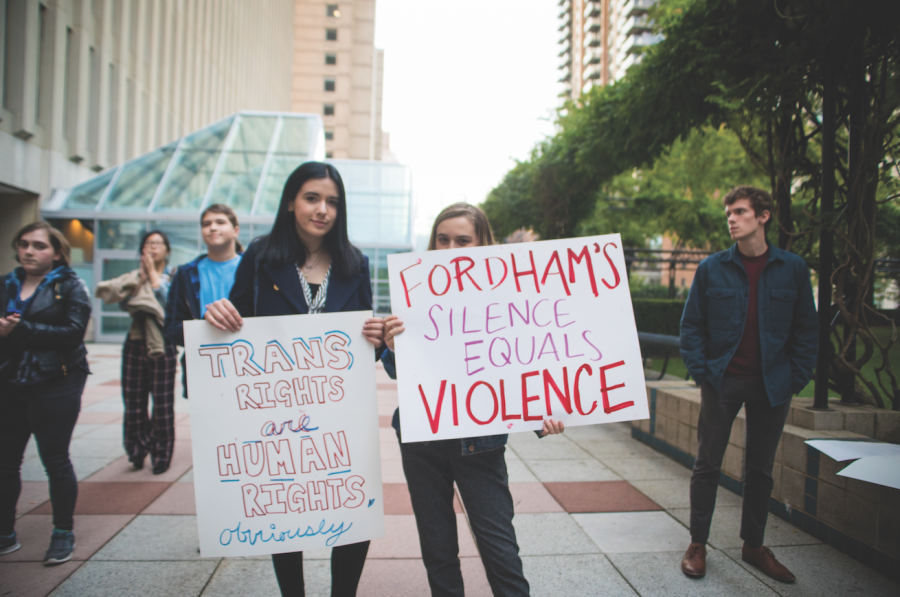 With the call and response of “What do we want?” “Trans rights!” “When do we want it?” “Now!” “And if we don’t get it?” “Shut it down!” and a roaring cheer that echoed through the plaza, Fordham Lincoln Center (FLC)’s Rally for Trans Rights officially began. The rally, held outdoors on Oct. 31, was organized by a coalition of clubs in response to the Trump administration’s recent move to confine definitions of gender to a biological conditional assigned at birth.

Members of the LGBTQ community and their allies gathered together outside the Lowenstein entrance, holding signs that read “Fordham’s Silence Equals Violence,” and “Trans Rights Are Human Rights” to show their support for those in the trans community and their frustration with the Fordham administration.

Organizers provided an open mic for anyone who felt called to speak, and a series of emotionally-charged personal stories, poems and offers of support followed.

Transgender students explained what it feels like to live in a country where their civil rights are under attack.  “When I first heard the news, my heart literally fell to my stomach,” Anthony Perez, Fordham College at Lincoln Center (FCLC) ’19 said. “Your palms get sweaty, you feel like you want to throw up, and you literally can’t breathe because it feels like someone is stomping on your chest.”

Speakers explained that transgender students at Fordham face this type of trauma every day due to what they see as the university’s transphobic practices. A pressing issue among the speakers was the perennial fight against Fordham’s policies, which entail an emotional and mental toll of living in a non-trans-inclusive space.

Many speakers shared their struggles with the Office of Residential Life. They explained how roommates are assigned based on sex assigned at birth and how the dismissal of gender identity has resulted for some in trauma and dysphoria.

Gender dysphoria is when a person experiences physical discomfort or distress in their body due to a conflict between the sex they were assigned at birth and their gender identity.  Expanding on the experience of dysphoria, Jay Sheldon, FCLC ’20, said that being treated like a man and being forced to live with other men was “not what I need,” and “not what my mental health needs.”

Another speaker recited an op-ed written by a transgender woman, Aria Lozano, who left Fordham after being forced to share a room and bathroom with men, as she did not feel safe nor respected on campus. In her letter which was published by The Observer in April 2018, Lozano said that she “feel[s] like she did not belong here on campus” because of the way she was treated.

Lozano’s letter asked: “Fordham executives: how hard can it be to change your policies to recognize us, to accommodate our basic needs or to make any effort to improve the wellbeing of TGNC people at Fordham?”

Others expressed how they felt forced to move off of campus since they did not feel like they could consider Fordham’s campus to be their home. Diamantina Kefalas, FCLC ’19, highlighted how “it can be very dysphoric to be treated on an institutional level as a gender that you are not.”

Another issue that many speakers brought up was the lack of accessible gender-neutral bathrooms on campus. Kefalas explained how she felt “unsafe, uncomfortable and dysphoric” in both the men’s and women’s bathrooms. She explained how the lack of accessible bathrooms forced her to choose between feeling safe and taking time away from class to find the nearest gender-neutral, single-stall bathroom.

In his story, Perez also discussed the lack of respect he and other trans students experience when their dead name (a name assigned at birth before a person’s transition) is still used on their Fordham student ID or announced in classes.

These policies result in transgender, gender non-conforming, non-binary and queer students feeling completely isolated. “This does not feel like our school, and Fordham has made that very clear,” Kefalas said.

As an example, speaker Eliza Putnam, FCLC ’19, highlighted how there was no recognition or statement of support to trans students in light of political events.  Since University President Rev. Joseph M. McShane, S.J., often sends emails to the Fordham student body regarding world and national news, the university’s silence on the topic was seen by many as another example of their disregard of trans’ rights. “How hard is it to write an email?” Eliza Putnam asked, in frustration.

Throughout the event, speakers did highlight how dehumanizing and disrespectful policies can be changed, and that these problems can be fixed. “These are problems that can be solved by some easy policies changes,” Perez said. “You literally have to write a note and sign it. It takes none of your time, none of your money — literally only five minutes.”

The rally ended with a handout of an open letter written by several on-campus support groups, including Positive Coalition, Rainbow Alliance, Students for Sex and Gender Equity and Safety, Coalition for Concerned Students, Fordham OUTLaws, PRIDE Alliance, Coalition Against Relationship and Sexual Violence and Women’s Empowerment. The letter included a series of demands to further support trans student rights on all Fordham campuses.

Supporters then marched silently into Lowenstein — meant to reflect the silence that trans students have received from Fordham’s administration —  and delivered the letter to the Fordham vice president’s office on the second floor.

After the rally, organizers offered a safe and healing event for the trans, gender non-conforming, non-binary and queer community and their allies in the Student Lounge.

Since the event, Senior Vice President of Student Affairs, Jeffrey L. Gray, has confirmed that the open letter was received, to which he replied on Nov. 1: “I will review your letter and the related requests in contains, discuss these matters with my staff colleagues, and we will then follow up with those students in your organizations who we are in contact with.”

Gray explained to The Observer that the “complicated set of issues” the open letter brings forward “will take us some time and constructive dialogue to work our way through.”

The universal message from the rally and the following healing space, was that if you are a transgender person at Fordham and feel unsupported by the administration, there is a community here who supports you.