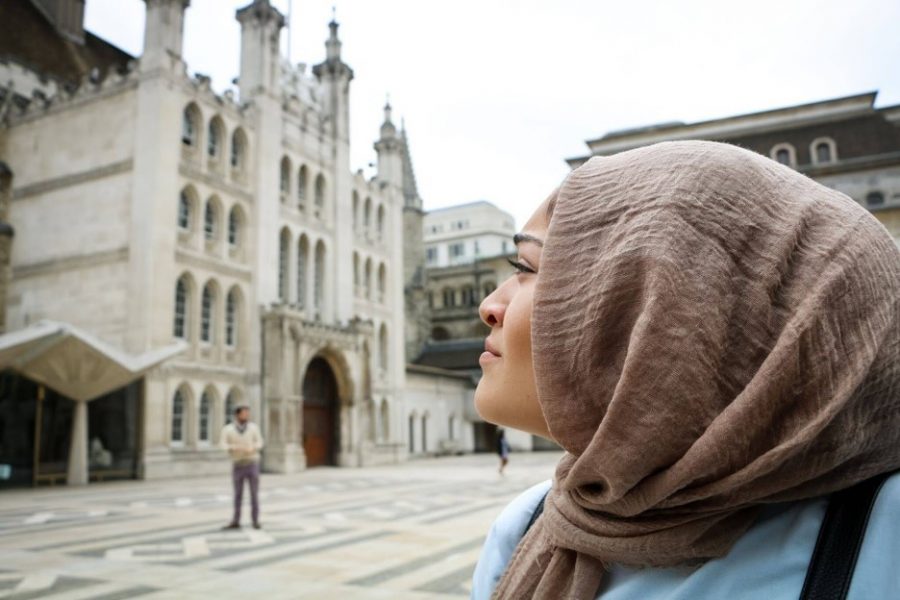 "The appreciation I found for literature in London restored and confirmed my decision to complete a bachelor’s degree in English." (GUMANA ATTAL/THE OBSERVER)

“Hop across the pond for a semester abroad in London!”

As I looked at the flyer on the third-floor wall, I got the feeling that London was where I needed to go.

“Hey Gugu, can you help me with this essay? You know you’re a lot better at this than me.” Even though I was still in my senior year of high school, my older sisters, who were already in college, would often seek my advice on writing pieces. Out of the four of us, I was definitely the most confident in writing papers for English class. A lot of this had to do with my avid fascination for literature and the consistent after-school tutoring sessions I had with my English teachers. Being able to give my sisters pointers on their writing always made me feel special. I found comfort in having to set time aside to read their work and discuss possible revisions. A part of me also enjoyed feeling like I wasn’t just the youngest sibling, but an individual with a talent worth valuing.

Then things changed. My sisters eventually finished their liberal arts classes, deciding to pursue STEM professions. I felt like our shared space was getting smaller and smaller, until it was completely nonexistent. I had to face the inevitable truth: there was really no need for my literary finesse or essay writing abilities anymore. As my sisters became immersed in the world of medicine, biology and chemistry, they wanted me on their path, but I knew I needed to continue on mine.

“Are you sure you want to do this forever? I mean, I get that you liked English in high school, but it won’t really be very rewarding after college, will it?” This was a question that my sisters continued to burden me with when they realized I wasn’t moving away from English after my freshman year at Fordham University. Except, I knew that becoming an English major was the most suitable path for me, despite my sisters warnings.

It wasn’t a particular book or author that pushed me towards the English major. It was the environment that my high school English teachers managed to foster; sharing a classroom with 20+ students and communicating our thoughts and perspectives built a safe space that was not rigid or competitive. Working together meant getting collaborative ideas out into the universe or onto a piece of paper.

I knew that I wanted to dedicate my years at Fordham to building and maintaining a similar environment where nothing was completely wrong, thoughts were either clear or simply in need of refining.

Except, as the gap between my world and the world my sisters chose to inhabit continued to expand, it became harder to feel proud of my English studies. The value that was once placed on my skills had transformed into a barrier that kept me from finding a place at home. It was becoming harder to remember all the reasons I fell in love with English Literature in the first place. Being able to write a solid essay didn’t feel very special anymore.

Maybe my sisters did know what was best for me. Maybe I should change my major. Maybe being an English major wasn’t that important. These are just a few of the thoughts that littered my mind as I walked down the third-floor hall of Lowenstein.

“Hop across the pond for a semester abroad in London!” The flyer on the third-floor wall managed to grab my attention and pull me from my inner turmoil.

London. I had never traveled outside of America, so a semester abroad seemed like an irrational idea. My sophomore year was almost complete and since I was done with my core classes, the following semester would be the first dedicated to higher level English courses. Should I really be doing that abroad?

Even though it seemed kind of terrifying, the thought of going to London started to feel so right. I knew it was the one city where I was sure to encounter the appreciation for literature that I had struggled to find in my sisters. While Fordham provided a solid community of English lovers, the disapproval I faced at home made it feel minimal at most.

But London was the modern world of past writers like Charles Dickens, Virginia Woolf, Oscar Wilde, and Shakespeare. I had only ever appreciated London’s aesthetic through a series of mediums like books, movies, pictures, plays and boy-bands. I had never actually thought about going there.

After seeing the flyer on the wall, I realized that I needed to get away. This would give me a break from the opinions of my sisters and help expose me to a world that I could possibly belong to.

Somehow I managed to convince my mom about three weeks before the application deadline. Through a bucket load of tears, I told her that I needed to go to London for the sake of my own sanity. I knew that being around my sisters would make it hard for me to remember all the reasons I chose to be an English major in the first place. I was being negatively influenced to think that I wasn’t doing the right thing and it was driving me insane.

So yeah. I went, and it was freaking awesome.

I took four courses that were of interest to me: London modernisms, Romantics and Revolutionaries, Victorian Fictions and Shakespeare. These classes involved reading plays, epic poems, modernist and Victorian novels. I was swimming in hundreds of pages of Bronte and George Eliot and I enjoyed every minute of it. Being engaged in conversation about London while being in London was for a lack of better words, completely inspiring.

I went on Charles Dickens walking tours, visited literary sites like the Old Curiosity Shop and the Keats house and read underneath Oscar Wilde’s memorial. I saw plays at the Globe theatre, took a stroll around Westminster Abbey and of course visited the areas that inspired Harry Potter. That’s a must.

London was the safe space I needed to reaffirm the belief that English was the right path for me because of the vibrant literary energy. I felt okay, proud even, of the choice I had made to pursue English.

When I came back home to New York, it was like nothing had changed in the time that I was gone. Everything my sisters felt still existed. Every insecurity I had still constantly made its way to my mind’s forefront. Except this time, my conviction had changed. I was sure that I was right in battling the opposition that my sisters expressed about my choices.

The appreciation I found for literature in London, without the tainting comments of my sisters,  restored and confirmed my decision to complete a bachelor’s degree in English, no matter what post-college life might entail.

Now, as a senior and English major at Fordham, I can look back on my experience abroad and be proud of sticking to the road my family had never paved for me, but that I had paved for myself. Choosing to be an English major is only the beginning of my lifelong romance!