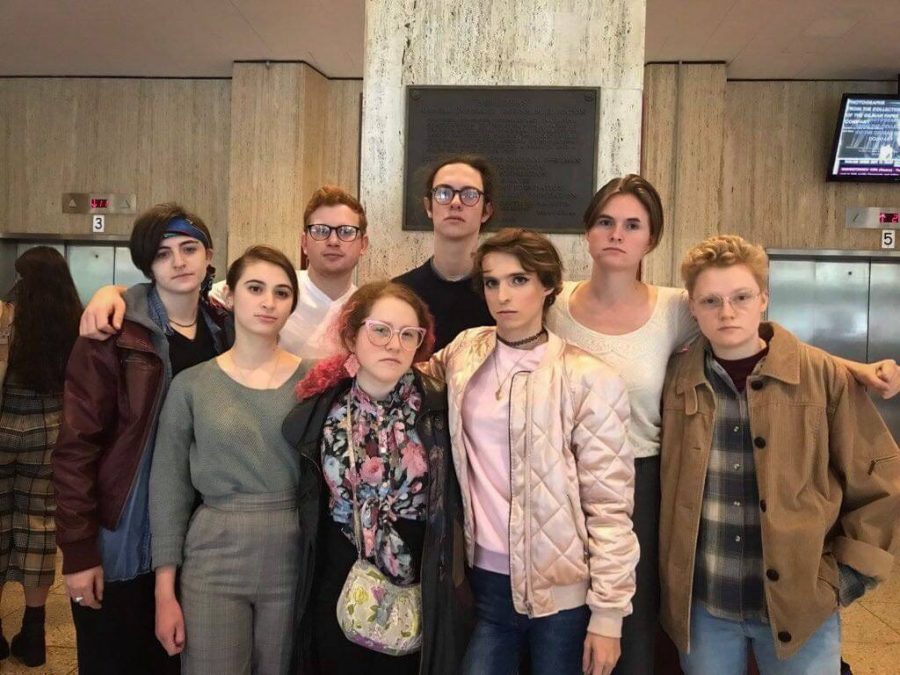 In the wake of President Trump's leaked memo that redefines the term “sex,” Fordham undergraduate and law school activist groups penned an open letter addressed to the Fordham community on Thursday, Oct. 25. (COURTESY OF KRISTEN GIAIMO)

On Sunday, Oct. 21, the New York Times leaked a memo from President Donald Trump’s administration outlining a new initiative that would redefine the term “sex,” effectively delegitimizing the identities of an estimated 1.4 million transgender Americans if passed. In the wake of the publication of that article, on Thursday, Oct. 25, Fordham undergraduate and law school activist groups challenged Fordham’s own views on non-binary gender identities.

The undergraduate clubs at both Fordham College at Rose Hill (FCRH) and Fordham College at Lincoln Center (FCLC) and the School of Law penned an open letter addressed to Fordham students, faculty, staff and administration. In the letter, students called upon Fordham to support the transgender community publicly and “resist transphobic rhetoric.”

Contributors to the letter include FCLC’s Coalition Against Relationship and Sexual Violence (CARS-V) and Rainbow Alliance; FCRH’s PRIDE Alliance and Women’s Empowerment; FCLC/FCRH’s Positive Coalition and Students for Sex and Gender Equity and Safety (SAGES); and the Law School’s Fordham OUTLaws and Coalition for Concerned Students.

All were signatories with the exception of OUTLaws, which serves as a resource for a supportive, LGBTQ-safe environment for law students.

The letter demands Rev. Joseph M. McShane, S.J., to issue a university-wide statement in solidarity with the transgender student body and calls upon Senior Vice President of Student Affairs Jeffrey Gray and Residential Directors Jenifer Campbell and Kimberly Russell to allow students to select on-campus housing based on their preferred gender. It also implores that the academic chairs also adopt and enforce a new chosen name and pronoun policy in classrooms.

Eliza Putnam, FCLC ’19 and a student activist integral to the letter’s conception, explained that the LGBTQ activist community on campus wanted to address the localized issues of transphobia. “I can’t denounce the Trump administration for its anti-trans violence while ignoring the violence being committed in my own school community,” she said. “I know the politicians attacking our civil liberties never wanted liberation for trans and queer people, or for immigrants, the working class, people of color or women.

“While we fight against the worst impacts of the onslaught of policies from our federal government, we must always tune into our own communities, and see how we can provide sanctuary there,” she added.

The student letter addresses the larger impact that the Trump administration has had on the civil rights of the LGBTQ community, including transgender, gender-nonconforming (GNC), intersex and queer individuals. The administration has provisionally or permanently repealed a series of Obama-era LGBTQ-related legislation.

In the leaked memo, it was revealed that the Department of Health and Human Services plans to establish a strict definition of gender under Title IX, the federal civil rights law that protects against gender-based discrimination in education programs that receive financial assistance from the government. It would insist that a person’s gender assigned at birth is their legal and unchangeable gender, regardless of any measures the person might take to live as their preferred sex.

United Student Government (USG) President Demetrios Stratis, FCLC ’19, acknowledged the points made in the published student document. “There has been headway and good progress made on campus with the implementation of all gender restrooms, but it must still be recognized that this is a first step,” he said.

“This is the case because the issue has never been about the bathrooms themselves but the existence of trans students,” Stratis added. “Many current campus policies, including most prominently, the housing policy has not been conducive to creating a welcoming and inclusive environment for a marginalized student population, policies that have been shown to be harmful.”

Many student activists instrumental in drafting the letter vocalized their fears for transgender, GNC, intersex and queer communities on campus. SAGES and The Positive Coalition member Maggie Ball, FCLC ’19, explained, “While this memo is scary and anxiety-inducing, and, for some, life threatening, it is also not new — the acknowledgement of trans and queer existence has been undermined by the state time and time again.”

Ball went on to explain the fundamentals of the issue: “But as much as they’d like to undermine us, trans and queer people haven’t stopped existing and we don’t plan to any time soon. Not to be corny, but affirmations of existence don’t ever come from a distant governmental memo anyway. They come from community and they come from ourselves.”

Rainbow Alliance President Jack Bugbee agreed. “Trans, gender non-conforming and intersex students have not been respected nor treated properly at Fordham for too long, he said. “There are transphobic housing policies in place, there is no university-wide chosen name and pronouns policy in place, and the legal definitions proposed by the Trump administration would only serve to worsen these policies as they directly affect Title IX.

“We also want to emphasize that we want trans, gender non-conforming, and intersex students to know that we recognize your existence, we respect you and we love you,” Bugbee added. “We want you to feel safe in our community, and we are working towards policy changes to ensure your safety and ensure the preservation of your dignity.”

Reflecting upon the implications of the Fordham letter, Putnam expressed hope that it stirs more than just casual conversation. “I believe that the students, faculty and administrators I work with want our community to be one in which everyone can access their education, and all this university has to offer, without facing discrimination,” she said. “I believe that we want everyone to be safe in the Fordham community. So, we must fight the violence our institution is causing in its housing policies, and the harm individuals cause by misgendering and deadnaming our peers.”

The letter also mentions that there will be a rally for transgender rights on Wednesday, Oct. 31. It is to be held at 5:15 p.m. at the Lincoln Center Plaza.

Stratis concluded: “In light of current acts proposed by the Trump administration, acts that in effect, deny the existence of trans people, we must remember that the Fordham student community espouses and must continue to engender care and respect for all, especially our marginalized classmates. We care for our own. Trans students exist and they are our classmates. We must advocate and continue to work on creating a better campus environment to achieve this end, a goal that student leadership must recognize and strive to.”

We, the undersigned student groups at Fordham University, write to publicly oppose the Trump administration’s draft memo proposing denial of transgender existence under Title IX. We stand firmly in support of transgender, gender-nonconforming (GNC), intersex, and queer students at Fordham. We implore students and the administration to resist transphobic rhetoric and take action to change the norms and policies that exclude, erase, or endanger transgender individuals in our community.

On Sunday, the New York Times leaked a Trump administration draft memo proposing the denial of transgender existence under Title IX. The Times reported that the Department of Health and Human Services (HHS) is spearheading an effort to establish a narrow legal definition of sex under Title IX, the federal civil rights law that bans gender discrimination in education programs that receive government financial assistance. HHS intends to define sex as “either male or female, unchangeable, and determined by the genitals that a person is born with,” according The Times. The leaked memo goes so far as to define sex as “the sex listed on a person’s birth certificate, as originally issued,” simultaneously demeaning the existence of transgender individuals, while also painfully overlooking the difficult process that many transgender people go through to change the sex on their birth certificates to reflect their true and present sex.

If the Administration follows through on these proposed changes, it will be its most severe affront to transgender, GNC and intersex rights to date. This change would effectively define out of existence an estimated 1.4 million transgender and GNC individuals, a population already suffering tremendous persecution and discrimination in our country. For transgender women of color, transgender and queer immigrants, and asylum seekers fleeing persecution in their home countries because of their gender identity and sexual orientation, the future is exceptionally bleak.

The Trump administration’s choice to interpret Title IX in this way is a choice based on fear, hatred, and a nearly pathological inability to empathize with a group of people that this administration has chosen to ignore, misunderstand, and make more vulnerable time and time again.

Today, the transgender community is watching their legal existence debated on the national political stage, a uniquely degrading, but all too familiar experience. The queer community has overcome obstacles to our liberation in the past, and we continue to do so now. Although we applaud Fordham University for continuing to protect against discrimination on the basis of gender, gender identity, and gender expression under Title IX, despite the Trump Administration’s rescission of the Obama Administration’s Dear Colleague letter, more can be done.

We now call on President McShane to publicly affirm in a university-wide letter the university’s position that we will not tolerate transphobia within our community or on our campus. We demand that Senior Vice President for Student Affairs Jeffrey Gray and Residential Life Directors Jenifer Campbell and Kimberly Russell change transphobic housing policies immediately. We demand that academic department chairs quickly adopt a chosen name and pronouns policy to be included in all class syllabi, promoting university-wide adoption of the policy.

We recognize the undergraduate transgender students who have been and continue to be forced to leave Fordham because of our dehumanizing and unsafe housing policies. We recognize the transgender students who are misgendered time and time again, by professors, administrators, and students alike. We are pushing back against this invalidation of identity. We recognize the students who fought for years to get gender-inclusive bathroom signage installed, and left Fordham before they saw the university respond to their needs. Those efforts were not in vain; we continue to build on that fearless advocacy legacy to serve current and future Fordham students.

We demand visibility, equal treatment, and respect within the Fordham community. We see the many members of the Fordham community who will read this letter and thank us for writing it. We call on you to stand with us and work with us as we fight for our rights to safety and dignity at our university and in our communities. To our transgender community members at Fordham, we see you and stand with you.