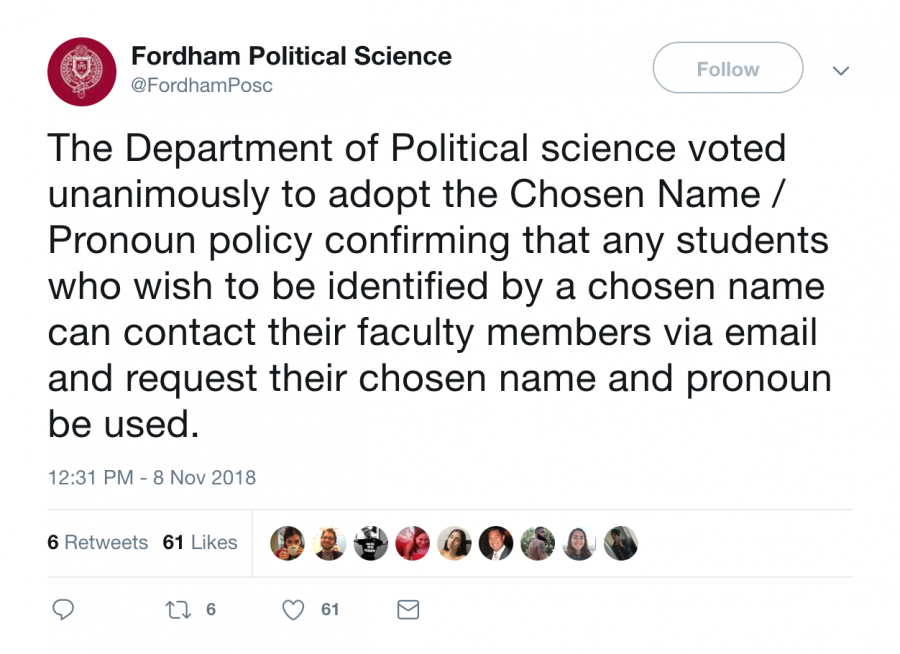 UPDATE (11/15/2018, 1:08 p.m.): The English department voted to adopt the preferred name and pronoun policy on Wednesday, Nov. 14, according to Dr. Jordan Stein, chair of the department. The vote took place immediately following a “persuasive and thoughtful presentation” by Fiona Whalen, a student who has led the charge for academic departments to adopt the policy.

UPDATE (11/15/2018, 2:16 p.m.): The Women, Gender, and Sexuality Studies (WGSS) program voted last week to adopt the policy, according to Prof. Ayala Fader, the co-director of the program. The policy will affect all courses with the WGSS attribute. The WGSS board has also encouraged its affiliated members to consider using similar language in the courses cross-listed with the WGSS program as well as to adopt the new policy in their respective departments.

Fordham University’s departments of Political Science and Modern Languages and Literature (MLL) have voted to adopt a policy allowing students to request that their professors and other faculty members use students’ preferred names and pronouns.

The MLL department’s decision to adopt the new policy came during the spring 2018 semester. The new policy was printed on syllabi and handbooks for classes in the department at the start of the current fall semester, according to Fiona Whalen, Fordham College at Lincoln Center (FCLC) ’19, who has been working closely with the departments to craft the new policy and ensure it is upheld.

The Political Science department is the newest department to adopt the policy. It announced its decision in a tweet on Nov. 8. The vote was unanimous.

The Department of Political science voted unanimously to adopt the Chosen Name / Pronoun policy confirming that any students who wish to be identified by a chosen name can contact their faculty members via email and request their chosen name and pronoun be used.

For the Political Science department, the changes come just over a week after the Positive Coalition, Rainbow Alliance, Students for Sex and Gender Equality and Safety (SAGES), and several other student organizations organized a rally in support of transgender rights on campus. The groups also penned an open letter the week before demanding that Fordham extend greater support to members of the transgender community.

Whalen, a member of SAGES and a co-founder of the Positive Coalition, has been working on the development of the new policy for two semesters now. Last spring, they and Eliza Putnam, FCLC ’19, another leading member of SAGES, held meetings with the MLL department to discuss potential future implementation of a policy that would allow transgender and gender-nonconforming students to request that faculty members use their preferred names and pronouns.

“It’s important why they understand it,” Whalen said, speaking about professors in the departments that have adopted or will adopt the policy. “Not only that they follow it.” Whalen added that they “want to be a part of that education,” and that the professors involved have largely been receptive and understanding.

Whalen hopes the policy will soon be adopted across the university, but they conceded that change like this happens in “baby steps.” For now, the MLL and Political Science departments are the only two that have adopted the policy, which is effective on both campuses for each department. Whalen is also working with the English, Latin American and Latino Studies, and Women, Gender, and Sexuality Studies departments to begin discussions on the subject.

The English department has already engaged in early discussions, according to Dr. Jordan Stein, chair of the department, but the stages are still preliminary. “A vote has not been proposed,” he said, “though we are discussing it at a department meeting.” That meeting will take place next Wednesday, Nov. 14.

Speaking on the two departments that have enacted the policy thus far, Whalen said, “In my head right now, I’m looking at a score sheet, and I have two marks on it. But I don’t want two notches in there. I want that s— filled up.” They added that, ultimately, the policy is about “recognition that trans people exist, not only at Fordham, but everywhere,” and that they are “really excited” about the forward movement on this issue.

“We’re all trying to find creative ways to celebrate all genders in the classroom,” they said. “To make sure everyone is seen and everyone is supported.”