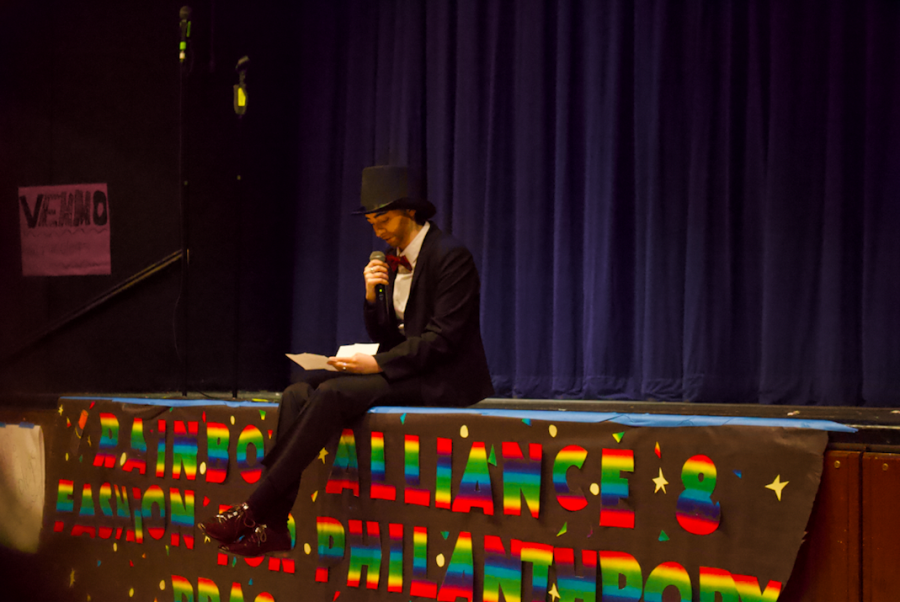 Drag King “Just Kyle” reads a letter written by the Rainbow Alliance e-board addressing the issues around drag, including transphobia.

“Fordham did not know what they were getting into when they accepted my application,” Rosie “Ram This” Hill said.

It’s unlikely that Fordham could have foreseen him hosting the university’s first ever drag show after they admitted Jack Bugbee, Fordham College at Lincoln Center (FCLC) ’19, president of  Rainbow Alliance and queen Rosie “Ram This” Hill. Nevertheless, in Bugbee’s final fall semester, Fordham celebrated this student-run event, providing a space for its students to be totally and wholeheartedly themselves.

On Oct. 19, the show came to life. Wigs flew, death drops ignited cheers from the audience and five-inch pumps smashed gender norms with each queen and king’s effortless strut. Pope Auditorium had a full house: students, administrators and friends alike came out to share the love, to support their LGBTQ brothers and sisters and to celebrate the art of drag.

Drag, in its most mainstream form, features cisgender men (typically those in the LGBTQ community) who dress to exaggerate femininity, playing into stereotypical female gender roles. It isn’t limited to a specific gender identity or sexual orientation, however.

As noted by drag historian Joe E. Jeffreys, “Drag is everybody’s art form.” The art has transcended the gender binaries it questions and critiques. Drag includes queens, kings, bio-queens (which is when a cisgender woman impersonates a drag queen), androgyny and more.

Furthermore, drag isn’t just about the clothes, makeup and wigs— it’s a performance art. Drag combines fashion, comedy and entertainment to create an artform that celebrates individuality and authenticity. It’s a form of self-expression and freedom for a community too often oppressed for who they love and who they are. Originating from 17th century pantomime and vaudeville, drag found its home within the LGBTQ community in the mid-1900s, and has been an important aspect of its history ever since.

Rainbow Alliance and Fashion for Philanthropy brought Fordham’s first ever drag show to life under the leadership of Bugbee and Nicole Shapiro, FCLC ’19. These two clubs came together to celebrate LGBTQ History Month, drag culture, queer culture and to give back to the LGBTQ community. More than $500 in donations were collected during the show and sent to the LGBT Community Center of NY.

Bugbee and Shapiro first connected via shared French classes. Once they were presidents of their respective clubs, they saw an opportunity to work together to create something new and unique. So Rainbow Alliance and Fashion for Philanthropy joined forces and embraced the intersectionality of LGBTQ history, fashion, entertainment and philanthropy. Out of this bond, the drag show bloomed.

Despite Fordham University’s Catholic background, the event was approved just like any other, according to Shapiro. “The Fordham administration understands that the LGBTQ movement is present and necessary,” she said. “Many students identify with this community and it’s an amazing to see a considerably conservative institution acknowledge and empower them.”

Bugbee hopes that the drag show inspired students to “engage in difficult, nuanced and complicated discussion about how drag affects perceptions of queer people and perceptions of gender.” He and Shapiro built an event that not only entertained, but fostered love, compassion and conversation.

At the show, I felt this love. As I picked up my “Gaybill,” I couldn’t help but smile. I knew that in this space, I was accepted for who I was. I knew that who I love would not be condemned here. I knew that this was my family, my lovely, gay family, all here empowering and celebrating one another. There was not a square inch of Pope Auditorium that did not contain endless amounts of life and color.

The audience and performers felt this love as well. Roxanne Cubero, FCLC ’22, said she “felt [it] in her chest.” Queen Lia Anna Thief, a.k.a. Vincent DeSeno, FCLC ’21, had the entire audience laughing with her brilliantly honest and authentic stand-up comedy; she truly captured the humor in millenial gay culture. As Margeaux, John Beltre FCLC ’18, captivated the audience from start to finish. As the wind blew through Margeaux’s silky champagne skirt, the crowd erupted in cheers. She was more than a drag queen, she was a goddess.

Cristina Pardo, FCLC ’19, enjoyed her time at the drag show. “Everyone was just so hyped to be [there] and that made it ten times better,” she said. The excitement radiated from the audience the entire night; the sold-out theater clung to every word queen Coincoin, Wayne C. Babineaux, FCLC ’20, said. During her performance, Coincoin told the stories of the silenced and sang the unfiltered truth, as she recalled America’s long history of slavery and racism.

Claire Holmes, FCLC ’19, said that she “loved seeing so many younger Fordham students here.” Coming from a very religious and conservative background, Holmes was encouraged by amount of support she saw for the show. The great turnout was reassuring, especially after the petition condemning this drag show by the American Society for the Defense of Tradition, Family and Property (TFP) gained over 13,000 signatures. Despite the hate demonstrated by the group, the Fordham community was resilient and stood united. The love from our fellow LGBTQ students and allies is so much stronger than the hate we face.

Drag king Just Kyle, Ky Hayward, FCLC ’21, relayed Rainbow Alliance’s message of the necessity to acknowledge the presence of all identities within the ever-growing LGBTQ and drag communties. “Gender identity and gender expression are not costumes,” he said.