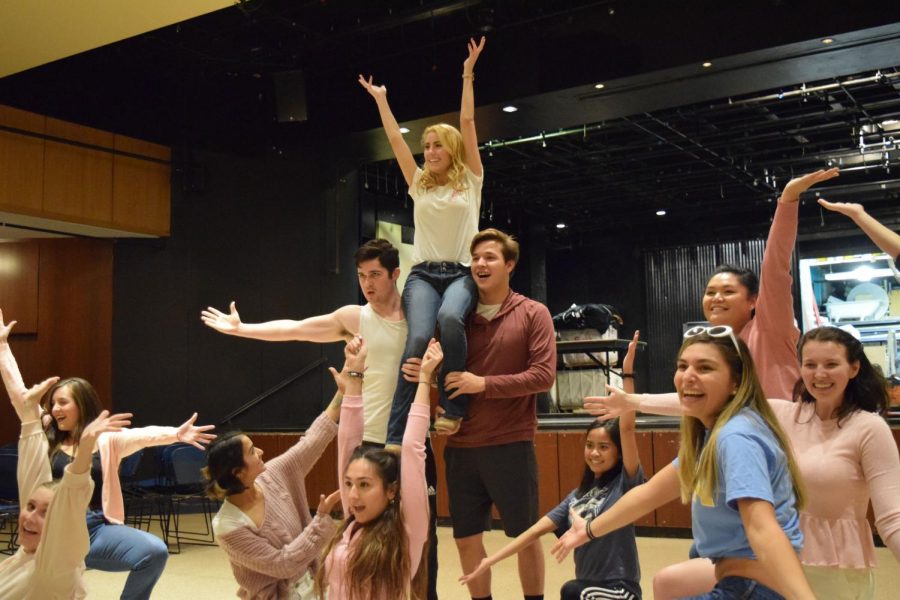 In the number “What You Want”, Elle Woods (Sam Rizzo, FCLC ’22) is admitted into Harvard Law.

On Thursday, Oct. 18, Fordham Lincoln Center’s musical theatre troupe, Splinter Group, presented “Legally Blonde: The Musical.” With a line wrapping the hallways down to the library, a packed Pope Auditorium was uproariously enthusiastic from the show’s start to its conclusion.

“Legally Blonde: The Musical” is based on the Amanda Brown novel and Metro-Goldwyn-Mayer motion picture of the same name. Elle Woods, a UCLA sorority president, enrolls at Harvard Law School in an effort to win over her ex-boyfriend. Over the course of the story, she defies expectations and negative initial impressions others have of her, all while remaining true to herself. It has been lauded critically for its upbeat soundtrack, overall feminist sentiment and strength in confident womanhood.

Indeed, it was a night of female empowerment. Students not only enjoyed a high-energy musical, but also participated in a meaningful cause. For the second semester in a row, the Splinter Group teamed up with Feminist Alliance in a menstrual product drive.

The drive accepted any and all period product donations upon entry for the Bowery Mission. For those out of the loop, the Bowery Mission is a rescue shelter downtown at 227 Bowery St. between Rivington St. and Stanton St. They serve the immediate needs of the impoverished, including meals, shelter and other care.

Feminist Alliance President and Splinter Group cast member Maya Tatikola, Fordham College at Lincoln Center (FCLC) ’20, explained that the drive came to fruition during last semester’s performance of “High School Musical.” “The product drive was created by the Feminist Alliance as a semester-long service project, and uses art and activism to unite the school community,” she said.

Students involved in the production were “Keep[ing] it Positive” leading up to the show’s opening night. Sam Rizzo, FCLC ’22, played the lead role, Elle Woods. “At first I was really surprised, I just wanted [to play] a Delta Nu sister,” said Rizzo, in between compliments and hugs from her peers. “I was really excited to even get a callback … when I checked the cast list, I couldn’t believe it, it was crazy.”

Splinter Group Secretary Jonathan Jackson, FCLC ’20, spoke highly of the show’s casting. “I think going into it the board was genuinely worried about having someone play Elle, but the were so many freshmen this year that showed up and really impressed them,” Jackson said. “I feel like people think that there’s a kind of favoritism, but I think the fact that there are actually a lot of freshmen in the cast proves otherwise. Everyone also brings their own talents and knowledge into the space and the show is better because of it.”

Co-directors Sophia Oliveri-Meyer, FCLC ’20, and Kevin Mikuls, FCLC ’20, both also agreed that it was important to produce the show tactfully in the age of the #MeToo movement. As Mikuls explained, “It’s one of those things where the show is so much fun that people forget that it’s about something, they think it’s just about flashy musical theatre. But at the heart of the story is a woman being able to do whatever she wants.”

The materials within the show were indeed handled maturely and with grace. In the initial show announcements, Mikuls and Oliveri-Meyer were clear about the scenes in Act II that included actions of and discussions on sexual assault. The duo reiterated to the house that the material for some may have been upsetting, and if at any point the presentation was too triggering for audience members they were free to excuse themselves.

“When I really realized the gravity of some darker moments in the show was when during rehearsals there was someone in the cast who felt triggered by the scene,” said Mikuls. “Even though it’s a musical, we felt we had to warn the audience … I’m not sure if anyone even left, but I think we owe it to survivors to be able to choose for themselves how to handle the trauma.”

Oliveri-Meyer added: “We obviously wanted to warn people and took the scene in the script very seriously, because it’s obviously a much more talked-about issue now. We were careful about the blocking and making it powerful, but also making sure that it wasn’t really triggering.”

Leading up to the performance, Jackson was eager for audiences to see the show. “This entire process has been extremely fun to be a part of. This group of people is one of the most fun groups I’ve had the pleasure of working with. Whenever we’re not working, we’re laughing and joking around.”

When asked to comment on the menstrual product drive, Mikuls said, “It’s a good show to have tied with the Feminist Alliance. There’s not a lot of shows where the lead … realizes that she needs to do what she wants, which makes the alliance so special and cool.”

Although the original movie came out in 2001, and the musical in 2007, the lessons Elle Woods teaches audiences have clearly aged well. And in the partnership with the Feminist Alliance’s menstrual product drive, “Legally Blonde: The Musical” solidified its importance among young women still in 2018.