The Subways Are Testing Our Patience 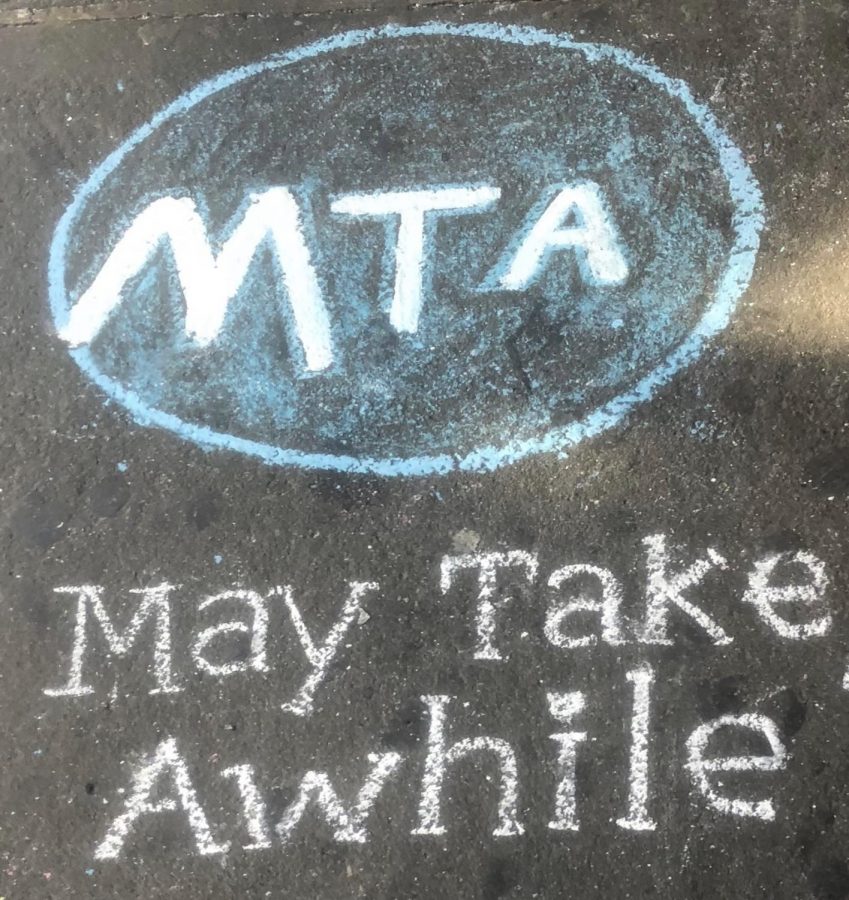 This may be a chalk illustration, but the disrepair of the New York City subway system is not child's play. (COURTESY OF ZAYDA BLEECKER-ADAMS)

They say that $2.75 can get you anywhere in the city. While that may be possible in a perfect world, it isn’t true in ours. Every weekday, 5.7 million people take a leap of faith and dive underground to one of the 472 subway stations across the five boroughs of New York City. Yet for all the use of the largest transit system in the world, the stations continue to look abandoned and dreary.

When trains finally do reach these sorry excuses for stations, they make it there on schedule just 58.1 percent of the time. From the trains to the station to the actual infrastructure, the underground world of New York City isn’t a relief from the traffic above; it’s just another headache.

The subway being a mess isn’t a new problem. Metropolitan Transit Authority (MTA) issues plagued commuters in 1990, when overcrowding started to become an issue on many of the subway lines. Because of the increasing amount of trains running to accommodate, traffic became commonplace on the rails.

These trains are relying on signals so old that command operations overseeing the entire system can’t even pinpoint where exactly a train is located. This uncertainty affects important lines such as the B, D and F lines and poses a major threat to safety — trains are susceptible to collision, endangering lives and commutes alike. The trains themselves are old, with some of the cars operating on the A and C lines reminiscent of the ones seen in the popular 1979 street gang movie “The Warriors.”

I have encountered these problems as a lifelong New Yorker and current commuting student. Just a few weeks ago, after leaving my house at 6:45 in the morning, I was stuck on the northbound D train on the Manhattan Bridge for over 45 minutes, which caused me to be over half an hour late to my 8:30 a.m. class. The best answer I heard as to why we were stuck came over the muffled intercom system, during which the conductor said there were signal problems a few stations ahead. Perhaps the fires for the smoke signals were not burning hot enough, or the string between the tin cans on either end of the tunnel had been severed.

The MTA loves to flaunt its shiny new stations, like the brand new one at Cortlandt Street-WTC, yet it continues to ignore decaying high-volume stations such as 34th Street and West 4th Street. On the R line, two stations of the 16 in all of Brooklyn were renovated over the past two years. The rest were left to rot.

There is no one to blame but Mayor Bill de Blasio and Governor Andrew Cuomo. Decades of upkeep on par with that of a cheap roadside motel — allowed by elected officials — has caused the current transportation catastrophe that millions of New Yorkers deal with daily.

More recently, de Blasio and Cuomo have gone back and forth over who has the ability and responsibility to control some of New York City’s most important departments such as the MTA and public housing, another neglected city program. Together, the two don’t even know who’s paying the $30 billion for the repairs that need to be made.

Mayor de Blasio said in August, “There is no way on God’s green earth the city of New York can pay a substantial amount of the MTA’s more than $30 billion subway repair plan.” Cuomo, who gave the MTA $8.6 billion, might as well have taken that money from thin air, as a report from the state comptroller’s office doesn’t indicate where these billions of dollars are coming from. The state has until the middle of the next decade to figure out how it is going to get the funds, which means work on the repairs will not start for a long time.

Many politicians, including former Democratic gubernatorial primary candidate Cynthia Nixon, have made and continue to make the MTA a primary target of potential reform. Incumbent State Senator Marty Golden (R-22), who is running for re-election, has made it his business to aggressively address the underperformance of the subway in his district, which has few subway options for commuters. He said to Street Blogs last week: “While the Governor made the opening of the three stations [in Manhattan] a major event, the reality is that the system is crumbling. The R line, which serves this district, is consistently rated as one of the poorest performing lines.” Golden continued, “The poor state of our transit system undermines our economy. Companies will not remain in New York City if the mass transit system continues to decline.”

Despite support from local politicians on both sides of the aisle, New Yorkers have seen the consequences of poor leadership manifest in their daily commute. In nine years, MetroCard prices have gone up 75 cents and bridge tolls remain obscenely high; one crossing over the Verrazano Bridge to Staten Island costs a non EZ-Pass and non-Staten Island resident driver $17. MTA Chairman Joe Lhota also said in a NY Daily News report that there is no scenario in which fares would remain the same next year. This means New Yorkers of all wealth brackets will continually have to pay more for late trains; smelly, dirty and unkept stations; and old trains in order to get to work.

Everyone involved with the MTA — including Mayor de Blasio, Governor Cuomo, MTA President Andy Byford and Chairman Joe Lhota — should be ashamed of themselves for allowing this horror of the tunnels to fester beneath our great city. They could hold as many town halls as they want, but by the end of it, commuters once again pay the price for their indifference. If they really cared, the subway wouldn’t be like this. New Yorkers like to complain, but even we have our limits. This is an embarrassment.