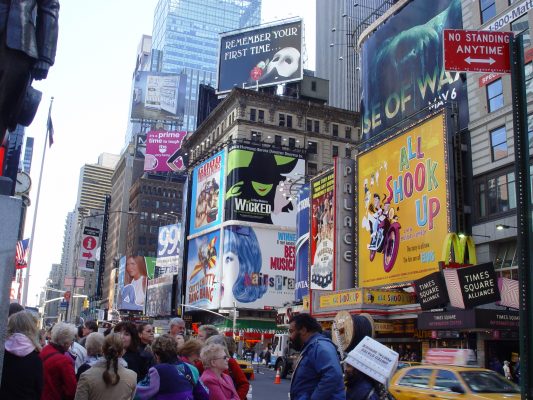 Many suprising new shows are headed to the Broadway stage like "King Kong" and "The Cher Show" (Courtesy of Martin Dürrschnabel via WikimediaCommons).

As the leaves fall in the parks, the curtains rise on new openings aplenty on the Great White Way. The 2018-2019 Broadway season is in full swing and has offerings of all genres. From a newsroom dramedy to a high school musical to a headliner featuring a well-known gorilla, this season’s upcoming shows put familiar people, characters and places in a new (spot)light, if you will. To name a few…

“The Lifespan of a Fact”

Now in the Muggle world and lacking Veritaserum, Daniel Radcliffe must discover the truth for himself as a magazine fact-checker in this new play. His editor (Cherry Jones) assigns him to check a startling piece by John D’Agata (Bobby Cannavale) about the suicide of a Las Vegas teenager. When he discovers that most of the piece is falsified, trouble and comedy ensue. The show and characters are based on real people of the same names and a controversial article that sparked years of debate about how much fiction belongs in nonfiction. The show began previews at Studio 54 on Sept. 20, will officially open Oct. 18 and run until Jan. 13.

If the aforementioned well-known gorilla brought Harambe to mind, you’d be wrong. The other famous ape is getting his own musical. The now-classic tale of Ann Darrow and Carl Denham’s voyage to a mysterious island and the resultant chaos will officially open at the Broadway Theatre Nov. 8. Previews began Oct. 5. Alongside Christiani Pitts (Darrow) and Eric William Morris (Denham), the King himself will be portrayed by an “animatronic puppet” that stands six meters tall, according to Playbill. I’m just imagining Darrow singing a climactic ballad to that thing as it climbs the Empire State Building. This show runs in the “Cursed Child” vein in that, even if it sounds ridiculous or the premise doesn’t interest you, you might go to satisfy the burning question, “How the heck are they going to pull this off?”

Show of hands, who’s watched “High School Musical” a few more times in their adult life than they’d care to admit? No judgment; I’m with you. If you’re nostalgic for those song and dance breaks in hallways and classrooms, “The Prom” should deliver. The musical follows a high school girl who wants to take her girlfriend to prom and is barred from the event as a result. Word of the incident reaches a group of Broadway performers, who travel to her Indiana town to help. The show will begin previews at the Cort Theatre Oct. 23 and officially open Nov. 15 for those of us who’ve wished the original HSM was a little more LGBTQ-friendly. The ensemble includes Fordham’s own Wayne “Juice” Mackins, Fordham College at Lincoln Center ’19, who played the title role in the theatre department’s mainstage production of “Macbeth” last spring.

This show is for those seeking something more somber and serious in tone. Elaine May stars as Gladys, an art dealer who struggling with her diagnosis of Alzheimer’s Disease. Michael Cera, fresh off a run in “Lobby Hero,” Lucas Hedges of “Manchester by the Sea” and Joan Allen complete the cast as family members who must cope with Gladys’s declining health. Previews are underway, and the play will officially open Oct. 25.

It’s unclear if anything in particular will distinguish this show from the ever-growing string of biographic jukebox musicals as of late; it really is hard to keep count nowadays. Considering its subject, though, it’s guaranteed to be flashy, energetic and larger-than-life. Cher can’t even be limited to one actress — Micaela Diamond, Teal Wicks and Stephanie J. Block will perform as the star in different stages of her life and career. The show is set to open at the Neil Simon Theatre Dec. 3, and previews will begin Nov. 1. “I’ve Got You Babe” got stuck in my head just thinking about it.

For more information on affordable tickets to all these upcoming shows, check out A Beginner’s Guide to Broadway on a Budget.