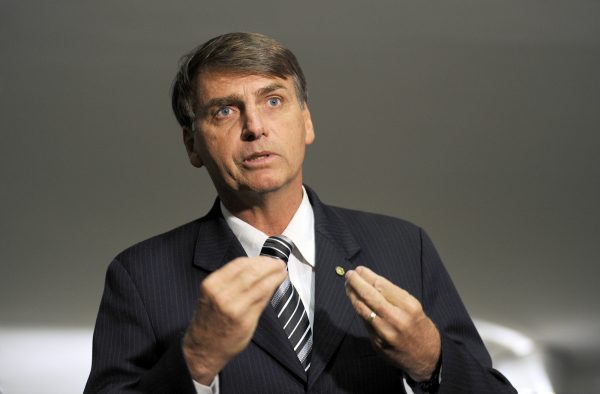 Bolsonaro promises an end to crime in Brazil, and Brazilians may be ready to welcome it by any means necessary (JANINE MORAES/CHAMBER OF DEPUTIES OF BRAZIL VIA WIKIMEDIA COMMONS)

There are two elections that will be of massive global significance in 2018 and beyond. The first are the U.S. midterm elections on Nov. 6, 2018. The second is Brazil’s presidential election. The latter’s intensely polarizing campaign has raised concerns about the future of the country’s relatively young democracy that sprouted from the collapse of a military dictatorship in 1985. The frontrunner, after all, is an extremely right-leaning candidate threatening to nudge Brazilians back into a time in their history they might rather forget. On Oct. 7, 2018, Jair Bolsonaro received 46 percent of the vote. He will now face off in a runoff election scheduled for Oct. 28 against Fernando Haddad, a center-left establishment candidate from the Workers’ Party. Given that Bolsonaro’s margin of victory was over 16 points above Haddad’s, there is a troubling possibility that he could win the runoff.

The Brazilian electorate is becoming increasingly enraged with routine political corruption, currency inflation and rising crime (64,000 murders last year). To his supporters, Bolsonaro represents the answer to such social ills.

Despite his fringe views, he produces simplistic answers to serious and often deadly problems. His “law-and-order” rhetoric goes as far as defending the country’s former military dictatorship as well as often appalling rhetoric on other topics such as LGBTQ issues. His campaign even calls for sterilization of the poor to prevent crime as well as arming private citizens so they can personally take on criminals, which other candidates in the race have dismissed as ludicrous. This enrages his political opponents, yet his likely voters give such cavalier rhetoric a thumbs-up because they believe more authoritarian tactics could actually drive down crime.

Bolsonaro stirred enormous controversy by saying what sounds more like a line from “The Purge” than real life: “We’ve got to let everyone have guns, just like in the United States. I’d let truck drivers and security guards have guns, for example. It’s like the Wild West out here, but only one side is allowed to shoot.”

With his divisive style and general lack of detail to his campaign platform, Bolsonaro is considered by some to be the Latin American version of Donald Trump. Yet he has several very stark differences from the current U.S. president. In contrast with Trump, who was a political neophyte before the 2016 U.S. presidential election, Bolsonaro is a seasoned politician who has groomed his sons as well as himself to stand as prominent political figures in Brazil. He knows just how far he can go in shocking the population without losing his own base, and he is aware that pie-in-the-sky solutions to serious problems in Brazilian society are what many voters want to hear. Unlike Trump’s mostly working-class and less educated voter base, Bolsonaro’s tends to be wealthy and highly educated.

It is true, however, that Bolsonaro and Trump have clearly turned polarization into a successful political weapon in their home countries. Even if Bolsonaro loses the runoff election, much of the damage to Brazil’s social fabric will have already been done.

In early September of 2018, Bolsonaro was stabbed in the intestine in broad daylight while on the campaign trail. He allegedly lost 40 percent of the blood in his body, and spent the following weekend recovering in the hospital. Authorities confirmed the suspect to be a 40-year-old, left-wing activist known for their heated opposition to Bolsonaro and his policies. All major politicians in Brazil condemned the attack. Even Bolasonaro’s staunchest critics were appalled that a near-murder could occur during a political campaign for the top office in their home country.

While Bolsonaro’s rhetoric is often reprehensible and incredibly disturbing to those who care deeply about the preservation of democratic institutions, the fact that a presidential candidate could be targeted in a politically motivated stabbing serves as yet another ten-alarm fire for the fragility of Latin America’s largest democracy. Since the stabbing, Bolsonaro has climbed in the polls, his campaign exploiting his stabbing as ground zero for an aggressive, far-right agenda against out-of-control violence that dogs Brazilian life.

Regardless of whether Bolsonaro wins or loses, Brazil’s position on the world stage is an issue with major global implications. Many corporations and investors would rather invest in a country they perceive as stable and safe (yet still not too expensive to conduct business in). Regional examples of this include Chile and, increasingly, Colombia. Brazil’s economy is, after all, in need of heightened development to counter stagnant wages and high poverty rates.

Yet the country still has much to offer to the world, both financially and culturally. We can only hope the people of Brazil will find their way out of this messy situation, but even if the country dodges the bullet of Bolsonaro this fall, it will not be easy to chart a path forward.