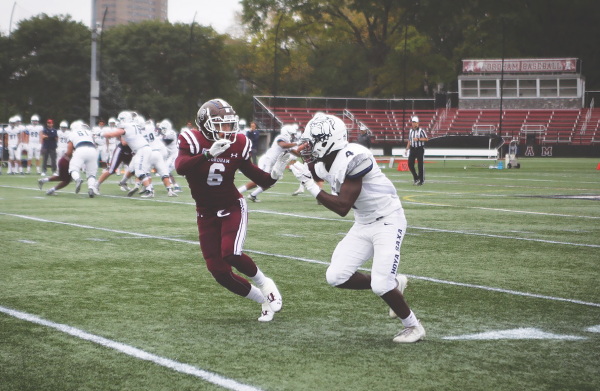 One of the most puzzling, and certainly one of the most consequential coaching decisions in Fordham’s 23-11 loss to Georgetown Saturday afternoon came late in the fourth quarter. Freshman quarterback, Tim DeMorat, in his second career start, had just thrown an interception, but otherwise was playing competently. Nevertheless, head coach Joe Conlin decided to bench DeMorat in favor of senior Luke Medlock.

Medlock’s first pass went incomplete; his second was intercepted and nearly returned for a touchdown. One play later, Georgetown found the end zone, and the game was put decidedly out of Fordham’s reach.

“We just wanted to give Luke a chance,” Conlin said after the game, “and see if he could change something up.”

Medlock was benched two weeks prior due to poor play. Unlike Medlock, DeMorat had, for the most part, kept both of the games he started competitive. After Medlock’s interception, DeMorat returned to the game with just over two minutes left to play. He was sacked three consecutive times, the third resulting in a safety. Fordham had to kick the ball away, and Georgetown kneeled until time expired.

It was one of the Rams’ worst offensive series of the season, and highlighted one of their biggest weaknesses — a struggling, inexperienced offensive line.

The disastrous end to the game left Conlin’s 0-5 team with far more questions than answers. “What could we have done dating back to fall camp differently?” he said. “You look at the whole game-planning process … Any time you lose, you better look at everything.”

Everything, for Conlin, includes his own coaching decisions and abilities. Poor play calling, including a failed fourth down conversion late in the fourth quarter, undoubtedly contributed to the loss as much as or more than players failing to execute on the field. “I told the team that this loss is on me,” Conlin said. “I have to get better and learn as a head coach.”

“It seems to be a common theme,” he continued, recalling the countless chances the Rams had two weeks ago to win the game against Central Connecticut State. “We just put [the offense] in too many difficult situations. We have to do a better job at protecting our quarterback.”

As the midpoint of the season approaches, Fordham is, to put it mildly, in a less-than-ideal position. The Rams haven’t gone 0-5 since 2005, when the team did not win a game until Week 8. They finished that season with a 2-9 record.

If Conlin is looking to avoid the Rams’ first winless year since 1999, changes will have to be implemented quickly. “We’ve got some good football teams coming up,” he said, looking ahead to a schedule that includes a matchup against a 4-1 Bryant team in two weeks.

“It’s not hard to self-evaluate at 0-5,” Conlin said, and he and his team will have to do just that if they hope to salvage their season.