Bringing Yoga to the People 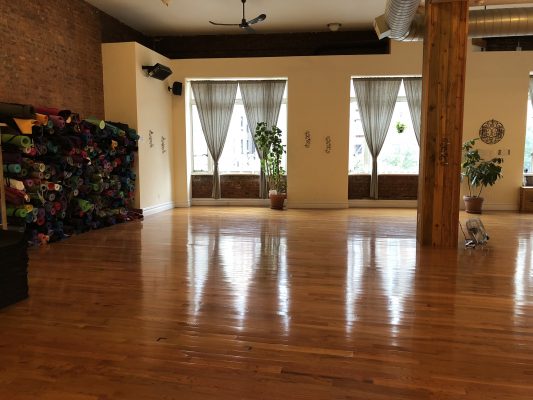 Yoga to the People aims to attract those who may be deterred by the high cost of traditional yoga studios.

In today’s world, everyone could use a little peace of mind. Many individuals, now more than ever, long for the chance to relax, unwind and unplug. Yoga gives people the perfect opportunity to do just that.

Something that turns people away from yoga, however, is the cost. Many yoga classes in New York City are expensive, costing at least $15 per session and even more if one doesn’t own a mat. For students on a budget, yoga classes are simply not feasible.

Even so, those who feel passionately about yoga want to continue sharing this powerful practice with the world. Individuals are working toward easing the monetary burden so yoga can be more accessible for all.

In 2006, Greg Gumucio, founder of Yoga to the People, had this exact thought in mind. His establishment has since expanded to nine different locations, six of which are in New York City. As listed on the company’s web page, all of the studios share one common goal: “Yoga made available to everyone.”

Holding true to their mission, multiple Yoga to the People locations offer yoga classes, taught in the style of power vinyasa, that have no required fee — relying on donations from students. Power vinyasa classes flow from one posture to the next in an energetic flow, connecting breath with movement.

In addition to regular power yoga, traditional hot yoga and hot vinyasa yoga are offered at most Yoga to the People locations. Hot yoga classes consist of two breathing exercises and several postures in a heated room of 105 degrees Fahrenheit, which allows people to sweat out their negative endorphins. These classes cost $8 each, still considerably cheaper than what a typical hot yoga class costs, which is usually around $20.

The cost is not always what pushes yoga-skeptics away, though. Some fear that they are not physically equipped to be a yogi: they claim that they are too inflexible, too old, too weak or have too many injuries.

Yoga to the People demonstrates the true universality of yoga and welcomes everyone, despite the physical concerns that some may feel that they have. Tasha, a power vinyasa yoga instructor at the Upper West Side location, finds that the freedom encouraged in class is what makes Yoga to the People such a rewarding space to practice in. “The beauty of the practice is there are no expectations,” she said.

Upon walking into the yoga space on the Upper West Side, visitors are welcomed by the instructor and calm, peaceful music. People can place their belongings in a cubby, rent a mat and choose any open spot in the room. Some might like a spot next to the big windows or perhaps the fresh green plants. Others sit next to friends and quietly mingle before class begins.

Taking class at Yoga to the People is different from other studios because the focus is completely on, as per the name of the establishment, the people. The teacher walks around giving instructions, but does not judge or correct anyone’s movements. Throughout the class, individuals are given the opportunity to do some of the flows at their own pace, to their own breath. The sense of unity typical of the yoga practice remains, however, as the class lets out relieving “Ha” or “Ohm” sounds together throughout the flow. Many yoga students, new or well-practiced, come out of class feeling more calm, happy and grateful for both the gift of yoga and the world around them.

Everyone has their own daily struggles and yoga can help to deal with these challenges in a healthy way. Yoga shines in its benefits for the mind, body and soul. It not only helps people become more physically and mentally flexible, but it also helps them let go of that which they cannot control. In becoming more present, one learns to become more mindful with both themselves and with others.

Because yoga is a constant journey, it is often referred to as a “practice.” There is no perfect posture or perfect state in yoga. Some days are easier than others, but yoga challenges people to keep trying and to keep coming back to their mats. By learning to control their breath and relax their mind and get rid of the negativity in their lives, people can grow as a yogi both on and off the mat.

Tasha believes everyone should try yoga to “connect with their inner self and imagination.” She described the child and dance-like quality of the practice that allows one to free both their body and their mind in the 60 minutes that they are on the mat.

“The more you practice yoga, the more life gets a little easier. Routine difficulties can get easier because you find an inner calm you retract yourself day-to-day,” Tasha said. “This is not just a physical practice,” she continued. She explained how the practice helps her focus with the world around her.

No matter who you are or where you come from, yoga studios are there for Fordham students to go and partake in a rewarding experience. Everyone deserves the opportunity to de-stress and let go, especially after midterms. Though Fordham Lincoln Center is fortunate to have a Yoga and Mindfulness Club on campus, Yoga to the People locations are open every day for those who just cannot wait for that weekly meeting. It is important, for college students especially, to keep both mental and physical health in check. So take a break from your studies, roll out a mat and channel your inner zen.