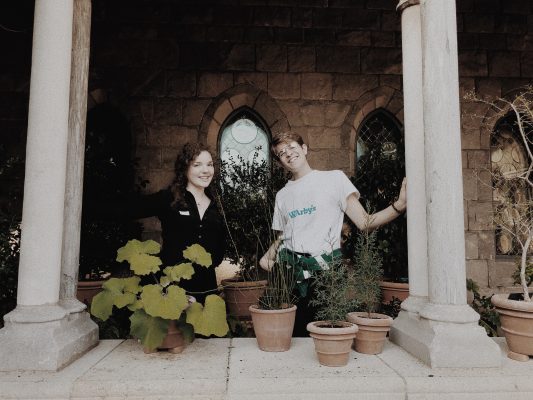 Not every university can claim to have the number one B.A. theatre program in the nation; Fordham University, however, can. The students in this program are highly driven and talented, resulting in theater that is just as impressive.

At Fordham, the Theatre Program stages eight shows a year open to students, faculty and the general public. Students direct or write each show that is produced. Each student is paired with a mentor, either a professional director or dramaturg, who assists them throughout the show’s production.

Each student made a play proposal and explained why they wanted their play performed.

Many of the student-written plays were written last spring and have been developed since then.

During class, the playwriting students worked on a character-building exercise that pushed some of the writers out of their element. “I started out with a theme and moral,” Kiernan Westrick, Fordham College at Lincoln Center (FCLC) ’21, said about their play “Intelligence.” This is a first for the playwright who usually writes a play with the characters first.

Acting student James Kenna, FCLC ’19, said the entire studio season is “like a laboratory.” It’s an opportunity for theater students to experiment with new and innovative forms. For instance, Jennifer Ogasian, FCLC ’21, wrote a musical about the domestic abuse of multiple women across generations, while Kaylie Groff, FCLC ’20, is directing “The Dybbuk,” a play about a Jewish couple during Sabbath dinner.

For many of the plays written by student playwrights, these shows are works in progress. Alexis Chapin, FCLC ’21, compared the productions to large-scale workshops for the playwrights. The Fordham Theatre Program allows writers the chance to see their shows performed to their fullest capacity, but not necessarily in their final form. Writers are expected to continue the revision process long after the studio season is over.

Two Fordham theatre students described the department as “insular.” As a result of being such a tight-knit and time-consuming program, there isn’t much interaction between non-theatre students and theatre students, they said. “It would be really great to see people from outside of the major come to see some of these shows,” Ashlyn Frank, FCLC ’20, said. “A lot of the time I feel like I go to Fordham Theater instead of Fordham University.”

There are interdisciplinary shows, like Daria Kent’s “Erotophobia,” in which actors receive training from the Ailey School instructors; however, most studio productions aren’t as collaborative. Frank speculates that this could be because of the rigorous schedule the shows demand. Hours of rehearsal isn’t a commitment everyone is cut out for, she said, adding: “It’s scary, I think that’s why a lot of people don’t go for it. But I think more people don’t know about it.”

“It’s so fun. Nothing is a better sensation than working with people and putting something out there that other people watch and take from,” Frank, said of being part of the studio shows. If you’re looking for a free way to spend your night this season, “There’s nothing like the Fordham Studio!”

The plays run intermittently from Oct. 1 to Dec. 5. While the Mainstage shows are $5 for students, the studio shows are entirely free. Tickets are available through email reservations two weeks before the show runs. Each show has a specific ticket email address, which can be found on the show’s posters located around campus.