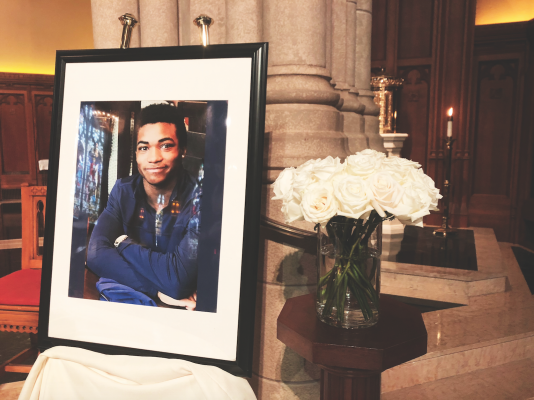 On the afternoon of Oct. 2, members of the Fordham community mourned the loss of 18-year-old Nicholas Booker at the candlelit memorial mass in the University Church at Fordham College at Rose Hill (FCRH).

Nicholas Booker had only spent one month as a freshman at Rose Hill before his tragic death on Sept. 27. He passed away two days after collapsing from a sudden asthmatic attack in the Lombardi Fieldhouse.

“There is nothing good about the death of a bright young man such as Nicholas Booker,” McCarthy said. “We are left with broken hearts and deep feelings of sadness.”

Campus Ministry organized the mass over a week-long planning process for McCarthy and the Director of University Church Ministry Rev. Mark Zittle, O. Carm, which included convening with Booker’s friends. Together, the group sought to develop a process conducive to healing while allowing people to grieve.

“The consensus was that gathering the greater university community in prayer was important,” Zittle said. “We thought a Memorial Mass in Fordham University Church would be an appropriate way to acknowledge Nick’s death, celebrate his life and speak a word of hope to all those grieving.”

McCarthy also shared Booker’s friends’ fondest memories of him. His “infectious” laugh remained his most memorable trait for all of them, in addition to his “short, short, short corduroy shorts” that only “he could get away with.” His friends from Martyrs’ Court told McCarthy they would want Booker to know they all miss him.

In light of the suddenness of Booker’s death, McCarthy reminded the attendants to appreciate and “choose life.”

He said that his family could find consolation in Nick’s ability to help others as an organ donor. “Because of Nick’s clear eyes, those who were blind can see today,” McCarthy stated.

His mother, Tonya Booker, told The Observer “he gave two people the gift of sight.”

Booker’s roommate, Joseph Russo, Gabelli School of Business (GSB) ’22, served as a lector for the service toward the end of the mass. Russo’s reflection “beautifully captured the life and spirit of Nick Booker,” Zittle said.

“Nick’s death is a significant loss not only for the Booker family but also for his close friends here at Fordham,” he continued. Some of Booker’s friends were also gift bearers.

Born in St. Louis, Mo., Booker had only visited New York a few times before committing to Fordham. Russo reminisced over their second weekend in the city, when he and Booker explored downtown and met some friends from New York University. Russo also remembered Booker’s “special potato chips from St. Louis,” that he always enjoyed sharing with his friends.

During his speech at the mass, the university president recalled his time spent with the Booker family at St. Barnabas hospital during Booker’s final hours. “Nick’s grandfather told us in the hospital that he had many options,” McShane said, “but he chose New York and he chose Fordham.”

“Nick was a native of St. Louis, but he was a New Yorker by adoption, so I think it is right for us to give him a proper and a right New York farewell,” concluded McShane as the University Church erupted with thunderous applause.