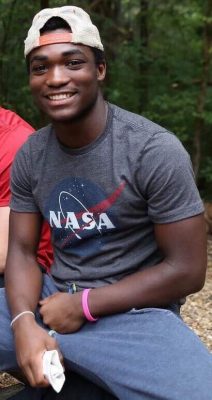 First-year student Nicholas Booker, Fordham College at Rose Hill ’22 has died in St. Barnabas Hospital on Thursday, Sept. 27 after his collapse last Monday night in the Lombardi Fieldhouse, according to a statement from the Office of the President.

Booker was rushed to the hospital’s intensive care unit that Monday after graduate students administered CPR at the scene. Campus Ministry notified his family shortly after, who were flown from St. Louis overnight as Fordham staff stood vigil. His mother remained at his bedside during his final moments, university President Rev. Joseph M. McShane, S.J. reported.

Students were notified of Booker’s hospitalization Tuesday morning. The Office of Campus Ministry organized an evening prayer service at the University Church. The ceremony was a “solemn and profound gathering with and for Nicholas’s friends,” Pauline Villapando, director of Spiritual Retreat Ministries said. Executive Director of Campus Ministry Rev. Jose-Luis Salazar, S.J., led the 80-some students, faculty and staff in prayer and song.

According to Villapando, Salazar spoke to the moment of grief and confusion. “We are people of hope, and we light candles for each other and keep the light burning in our hearts to symbolize the light of faith and our hope in the resurrection,” she said he shared when presiding. “Christ takes us … by the hand that we, too, may rise with Him.”

As a first-year student, Booker had only spent a month away from home at the university. Nevertheless, as a resident in Martyrs’ Court, “he had already become a valued and loved member” of the residential community, McShane continued: “he will be missed by all who were blessed to know him.”

Booker graduated from high school, The John Burroughs School, in 2018, a star student and a football captain, McShane said.

A memorial service is scheduled for Dec. 21 or 22 at the high school, he added; however, for those at Fordham who are unable to travel, a celebration will be held during Memorial Mass this week.

The Observer has not learned of the precise cause of Booker’s death.

Booker’s mother informed The Observer that her son’s organs have been transferred to transplant patients and scientific research via nonprofit LiveOnNY. Booker’s heart, liver, corneas and kidneys have already been given to patients, and his bones, skin, and saphenous veins can help hundreds of other patients. “He gave two people the gift of sight,” Booker’s mother wrote.

McShane relayed the family’s request for mourners to remember their son by donating to the John Burroughs School, the Asthma and Allergy Foundation of American in St. Louis or any charity they choose, “and by giving your children an extra hug.”

“I know that you join me in commending this much-loved member of our community to God’s care and in praying for his family as they mourn the loss of an extraordinary son, brother, grandson and nephew,” he said.

This story was updated on September 28, 12:51 pm to include new information on Booker’s death.