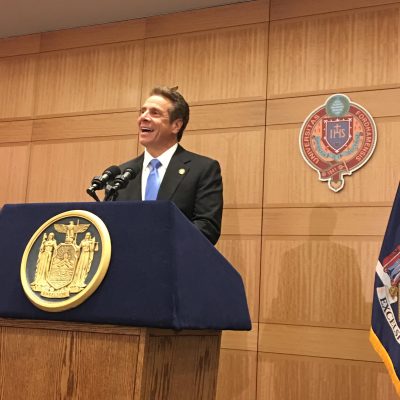 The politicians of Albany are not ignorant, they are complicit. Governor Cuomo has some explaining to do. (Courtesy of Fordham Law)

How is it that the voice of the people so often comes to be silenced?

When we think of widespread voter disenfranchisement, we normally think of it as a problem relegated to the American South, where the legacy of Jim Crow weighs heavily on regulations, producing stringent voter I.D. laws. However, here in New York, the effort to deny the people one of our most fundamental rights as citizens is not just extant — it has metastasized.

Despite its reputation as one of the most progressive states in America, New York’s election laws are as regressive as they come. New York is the only state that has its federal and state primary elections at different times. The latter of those primaries took place on Sept. 13 of this year, on a Thursday — a day not associated with voting that went dangerously unpublicized. As with other weekday voting times, the hours during which polls are open seriously conflict with most daily schedules, forcing citizens to take large portions of the day off from school or work, if they can even afford to do so.

Unfortunately, the institutional barriers to voting don’t stop there. The inconvenient polling times are bad enough, but the lack of any viable alternative only exacerbates the problem. If you know you can’t make it to the polls on Election Day, you’re out of luck on voting entirely, because New York is one of only 13 states in the union without any system of early voting — joining such bastions of voting rights as Mississippi, Alabama and South Carolina. If you’re unable to reach a polling place because you’re out of state at the time, you’re likely doomed as well. Even if you can submit your application on time, New York’s absurdly restrictive absentee ballot service is unlikely to allow you a chance to participate in democracy. There is no automatic or same-day registration either; you must manually register to vote at least a month ahead of the election. But the worst offender is perhaps New York’s closed primary system: you must be registered with the party running the primary in order to vote, but the deadline to change parties for the September primary was 11 months ago, before most candidacies were announced.

This dilemma is only compounded by the legendary incompetence and corruption of New York’s Boards of Elections. During the 2016 elections, the national, nonpartisan Election Protection hotline received more calls from New York than states like Georgia and Texas, recounting thousands of ballot-box snafus. Polling places were moved without warning, hours were reduced in certain counties and voting machines frequently broke down. Most prevalent were errors where registration information was outdated, corrupted, lost or changed without reason or notice. 200,000 voters were wrongfully purged from the rolls that season. Remember the lack of same-day voter or party registration? Hundreds of thousands of voters were told on Election Day that, due to errors on behalf of the state, they would have to re-register in order to vote — and that the deadline to do so was months past.

For a while, it seemed that there was hope. After the 2016 election, the ugly character of this broken system became infamous nationwide. The Justice Department threatened lawsuits; former State Attorney General Eric Schneiderman produced a comprehensive report on the situation and drafted a legislative fix; Gov. Andrew Cuomo toured the state with promises of reform.

It was a lie. The politicians in Albany are not ignorant, they are complicit. The confusing tangle of regulations, restrictions and mistakes is entirely by design. It directly benefits the incumbents and their most reliable voting blocs at the expense of everyone else. The status quo got them elected, often by incredible margins, so our representatives have every incentive to block any sort of reform — and block it they did. As soon as the debacle faded from the public consciousness, the promises of the powerful collapsed like the fictions they always were. The Justice Department’s lawsuits have not progressed. Schneiderman’s bill is rotting in committee with no hearings. Cuomo struck early voting initiatives from the budget. So when it came time for the state primary on Sept. 13, almost nothing had changed.

Yet again, we saw abysmal turnout numbers. Even as political engagement surges in the wake of the 2016 election, three out of four New Yorkers failed to cast a vote. Voter rolls were incomplete and incorrect. Polling places closed early. Misinformation was rampant. Unconscionably, tenants of some New York City Housing Authority developments were even instructed by the Authority itself to stay in their homes for the duration of polling times, so that mandatory inspections could be carried out. The result? An easy win for the establishment, buoyed by the endorsement of major unions and nonprofits they had threatened to defund otherwise. The incumbent Cuomo handily defeated his opponent, actor and activist Cynthia Nixon, and pulled a slate of allies into office on his coattails. Call me cynical, but I wouldn’t expect the victors to make any changes to the system that delivered them victory.

So what is our recourse if we cannot make our voices heard through the ballot box? How can we, as citizens, break the cycle of disenfranchisement when the people in office consolidate power by depriving us of our ability to hold them accountable? We cannot allow these moments of outrage to pass like we did in 2016. Without momentum, without continuing public engagement, we forgot about our grievances and let the politicians in Albany get away with quietly breaking their promise to the people. By hook and by crook, they have stolen our elections, our rightful votes and, most importantly, our voice in government.

It doesn’t have to be this way forever. The solutions to our current crisis are tried and true. Early voting would allow all voters to cast their ballot — not just those who are free on Election Day.  Automatic voter registration would not only ensure any citizen of age would be registered to vote, but also update the voter rolls regularly, obviating the need for the oft-abused voter purges. A ranked-choice election system would eliminate the party primary altogether, in favor of a cheaper single election that is less susceptible to vote splitting. So call your representatives, show up to committee hearings, write letters to the editor and get involved with voting reform organizations like Common Cause New York or Let NY Vote that provide the resources to do so most effectively. If we lend our voices to these causes, if we make ourselves heard and refuse to yield, we can prevent our future elections from again being stolen by the powerful. Perhaps it is too late to keep the November midterms from becoming yet another spectacle of democracy’s downfall, but if we can seize the moment — and seize it we must — we can hold our representatives to their word, ensure real and lasting change is wrought and show that the voice of the people cannot be kept silent for long.