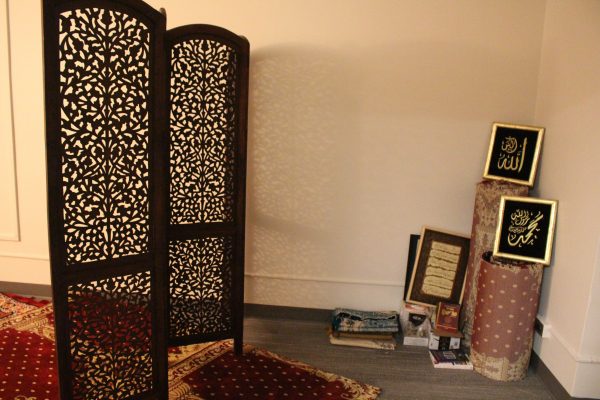 Jummah, a communal prayer for Muslims on Friday afternoons, was held at Fordham Lincoln Center (FLC) for the first time on Friday, Sept. 21. Even though FLC’s Muslim Students Association (MSA) barely advertised the inaugural Jummah prayer, the prayer room was full at 1 p.m. just before the prayers began. MSA Faculty Advisor and Professor of Middle East Studies Mohamed Rahman said, “I’m telling you, two more students, and we were going to have to make them pray outside.” Maryam Shoubir, Fordham College at Lincoln Center (FCLC) ’19 and president of MSA, recalled seeing a row of almost 20 pairs of worshipers’ shoes extending along an entire wall of the room, and almost tripping over them as she, too, took off her shoes and joined the prayer.

MSA is able to host Jummah prayer because on Sept. 6, Campus Ministry redesignated room SL18A as a prayer space. SL18A is on the ground floor of Lowenstein, just past the campus bookstore and IT services office. It hosted the Lincoln Center office of the Dorothy Day Center for Social Justice before the center’s programs were dismantled and partially absorbed by the new Center for Community-Engaged Learning last year. Shoubir said, “I love it,” because in previous years “we couldn’t do that at all, there was no way, just not enough space” to hold Jummah prayer.

When Nevien Shehadeh, FCLC ’20 and vice president of MSA, was a freshman in fall 2016, the only prayer room available to Muslims was Lowenstein (LL) 302A, a small room on the third floor where, she estimated, only three people could pray at a time comfortably. She remembered being discouraged by how small the space was. “Most of the time, people had to wait for each other to pray” in the hallway, Shehadeh said.

LL 302A has been a prayer room since the 2013 – 14 academic year. Before that year, there was no designated space for Muslims to pray on campus, and students would pray in empty classrooms or sometimes behind a curtain in the Rupert Mayer, S.J., Chapel in Lowenstein.

In September 2017, two rooms on the second floor that had previously been used by Global Outreach became available as prayer spaces. According to Shehadeh, rooms LL 219 and 217C were “an improvement, definitely,” because there was more space, but noted that sound sometimes was an issue because Global Outreach was next door.

In early February, female students who generally had taken to praying in 217C were told that the space was no longer available to them. Shoubir explained: “It was overnight, we just found out that we couldn’t use that room anymore.”

Campus Ministry had originally offered LL 217C as a temporary prayer space in an arrangement with MSA’s former President Muhammed Burney, FCLC ’19, and had reclaimed it as an office for Rafael Zapata, Fordham’s new chief diversity officer. Zapata’s primary office is at Rose Hill, though many upper level administrators have offices on both campuses. When Zapata discovered that his new office would take away prayer space from the Muslim community, he decided not to move in.

Muslim students continued using the space to pray unofficially through the end of the academic year, although there was office furniture in the room. In June, Vice President for Mission Integration and Planning Michael McCarthy, S.J., sent a letter to MSA, inviting them to use the room until mid-August. McCarthy said this office designation incident was a miscommunication between Campus Ministry, MSA’s e-board and the Muslim community.

He explained that ultimately, “space is always an issue,” and “that’s a whole sphere I’m not responsible for.” According to McCarthy, decisions on designation of space at Lincoln Center are made by Vice President for Lincoln Center Frank Simio.

The Office of Admissions was unable to provide The Observer with the number of Muslim students at Lincoln Center, or percentage of the student body who is now Muslim. But Shoubir, Shehadeh, Rahman and McCarthy all agree that FLC’s Muslim community has grown in the past two years. Nearly 90 people attended MSA’s Eid celebration on Sept. 13, according to Shoubir, compared to 50 the prior year. She added that many attendees chose to join an optional prayer held in SL18A at 7:30 p.m. during the celebration.

“When we pray together, we feel more spiritual, we feel more connected to God,” Shoubir said. While LL 302A is still available as a prayer space, few students use it because they are unable to pray together. Rahman explained it this way: “Now, if I want to pray, and I pray by myself, that’s a prayer. But if you come and join me, that’s 27 times. By another person coming and joining in prayer with you, that’s 27 times, which is five and a half days of prayer, in one prayer. That’s why it’s very important for us to have a space to pray.”

There are still crucial decisions ahead for SL18A. McCarthy told The Observer in an interview, “We’re going to call it a Multi-faith Prayer Space,” but Shoubir and Shehadeh were both undecided on an appropriate name for the room. Shoubir felt that calling the room Interfaith Prayer Space “kind of avoids the fact that Muslim students want a place to pray,” but immediately added, “we don’t want anyone to not feel welcome, because that’s the whole point of Islam … in Islam, everyone is equal, especially in prayer. No one is higher than anyone.”

Shoubir and Shehadeh both expressed a desire for all members of the Fordham community to feel comfortable using the new space for worship. Shehadeh proposed the name Prayer Room, which she felt would better acknowledge that mostly Muslim students pray there.

Rahman said that some non-Muslim students have used previous prayer spaces for prayer, meditation or quiet reflection. He shared that while many Muslims at Fordham use the prayer room two to three times a day, it meant a lot to him to see that people of other faiths also felt welcome in the room. “At the end of the day, you have the right to be able to pray,” he said. He wanted the prayer room to be for those who don’t have their own space, a category that used to include Muslims at Fordham.

Wall space is also under discussion; MSA has several framed Quranic texts that have hung in past prayer spaces. LL 302A has calligraphy on one wall above the quote, “In the name of Allah, the Most Beneficent, the Most Merciful.” Presently, the frames are on the floor of the new prayer room, leaning against a wall. McCarthy explained that “currently the answer to that is no” to students putting quranic texts on the wall, but added that it’s an ongoing discussion.

One concern is that if Muslim students hang texts and the space is officially designated multi-faith, community members of other faiths could put up their own religious symbols. Most Muslims cannot pray in a room that has any pictures, particularly of animate beings, because it is considered idolatry. McCarthy hoped to continue this conversation, explaining that “because we are a Catholic and Jesuit university, we advocate for diverse religious practices and traditions.” He felt that “a good start is having [a multi-faith] prayer space that is more helpful and acceptable to Muslim students.”

Shehadeh said she was “very proud of what we accomplished” in advocating for a new prayer space, and is looking forward to MSA’s planned programming in the year ahead, in and outside of the prayer room.

Shoubir had a longer-term vision for the future, emphasizing that “we want a prayer room for ten years … We want Muslims who come here in the future to be able to have a prayer space for the entirety of their college life, and to be able to use it regularly or whenever they please.” Shoubir, reflecting on how she has made her closest friends in prayer at Fordham, said: “I feel like we’ve been on this journey of switching prayer rooms together.” She hoped that no one in the future would face the challenges she and her friends worked to address.

A student led the Khutbah for Fordham’s first Jummah prayers, but students hope to bring an Imam to campus in the future. If they do, they will need a separate space for the Jummah prayer, as their prayer room will once again be too small for everyone who wishes to pray together.

The Rupert Mayer, S.J., Chapel may be available, as the room, several times the size of SL18A, is mostly unused and empty during weekdays.