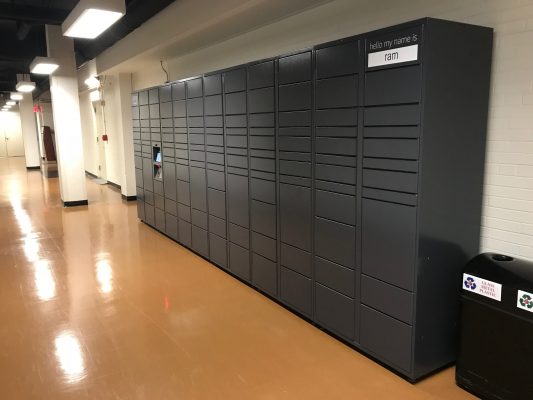 What was once an empty passage in the tunnel between McKeon Hall and the Leon Lowenstein Building now houses new Amazon lockers, replete with easy-access functions that let students skip the overflowing package room. Students at Fordham’s Lincoln Center campus can ship nearly any product available on Amazon directly to the lockers, which are accessible 24 hours a day.

The process of ordering an item from Amazon is quite seamless, Courtney Brogle, Fordham College Lincoln Center (FCLC) ’20, explained. “Instead of choosing home delivery or the address that would get [an item] sent to the package room, you basically choose ‘an Amazon locker near me,’” she said. “When it’s delivered, you’re sent a code to punch in, and it pops open the door. You grab your stuff and you’re good to go.”

The packages are available for pickup for three business days. Afterwards, they will be sent back to Amazon with a refund.

When McKeon Hall was built in addition to McMahon Hall to house more students, the mailroom never got an expansion. As a result, the volume of incoming packages doubled at the Lincoln Center Campus. These Amazon lockers helped to alleviate some of the resulting congestion in the package room.

While shortening the package room waiting time was not the main reason for installing the lockers, Fordham Vice President for Facilities Management Marco Valera noted that “The decision was spurred by the need to provide more options for receiving Amazon packages outside of the normal hours of the post offices on campus.”

“Over the years, we have seen an ever increasing number of Amazon packages being delivered to our students,” he continued. “When this option became available in New York City, we just thought it would be a good compliment to our normal post office hours.”

The use of Amazon lockers has become a growing phenomenon on college campuses. In addition to the Lincoln Center campus, Fordham Rose Hill, Columbia University and New York University use them, as well. Although he doesn’t foresee any new lockers coming to campus soon, Mr. Valera explained that the facilities department will continue to consult with Amazon. “At this time, we do not plan on new lockers, but will work with Amazon to review the use of the newly installed lockers.”

One additional benefit of the lockers, Valera explained, is that they were free to Fordham; Amazon covered the cost of installation. As a final nod to the lockers’ place as the newest characters on campus, they even came with an honorary Fordham nametag: “Hello, my name is RAM.”