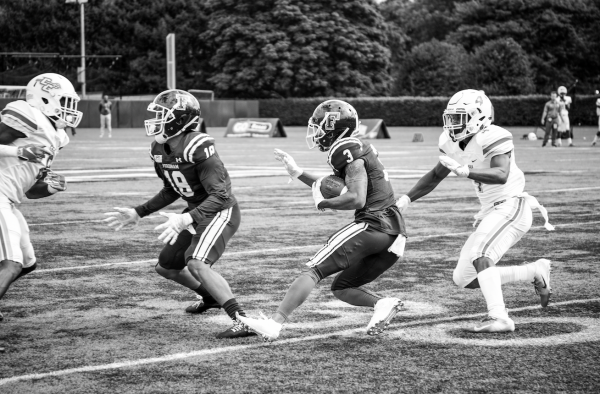 Unfortunately, the Connecticut defense kept DeMorat out of rhythm for most of the afternoon, and the Rams dropped to 0-4 on the season.

Conlin made the decision to start DeMorat under center this week after senior Luke Medlock threw just one touchdown to six interceptions over the last three games. DeMorat showed promise in his first career start, including an impressive ability to extend plays with his legs, but he ultimately fell short in leading the Rams to their first win of the season.

“Luke [Medlock] was put in some really tough positions,” Conlin said and stressed that the team’s slow start was not the fault of any one player. Still, he decided that against Connecticut, DeMorat gave Fordham the best chance to win.

DeMorat finished the afternoon 17-27 (63 percent) for a modest 184 yards, one touchdown and one interception.

The interception, though, a costly pick-six midway through the third quarter, quickly ended any momentum the Rams had built coming out of halftime. On the previous drive, DeMorat was effective both on the ground and through the air, and a 25-yard touchdown run by sophomore Zach Davis put Fordham down by just four points, 13-17.

It seems that, as a passer, DeMorat is already starting to develop a chemistry with receiver Austin Longi and tight end Isaiah Searight. The two targets combined for 119 yards, eight receptions and one touchdown. Building rapport with his teammates will be crucial for DeMorat if he is to continue to develop as a quarterback.

Late in the third quarter and throughout the fourth, the Rams had countless opportunities to take the lead, but drive after drive, they failed to move the ball with any kind of confidence or efficiency.

“There’s going to be a lot of plays as a team, as a coaching staff, you wish you could have back,” Conlin said. “The kids fought until the very end.”

Particularly, the Fordham defense rebounded against a Connecticut offense that looked crisp early on. The Rams didn’t allow any defensive points, forcing six straight punts, in the second half. They only recorded one sack, but held Connecticut to an impressive 3-of-14 on third down. The defense’s aggression, especially against the run, revealed a unit that has made massive strides since giving up 52 points to Richmond two weeks ago.

“Those guys played their hearts out,” Conlin said of his defense. “CCSU does a great job. They’re a very well-coached team.”

DeMorat and the offense simply couldn’t capitalize on any opportunities they had to drive the field and score. Following the interception, the Rams’ final five offensive drives ended with three punts and two turnovers on downs, and none lasted longer than three minutes and 15 seconds.

The Rams’ bye week could not come soon enough. Their next game will be at home against Georgetown on Oct. 6 before travelling to Lehigh the following week. Conlin sees the break as a chance for the team to regroup and work on fundamentals.

“Typically, you learn more from losing than you do from winning,” he said. “The question we put to the team was, ‘What kind of team do you want to be?’” Conlin stressed that discipline will be key moving forward, but he saw positive trends on both sides of the ball Saturday. “I think,” he said of his players, “they want to be the right kind of team.”