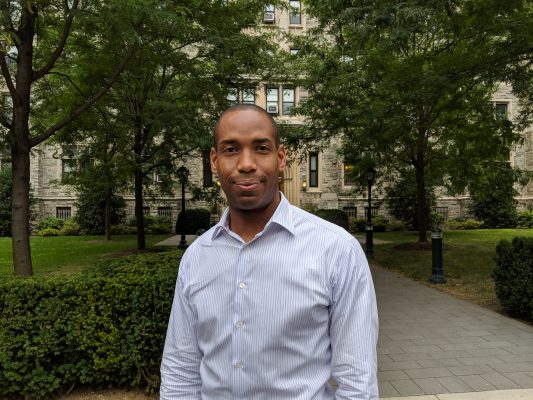 Peat, a new face at Fordham, extends a welcome to all of campus. (COLIN SHEELEY/THE OBSERVER)

By CARMEN BORCA-CARRILLO and COLIN SHEELEY

“Good,” “better,” “best.” These were the words Kareem Peat, Fordham University’s new Title IX coordinator, used to describe everything he hopes he has done, everything he does and everything he aims to do.

“Everywhere I go, every time: Do better. Be better — whatever that means,” he said in an Aug. 31 interview with The Observer. “This is my best at 8 a.m. on a Friday … I’ll do my best. Maybe if you come back in six months … I’ll just do my best at that time, whether I’m sleep deprived or really rested.”

Indeed, Peat’s record is exhaustive. With a near 10-year stretch in the legal sector, he holds degrees from the University of Michigan, New York University School of Law and Harvard University Graduate School of Education, the diplomas of which leaned against the bare walls of his Cunniffe House office, into which he was still settling.

Peat, however, said his former office in Cornell University’s Day Hall reminded him of his first opportunities in Title IX, work that he and those he admires “really love doing.”

Speaking of his call to higher education, Peat said he “knew that you could directly impact people’s lives for the better.”

“When you can talk to people and make them feel like you’re listening and that you’re sincere, and empathetic, that gives them the ability to keep going,” he said, “to keep sharing their experience, or to remain as a member of the community: that’s a wonderful experience.”

Prior to his time at Fordham, Peat began his career as an investigator in higher education at Cornell University, where he rose through the ranks to Deputy Title IX coordinator for investigations and lead Title IX investigator in two years. During his time there, he and his office fielded student-requested reviews of conduct by the Office of Civil Rights (OCR), which Peat welcomed as a chance for students to engage in a fair process.

“Any institution I’m involved with- we encourage people to pursue all of their options, and we are more than happy to let them know of all of their rights,” he said. “If someone would like to review our conduct or have someone else review our conduct, they’re welcome to do so. And we certainly won’t hide that.”

For Peat, Title IX investigations represent an opportunity to directly impact people’s lives and help others realize their academic potential. He first decided to pursue the path after taking a course on Title IX and its effect on students at Cambridge. There, he said he came to understand how an empathetic investigator can give students the ability to remain part of their community and continue sharing their experience.

While Peat already possessed much of the analytical skill necessary for his position from his years in legal work, he volunteered as a staffer for the Online Hotline and as an advocate for patients’ healthcare in hospitals to gain emotional insight into the sensitive topics that Title IX cases concern. “That was the time where I really learned how to speak to people,” Peat said. “It’s a position that I hold to this day … if I’m in a meeting with someone on a Title IX matter, if I’m doing most of the talking, I’m not doing it right.”

Listening and observing, rather, are much more valuable to Peat. He supplemented his volunteering with advice and lessons from experts in the Title IX circuit. Jill Zellner, Title IX coordinator of Tufts University and one of the officials Peat consulted, said that when she spoke to him, she had wished her office was in a position to hire him then and there. “Fordham is fortunate to have such a thoughtful and empathic person,” she said in an email to The Observer.

Although, like most fresh administrative hires, Peat is primarily set on familiarizing himself with the new academic environment, he acknowledged that Fordham’s Jesuit principles have already given him an idea of how to approach the new position. “As an institution that highly promotes faith, hope and love, it would be silly not to take those core tenets in every room with you and bring them to every discussion,” he said. “For us to exude or represent the qualities of the institution in all of our communications, that’s important.”

Communication as a whole, in fact, is the first step in Peat’s game plan. “I literally would like to say hello to everyone,” he said. “My goal is to let everyone know that I’m approachable and I’m really just interested in their well-being.”

Peat said his favorite area on campus is the Third and Webster Ave. Gate, where he likes to speak with Bert Scipio at the guard booth. Scipio too recognized Peat’s eagerness to put his finger on the “heart pulse beat” of the university, but worried that members of the community would be slower to warm up to him because he, like Scipio, is a person of color. Peat said that while he had never spoken to Scipio about it, he wanted to stress that his identity was complex. “I am a member of the Fordham community,” he said, “and I am African-American, and I am Caribbean-American, and I am a member of a loving, supportive family.”

To that end, as the university’s new Title IX coordinator, Peat said he is determined to establish himself within the institution, socially and fundamentally. To get to this point, “I did everything I could, learned everything I could,” he said, but his future interests are simple: “Just the people and the mission.”