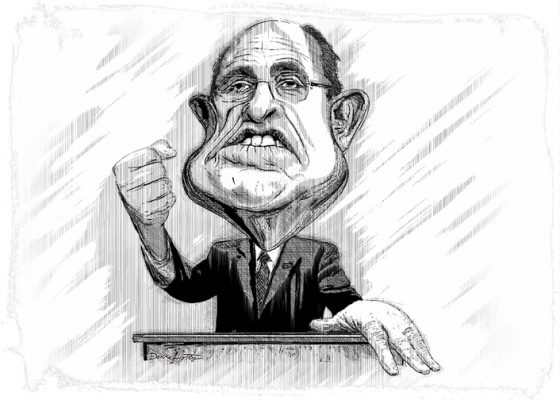 With round-the-clock appearances on cable television and enough conflicting legal theories given on such programs to make a seasoned political analyst’s head spin, it’s unclear how much Giuliani thinks before he speaks. (DonkeyHotey VIA FLICKR)

As the seemingly endless scandals of the Trump administration continue to materialize in places both expected and unexpected, a bombastic former prosecutor and mayor on the president’s legal team is the newest and most convincing example as to why many in the public fear the possibility of political misconduct by President Donald Trump. His name: Rudy Giuliani.

Giuliani’s attempts at creating a legal defense for Trump against a possible probe for obstruction of justice are spotty at best. With round-the-clock appearances on cable television and enough conflicting legal theories given on such programs to make a seasoned political analyst’s head spin, it’s unclear how much Giuliani thinks before he speaks.

Giuliani was added to Trump’s legal team in April 2018. While he committed significant work to Trump’s presidential campaign in 2016, he kept a relatively low profile on the national stage at the time, save for a speech at the Republican Party’s convention. His employment as a member of Trump’s legal team was a response to the ongoing special counsel investigation that began in May 2017. About a week after Trump fired FBI director James Comey, Robert Mueller was appointed as a special counsel to oversee an investigation into possible ties between the Trump campaign and Russia. The investigation has been a success in that it has helped uncover proof of improper and sometimes illegal actions involving people in Trump’s inner circle related to Russia.

Initially, Mueller’s investigation enjoyed broad public support, including that of most Republicans. Mueller’s reputation and personal integrity is considered sterling by a consensus of public servants from across the aisle. However, as indictments have started coming out by the number, even baseline support for the investigation in general has now become partisan — an utter travesty in a country far too polarized over political differences already. Trump has derided the investigation more and more, often calling it a “witch hunt” on Twitter and at campaign-style rallies. Much of his political base eats up such aggressive and often factually incorrect rhetoric.

When Giuliani joined Trump’s legal team, public opinion over the Mueller investigation was very divided. While some who have bought into the mentality that Mueller’s investigation is a “witch hunt” may smile at Giuliani’s rhetoric on television news shows, his slapdash legal “strategy” is causing great harm by exacerbating extreme political polarization.

Mueller’s investigation is not intended to be partisan. Contrary to what some far-right news pundits may claim, the special counsel does not have a conflict of interest in spite of the fact that he knows Comey. Progressive activist and former Congressman Tom Perriello noted on Twitter that the special counsel’s investigation “has moved faster and at lower cost than previous probes.” It is understandable that some Americans may feel exhausted from the non-stop media coverage of the special counsel investigation, but in no way does pervasive media coverage undermine or threaten its inherent legitimacy and necessity to our country. In contrast, Giuliani seems to have no legal strategy other than to be a metaphorical conductor of the “discredit Mueller” train, while tooting his own horn at every possible second in the process. It is likely that many Trump followers in the media feel that they must discredit Mueller because of the possibility that should criminal activity committed by Trump be uncovered, the probe could pose an existential threat to this presidency. Since this summer, Giuliani has claimed that collusion is not a crime, stated that Trump does not necessarily have to mean something when he tweets about the investigation and dipped his toes in the water of Orwellian nonsense by saying that “truth isn’t truth.”

Giuliani’s half-baked attempt at legal strategy is tailor-made to stick a knife in the beating heart of political division. Spirited political disagreements will always be as American as apple pie, but the rejection of universally respected and proven facts in pursuit of a political goal is not normal. If truth isn’t truth, then Democratic truth could be different from Republican truth. Unfortunately, we already live in a society where that often seems to be the case, given the ideological gap between Fox News and CNN or MSNBC. Citizens of good faith and conscience should feel ethically obliged to refuse to make this division in the perception of facts any worse. Sadly, as Giuliani has claimed that the Trump legal team is preparing a “counter-report” to Mueller’s report, we will likely head further down the rabbit hole of extreme partisanship.