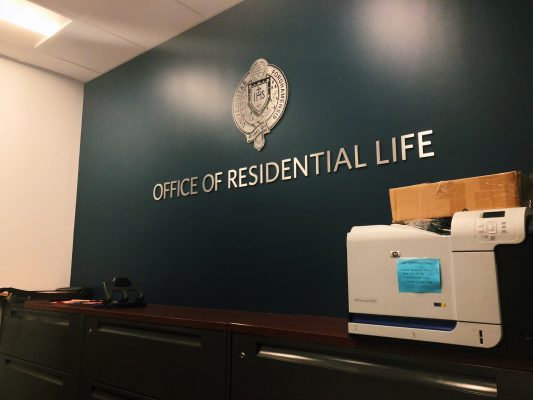 Keith Eldredge, dean of students at Fordham College at Lincoln Center (FCLC) wanted to be careful when he and Jenifer Campbell, senior director of the Office of Residential Life spoke with the past and current student members of the Residence Hall Association (RHA) on Aug. 20. Over the summer, he and Campbell had decided that the residence halls would not go through with a majority of the changes to the Guest and Visitation Policy proposed by RHA last spring.

Among the rejected provisions was a motion to remove the gender and sex-based conditions from the university’s guest pass procedure. Under the current policy, undergraduate residents are permitted to obtain overnight passes only for guests of their same sex.

Eldredge cited the input of “other constituencies” as a key factor in Residential Life’s consideration. “The policy aims to be sensitive to residents’ needs for privacy in a community environment within the context of our mission and identity as a university in the Jesuit, Catholic tradition,” he said.

Samuel Blackwood, FCLC ’19 and former RHA advocacy coordinator said he was frustrated with the outcome of the larger initiative — he primarily led the campaign last year — but particularly with the conclusion of the inclusive guest pass provision, by which he had hoped to combat a policy that, according to the proposal “invalidates the identity of trans and intersex students.”

“I’m disappointed that the voices of the students weren’t heard in this situation,” Blackwood said, “and that the people who are most impacted by this policy are the ones whose voices have been drowned out.”

Aria Tejano, a former student at the university who is transgender said she was not surprised with the decision. “Unless a major shakeup occurs, I doubt the administration will ever change. Working with them to change is almost certainly futile,” she said. “And sadly, for the people who bear the burden of Fordham’s bigotry, the only choices are to submit or leave.” Tejano, who left herself, wrote an editorial in The Observer in April about Fordham’s dorm policy.

Eldredge, admitting that the current rules “impact trans students differently” and expecting the RHA members’ dissatisfaction, said that he didn’t “want to set them up.”

“I did say to them, I don’t anticipate that a broad change on the policy related to opposite gender guests for undergraduates is happening this year,” he recalled. What he could provide them, he said, was future conversation. “I want to be genuine with them,” he added, “but did say that there might be some continued opportunities if we want to continue the dialogue.”

Eldredge said he could not be sure if they would take him up on the offer. Blackwood, while open to discussion, concluded: “I think my time taking a proactive stance, a proactive position on this thing is done.”

He did, however, express confidence in his successor, Vasilios Livanos, Gabelli School of Business at Lincoln Center (GSB) ’21, who now helms the advocacy branch of RHA. “He and I talked at the end of last semester and he’s very passionate, he’s very intense,” Blackwood said. “I think that he’s going to do a great job.”

Livanos declined to comment on any future plans he had for the proposal; however, RHA President Minna Suh, FCLC ’20, said in an email that the association intends to follow up with Eldredge and Campbell. “We plan on continuing this much needed conversation and pushing for change as much as we can,” she said.

According to Eldredge, the Office of Residential Life approved one provision to make the language of appealing a policy violation more explicit in full. Another specification, which sought to reduce the amount of money owed for a policy violation from $15 to $5, was altered so that the first fine was instead waived, with subsequent offences incurring the standard incremental $15.

Additionally, there were changes that Eldredge said could be well within reason for the residence halls in the future. He explained that one element of the proposal, creating a private database of current guests accessible by Public Safety guards for reference, would be impossible to implement with Fordham’s current security system, but that he was looking into more compatible technology.

Other changes, Eldredge said, the university was less willing to accomodate. Along with the inclusive gender guest pass provision, Residential Life turned down five of the seven changes proposed. Among them were motions to implement same-day guest passes, 24-hour access to McKeon Hall for freshmen and online guest pass registration.

Each of these presented an uncertainty that Eldredge said would potentially weaken the policy as a whole. “The design behind the guest and visitation policy is really about safety and security,” he said. “There are exceptions, and we’re willing to be flexible where it makes sense to do that,” however, a blanket procedure bore too many “difficulties.”

Ultimately, Blackwood said that despite the result of the proposal, he believes the administration better understands the position of the students who pushed for the changes, as well as their dedication to what they believe in.