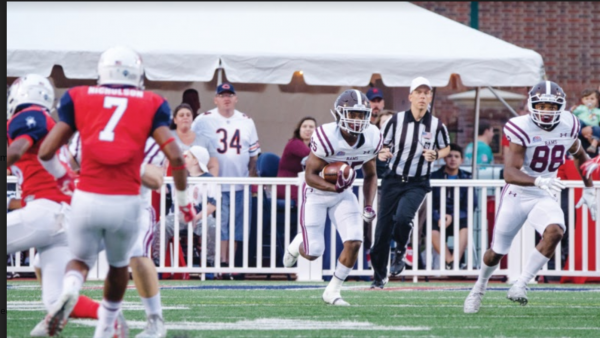 The rams giving it their all against the Richmond Spiders.

The kickoff on the Sept. 3 season opener in Charlotte was delayed 74 minutes due to lightning, and halftime was extended for another 75. Indeed, after Fordham’s 34-10 loss to the 49ers, it felt as if the official start to the football season had been delayed as well. But it didn’t stop there. Having traveled now 2,000 miles for their first two games of the season, the road seems to have worn on the Rams.

Last Saturday’s 52-7 Week 2 loss to Richmond echoed Army’s 64-6 rout of Fordham at last year’s season opener. The 0-2 Rams have now been outscored 86-17 by their opponents.

Head Coach Joe Conlin, Offensive Coordinator Mike Burchett and Defensive Coordinator Paul Rice are all in their first year with the team. Conlin won the Ivy League Championship last year while offensive coordinator at Yale, but he’s still looking to replicate that success here at Fordham.

During camp, Burchett said that he wanted the offense to “play fast,” and to employ a “heavy run game.” Neither goal was accomplished Week 1 at Charlotte; Fordham struggled to consistently move the ball downfield, and finished the night with an abysmal -9 total rushing yards. The team went 3-15 on third down.

Neither team played particularly well in the first half, but the Rams defense appeared to show some promise early on. After a 71-yard run by 49ers junior running back Benny LeMay on third down, Fordham managed an impressive goal-line stand and held Charlotte to 3 points.

Fordham led early in the second quarter 7-6 after a 70-yard touchdown pass by senior quarterback Luke Medlock, but after that, the 49ers began to run away with the game.

49ers coach Brad Lambert, in an interview with the Charlotte Observer, said that the Rams came into the game with a “good energy level,” but after the second weather delay at halftime, fatigue seemed to set in for Fordham. The team put up just 3 points in the second half, as Charlotte’s defense shut down Medlock and the offense.

The Rams, in fact, had moderate success moving the ball through the air; Medlock completed 22 of 47 (47 percent) for 296 yards. Senior receiver Austin Longi caught eight passes from Medlock for 113 yards and one touchdown.

But for Fordham, yards simply couldn’t translate into points. A pick-six by 49ers linebacker Juwan Foggie late in the fourth quarter all but sealed Fordham’s fate.

Things, too, were not destined to improve, as the team beat a less-than-hasty retreat to Richmond last weekend, hoping to weather their season-opening storm. Yet, while the rain held up for Saturday’s game, the same could not be said for the Rams’ offensive line.

The Richmond Spiders sacked Fordham quarterbacks a total of five times last Saturday. Medlock, down 52-0 at the end of the third quarter, was benched in favor of freshman backup Tim DeMorat. With nine minutes left on the clock, DeMorat led the Rams across the goal line on their only touchdown drive of the night, but it was far too little too late. He would finish the game five-of-six for 66 yards.

Almost nothing went right for Fordham in Richmond’s Robins Stadium. For the second straight week, the Rams ran for negative yardage; their -3 was a slight improvement over -9 against Charlotte.

Fordham trailed 7-0 after the first quarter, a deficit that would grow to 17-0 by halftime. It wasn’t until the third quarter, though, that the Spiders took over the game. In the first six minutes of the second half, Richmond scored three touchdowns, and, by the end of the quarter, had put up 35 unanswered points.

Spiders quarterback Kevin Johnson threw an impressive 14-21 (67 percent) for 273 yards, two touchdowns and no picks. He also rushed for two additional scores. Medlock would end the night 17-32 (53 percent) for 125 yards, no scores and three interceptions.

For the Rams, Longi hauled in four catches, but they totalled a mere eight yards. His 143 career receptions do mark him ninth all-time on the Fordham receiving list, however.

Fordham begins what is shaping up to be a much-needed homestead this week as they prepare to take on Stony Brook University on Saturday in the Bronx. The Rams are looking to avoid their first 0-3 start since 2009, when they finished the season 5-6 winning 2-4 of in-conference games.

Stony Brook enters the week 1-1, coming off of an energizing 50-21 victory last week against Bryant. Following a 38-0 loss in week one against Air Force, the Seawolves regrouped to carry out a dominant performance. Fordham will have to do the same if it hopes to keep its season afloat.

The Rams will remain at home against Central Connecticut State and Georgetown until they travel the (relatively) short distance to Lehigh on Oct. 13.