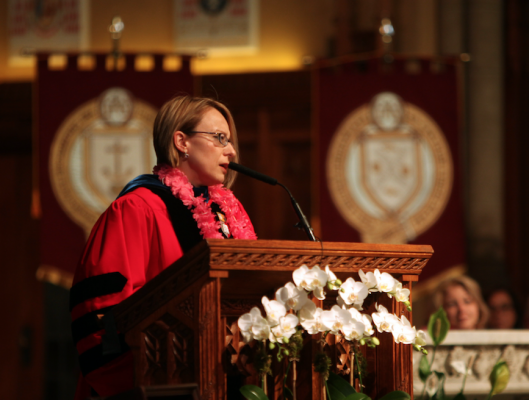 “Stephen Freedman opted for life,” Eve Keller, Ph.D., president of the Fordham Faculty Senate, said last Thursday. She was speaking at the service of remembrance held for Freedman in the Fordham University Church, and the love and energy with which Freedman had lived was evidenced by the hundreds of faculty, friends and family who were in attendance.

Many who spoke at the service grieved the loss of such an admired, accomplished and successful administrator, but hung around the necks of the many deans and academics who sat in the church choir was an unexpected sight: a bright pink Hawaiian lei.

Eva Badowska, dean of the Fordham Graduate School of Arts and Sciences, recalled at the service an old photo in which a lei can be seen peeking out from underneath Freedman’s gown, hood and formal academic wear.

The lei, she said, was a reminder for him to live his life to its fullest.

“He used to say to me,” Badowska continued, “‘Will you visit me when I’m on the beach in Hawaii?’” There was a hint of irony in the question, as Badowska said that Freedman was “just about the last person who could sit quietly on a beach” in retirement. He worked tirelessly, passionately, generously.

But still, she said, the lei and the idyllic beach scene represented for Freedman “a future beyond the here and now,” one where there would finally be ample time to cherish his friends’ company.

Indeed, at the heart of Freedman’s work, both here at Fordham and throughout his career, lay a deep care for others.

Virtually every speaker at the service emphasized the genuine, intense empathy Freedman possessed. Jonathan Crystal, interim provost and associate chief academic officer in the Office of the Provost, was an esteemed colleague and a close friend of Freedman. He recalled the “compassion [Freedman] brought to everything he did.”

“It wasn’t an act,” Crystal told those in attendance. “He was genuinely interested in other people.”

Interest in and compassion for others guided the course of Freedman’s work at Fordham. The projects he oversaw expanded the university both at the local and global level. Nonetheless, he managed to give an individualized attention to each of those projects and to those involved in them.

Freedman was “the kind of decision-maker that would seek input from lots of different people,” Crystal said. “I think he always wanted to know what other people thought, what their ideas were, what their suggestions were.” No matter the size of the project, Freedman always wanted to build personal relationships with his colleagues. “It wasn’t all business,” Crystal said. “He wanted to know how people were doing and what was going on in their lives.”

As provost, Freedman would inevitably have to make difficult and sometimes unpopular decisions; however, Ellen Fahey-Smith, associate vice president and chief of staff in the Office of the Provost, stressed that Freedman would put the utmost care not only into making a decision but also in communicating that decision and its effects once made.

“His approach,” Fahey-Smith said of Freedman, “was always one to convey and communicate those decisions in a way that was understanding of how others might feel [about them].”

Even if a decision went against the interests of an individual or group, those involved “knew that he had listened to them and taken into account their viewpoints,” Crystal said. “Sometimes that makes it easier to have a decision go against you, if you feel that the person who made it heard what you had to say.”

As Freedman worked to broaden Fordham’s international presence, his ability to form personal connections proved to be an invaluable skill. During his tenure as provost, university programs in London, Beijing and Tokyo flourished; the Fordham London Centre particularly is gaining recognition both as a branch of the university and a standalone institution.

There was an opportunity in London, Freedman saw, to bring together the drama, business and liberal arts programs to create a unified student body. “His vision there,” Fahey-Smith said of the London campus, “was to take it from a standalone program to a true, integrated center.”

Instead of treating the three academic departments as distinct programs, Freedman would ask, “How do they all interact together?” Fahey-Smith explained. “How do you offer extracurricular activities to all those students?” She stressed that Freedman understood that the academic experiences of all students could be “enriched” through exposure to other disciplines.

It was important, in considering a location for the London Centre’s new Clerkenwell building, to find a space that “really could be the future of the Fordham London Program,” Fahey-Smith said. The space had to “fit the needs of our program … It was really important that it’s truly functioning as a center.”

Born in Montreal, Freedman came to the United States as an immigrant. Consequently, Crystal said, “he always had that international perspective. He was always fascinated by other cultures.” Nevertheless, for Crystal, Freedman’s ultimate goal in expanding Fordham’s presence abroad was to provide Fordham students and faculty with opportunities to study, research and develop partnerships “across the world.”

At the service, University President Rev. Joseph M. McShane, S.J., described Freedman as an “academic diplomat.” Fahey-Smith explained what made Freedman such an effective ambassador, both in New York and abroad, for the university: “He had such a passion” for academia and the Jesuit mission, she said. “He brought that everywhere he went.”

For the university, it will be nearly impossible to fill the void that Freedman’s death has brought, but both Crystal and Fahey-Smith feel that the Office of the Provost is well-prepared to move forward. “We had a very good sense of his vision for the university,” Crystal said. “His emphasis on academic excellence, his concern about students, his pro-faculty perspective, those are things that we all share.”

“He really urged me to develop my own ideas and my own vision for the university,” Crystal said of Freedman. “He invited me to disagree with him and to challenge him, and I think that, in some ways, is carrying on his legacy.”

“Stephen was always so alive,” Fahey-Smith added. “but we are really committed to ensuring that all of the momentum that has been in place [continues] … and Fordham continues to rise as a university.”