The History of Amphetamines: A Story of Abuse and Stigmatization 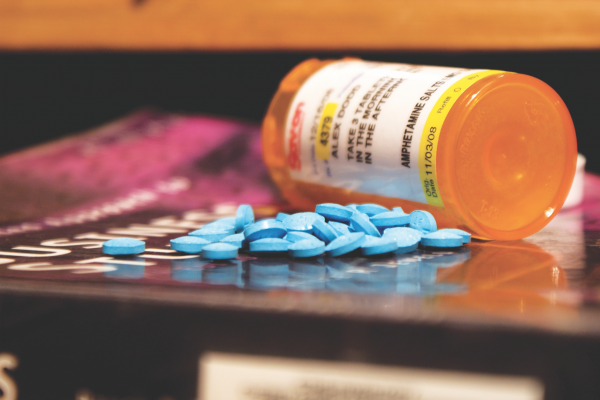 The ancestry of Adderall dates back to 1867 when a Romanian chemist named Lazar Edeleanu unintentionally synthesized the first amphetamine. Because Edeleanu was more interested in his research refining crude oil, he abandoned his research on stimulants. It took another four decades to discover the potency of this central nervous system stimulant. Amphetamine was first utilized by the firm Smith, Kline & French (SFK) in 1928 as a pharmaceutical tool to combat congestion because of its ability to clear respiratory passages. The packaging of this easily accessible over-the-counter inhalant called Benzedrine consisted of a cotton strip soaked in 325 mg of amphetamine oil. From then, it was not long before the first Amphetamine epidemic began. The drug has mood-elevating effects including its efficacy in reducing anhedonia, fatigue and drowsiness while concurrently increasing alertness and concentration and heightening the senses. To magnify the inhalers’ euphoric effects, people began removing the strip of amphetamine oil and chewing or injecting it into their body for a quicker high.

Amphetamines work by releasing chemical messengers called neurotransmitters into the synaptic cleft, a small space between adjacent neurons. This delays the time it takes for the neurotransmitters to be reabsorbed into the original neuron. The neurotransmitters involved are dopamine and norepinephrine, both of which increase arousal and productivity. The longer these neurotransmitters remain in the synaptic cleft, the longer a person can stay awake and focus. These physiologically and psychologically coveted effects increased the public desire for the pills, leading to privately funded studies by SFK to further the scope of the drug’s application. In 1934, the American Medical Association approved the drug for the treatment of weight loss, minor depression and sleep disorders thereby expanding amphetamine’s consumer base to nearly everyone in the nation.

During War World II, amphetamines were supplied to soldiers and airmen to counteract their increasing sleep deficit and their alertness. When the war ended, the amphetamine fixation perpetuated its use among civilians. People valued the versatility of amphetamines in treating different physical and mental conditions. For example, many stars from the Golden Age of Hollywood in the early 1930s to the late 1950s fell victim to the abuse of these pills in order to maintain their weight and be able to withstand long hours of filming.

Just 10 years after the introduction of amphetamines in the United States, the drugs promptly became known as “go pills” for soldiers, “pep pills” for movie stars, “diet pills” for suburban women and “smart pills” for college students.
Although the Food and Drug Administration mandated that the drug can only be acquired with a prescription in 1959, the consumption rate of amphetamines skyrocketed; normalizing the illicit use of the drug. By the conclusion of the decade, other medications were introduced and endorsed by psychiatrists to counteract depressive symptoms; however, the anti-psychiatric sentiments of the time guided individuals to go to their private medical doctor for a prescription of the pill.

The counterculture of the ’60s can be distinguished partly by the recreational use of many drugs including amphetamines and methamphetamines. Methamphetamines are a more lethal and ersatz version of amphetamines. There is a structural difference between the two substances that allows methamphetamine to more rapidly enter the brain producing additional detrimental and addictive effects. A large quantity of middle-class American society received prescriptions for low-dose amphetamines from their private doctors to alleviate the stress of their daily routines. Members of the lower class and people from marginalized groups relied mostly on homemade methamphetamine, broadly known as crack, because of its widespread availability.

Nevertheless, high profile public figures, such as President John F. Kennedy, were no exception to the stimulant compulsion. Kennedy was regularly injected with 15 mg of methamphetamine to treat the injuries he obtained from the war by his private doctor known widely as “Dr. Feelgood.” The rampant abuse of amphetamines was partially due to the introduction of intravenous injections which directly inserted the drugs into the user’s veins. Taking the drug intravenously proved to be more effective in inducing amplified euphoria.

The overprescription and illegal use of the medication raised an alarm for national concern, leading to the drastic shift in public opinion. Studies conducted worldwide displayed its negative effects, garnering a great deal of attention from individuals using or already addicted to the drug. Newly Discovered side effects like psychosis, addiction, malnutrition, major mood shifts, hallucinations and irregular heartbeats turned away many users.

But while the stigmatization of the stimulant had begun, the abuse did not stop there.

In 1996, amphetamine was reintroduced as a prescription drug by Shire Pharmaceuticals to mitigate symptoms of Attention Deficit Disorder (ADD/ADHD) based on a 1936 study conducted by Charles Bradley on a group of boys with learning disabilities. Its new branding: Adderall.

An individual with ADD/ADHD displays symptoms of hyperactivity, poor concentration, and impulsiveness. According to the Center for Disease Control and Prevention, 11 percent of children aged 4-17 are diagnosed with ADD/ADHD. There is a general consensus amongst psychiatrists that individuals diagnosed with the condition should either be therapeutically or medically treated in order to alleviate their symptoms. However, a residual stigma against amphetamine utilization turns people away from treating their ADD/ADHD even though studies show that when amphetamines are taken under proper medical supervision in prescribed doses, abuse and addiction is not a risk factor. The stimulant provides a response rate of 70-80 percent in the case of treating ADD/ADHD and helps individuals control their impulses and filter out distractions.

Nowadays, Adderall is a mainstream drug for students looking to cope with the stress of school and maintaining grades. Studies show that 60 percent of individuals who abuse Adderall are between the ages of 18 and 25. There is a widespread misconception among college students that Adderall makes you smarter or that they are entirely harmless with no harmful effects. Ramin Mojtabai, MD, Ph.D., a professor of mental health at the Bloomberg School of Public Health, emphasizes the need to educate young people about the possible adverse effects of Adderall abuse. In addition, he proposes a possible solution in which Adderall is regulated in a similar way to how painkillers are. Mojtabi suggests that physicians enter prescriptions into a universal database to eliminate the possibility of a patient receiving one type of medication from multiple doctors.

Amphetamine abuse is not a new phenomenon; soldiers, students, actors/actresses and ordinary individuals have abused the drug since the early 20th century. When the popularity of the drug declined towards the mid-20th century, the drug entered a new stage of social stigmatization. Today, the drug has been condemned because of its scandalous history. However, it is important to acknowledge the medical benefits of Adderall for people with ADD/ADHD. Stigmatizing the drug itself only discourages people who may need it from using it. Instead, we should impart knowledge of the consequences of Adderall abuse amongst vulnerable populations to avoid further abuse.