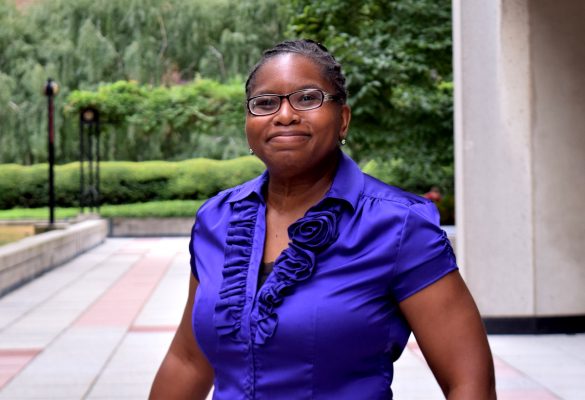 Fordham’s Natural Science faculty recently finished a productive summer of scientific research. Assistant Professor of Chemistry Marie Thomas presented a poster at the International Conference on Phosphorus Chemistry in Budapest, Hungary and spent the rest of her summer researching a class of chemical compounds termed ionic liquids. Unlike most ionically-charged materials like sodium chloride (table salt), ionic liquids have melting points under 100 degrees celsius and are usually liquids at room temperature. These compounds were originally developed for batteries, but their applications later proved to be numerous. Scientists now use ionic liquids as catalysts and solvents, and the pharmaceutical industry also utilizes ionic liquids.

Thomas’ main research involves a project she began three years ago in which she sought to use ionic liquids to dissolve both cellulose, one of the polymers in plant cell walls and chitin, another polymer that makes up the invertebrate exoskeleton. These large molecules are extremely strong, so attempting to dissolve cellulose and chitin is a challenge. Thomas hopes that the resulting ionic liquid solutions will allow these biopolymers to become more usable fuels and chemicals in industry.

On top of dissolving cellulose, Thomas embarked on two other projects involving ionic liquids this summer. One project is a study of the antimicrobial properties of ionic liquids in  collaboration with Vicki Flaris of Bronx Community College. Flaris uses ionic liquids to create antimicrobial surfaces on plastic polymers. Thomas’s third project is in conjunction with Alma Rodenas-Ruano, assistant professor of Biology. Thomas and Rodenas-Ruano are investigating the toxicity of ionic liquids on zebrafish, which are small tropical fish. As ionic liquids become more widely used, safe disposal of these compounds becomes an increasingly important area of research. “Unfortunately, there is not a lot known about the toxicity of these ionic liquids,” Thomas said, “but that’s beginning to change.”

Most Fordham professors take on student research assistants to aid in their various studies. Neuroscience major Sultana Morioum, Fordham College at Lincoln Center ’19, decided to help Thomas and Rodenas-Ruano explore the toxicity of ionic liquids this summer. This summer, most of Morioum’s and Thomas’s time was spent in one of Rose Hill’s chemistry labs synthesizing ionic liquids for the study. The synthesis Morioum performs in lab is a tedious, yet rewarding process, she said – one that gives her the opportunity to transplant her knowledge from class into a real-life application. Morioum explains that she enjoys working with ionic liquids, but “The only problem is cleaning the glassware.”

Morioum is currently in the process of starting the second phase of the toxicity study: testing the zebrafish. Using the compounds she and Thomas created this summer, Morioum will be introducing these ionic liquids to zebrafish with Rodenas-Ruano at Lincoln Center’s zebrafish lab on the eighth floor of the Leon Lowenstein building. The lab can house a whole population of zebrafish at every stage of their lives, allowing  for an in-depth analysis of ionic liquid toxicity on marine life. Morioum remarked of Rodenas-Ruano, “I can see why Professor Alma likes watching them all day, because I can literally watch them all day. It’s so cool that you can actually get up close in the microscope and see their heartbeat. I feel like a surgeon.” Naturally, Morioum is eager to help finish the rest of Thomas’s and Rodenas-Ruano’s toxicology work.

Science research like the ionic liquid studies Thomas undertakes is just a small fraction of work Fordham professors do every year. Faculty from various disciplines collectively pursue research to further investigate the intricacies of their respective fields. As in the case of Thomas’s research, both students and faculty can benefit from performing research.