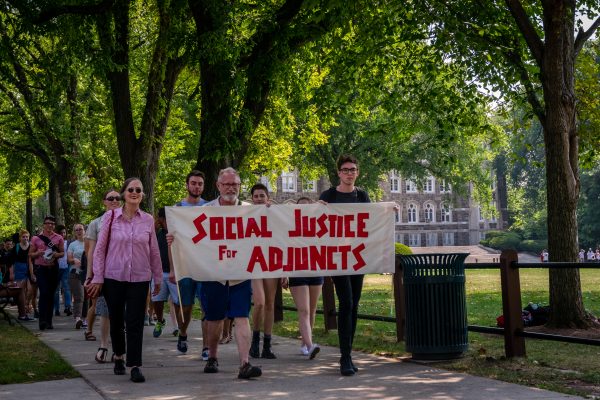 On July 17, the union of contingent faculty ratified their first contracts for full-time and part-time professors following a year-long process of negotiations. The three-year agreement with the Fordham administration enhances faculty benefits and working conditions for adjunct and full-time non-tenure-track professors.

An estimated 750 professors will benefit from the two contracts, granting them increased pay raises and better career security.

The three-year agreement is set to increase the per course rates by 67-90 percent for the majority of Fordham adjuncts. Additionally, some of the lowest paid full-time members of the university will receive a $14,000 salary increase, while full-time and senior lecturers will see a median 13 percent increase in pay.

Alongside the ad-hoc organization Fordham Faculty United (FFU), who supported the initiative, they strove to “give hope to…colleagues without a union across the country that we can make change when we organize,” as stated on the FFU’s public Facebook page. It was, in their eyes, a “historic first contract.”

Fordham University Professor Diane George was among the members of the union negotiation committee. George stated that “we are all thrilled to be getting significant pay increases and job security in our first contract, and excited we were able to come to an agreement so quickly.”

Both the Fordham Board of Trustees and the unionized faculty members swiftly ratified the agreement, with 99 percent of union members voting ‘yes,’ according to George.

The two contracts – one governing part-time and the other full-time – allow a two-year probationary period for all faculty and largely ensure improved job security.

Additionally, the contracts include two fully paid semester-long professional development leaves each academic year for all full-time faculty members who have worked for at least five years.

On their Facebook page, FFU celebrated their victory, proving to those who set their contracts that they “are powerful when [they] stand united.”

“In addition to the more tangible benefits offered in the contracts, we believe that the new contracts will better integrate non-tenure track faculty into the Fordham community and foster a work environment that will continue to attract top faculty to Fordham,” he said.

Although the union aspires to achieve much more in the long run, George acknowledged that it has made “a huge step forward, towards [its] goal of transforming the exploitative system of contingent employment.”