“The Vagina* Monologues” Spark a Conversation 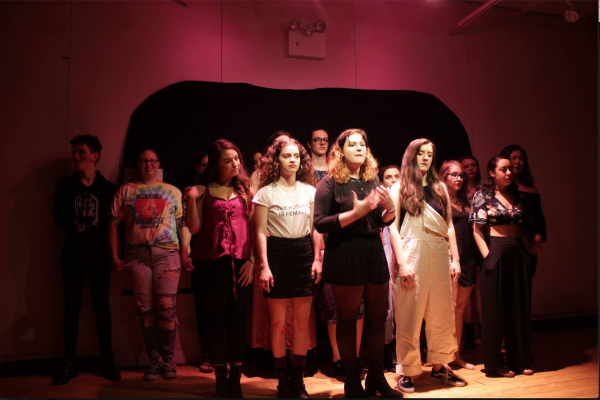 Performers wrote monologues describing their experiences with sexual and relationship violence, and they expressed their frustration with Fordham’s leniency toward perpetrators of sexual violence and assault. (COURTESY OF ELIZA PUTNAM)

The annual production of “The Vagina* Monologues” performed at Fordham and in spaces all across the country, sparks conversations about a number of social issues. The play, originally written by Eve Ensler in 1996, shed light on topics such as body hair, menstruation and sexual experiences. Fordham students have been performing “The Vagina* Monologues” for the past 13 years, and in the past two years, have featured a large number of student-written monologues.

This year’s production, directed by Eliza Putnam, Fordham College Lincoln Center (FCLC) ’18 and Beatriz Martinez-Godas, FCLC ’18, featured some monologues from the original play, but was almost exclusively composed of student-written monologues. All proceeds were given to Girls Educational and Mentoring Services and to the Sylvia Rivera Law Project. The latter organization’s website states that it “works to guarantee that all people are free to self-determine gender-identity and expression,” according to the organization’s website.

“The Vagina* Monologues” took place in Franny’s Space from April 19-21. The room was warm and intimate, bathed in rosy lighting, which amplified the sense of unity among the performers and intensified their connection with the audience members.

The programs noted that Fordham’s Office of Student Affairs has never supported or officially recognized  “The Vagina* Monologues,” and included an expression of gratitude to the Women, Gender, and Sexuality Studies department “for their guidance and financial support, and their solidarity with student survivors and advocates.”

It was emphasized ― in promotional materials, as well as at the show itself ― that the title of the show had been amended. The word “Vagina” bore an asterisk, indicating that the show is meant for “*any vaginas, all vaginas” and “not just vaginas.”

The push for inclusivity was visible in the diverse array of identities and experiences of the performers as well as the subjects they chose to present to their audiences. The show featured monologues discussing sexual violence, gender and sexual identity, and misogyny. Although large parts of the audience were brought to tears over many of the monologues, various performers took a comical approach to exploring themes such as menstruation and sexual encounters.

Carmen Borca-Carrillo, FCLC ’20, grappled with weighing comedy versus seriousness. Borca-Carrillo, a member of Fordham’s comedy club, Stove’s Cabin Crew, said she feels at ease when she can make people laugh. Though this was her first year participating in “The Vagina* Monologues,” she wrote two original monologues: “The Big V,” which was humorous, and “Anise,” a piece about her journey to self-acceptance.

She explained that Putnam and Martinez-Godas’s directorship was instrumental in realizing a truly unique production of “The Vagina* Monologues.” “They really wanted to make sure that all voices were heard, which was really important, and so they worked with everyone who wanted to write a monologue,” Borca-Carrillo said.

When asked about the greater importance of “The Vagina* Monologues,” she explained that the play “is a protest piece that shouldn’t have to be a protest piece anymore, but that continues to be because we’re in a place that won’t support it fully.” She continued to say that, “Fordham, in sort of staying quiet about it has actually said more about what it actually feels about the materials talked about in the show, which people resonate with, which people feel connected to.”

“I think that the giant community that “The Vagina* Monologues” creates every single year is a testament to the fact that there are underrepresented voices here at Fordham that continue to be underrepresented,” Borca-Carrillo added.

Posters were tacked up against a black backdrop directly behind the performers, bearing messages about sexual violence and assault, statements about gender identity and denouncements regarding Fordham’s treatment of these issues. One poster read, “Fordham does not recognize or respect its students’ gender identities or preferred names, or offer trans-friendly housing.” Another, less-specific but no less stark than the other read, “BELIEVE SURVIVORS.”

The production closed with all of the performers standing before the audience — feet firmly planted on the ground, faces set. Together, they pledged their solidarity with victims of sexual and relationship violence. Together, they established themselves as individuals determined to be heard.