Vote of No Confidence by Faculty Senate Hits One Year Mark 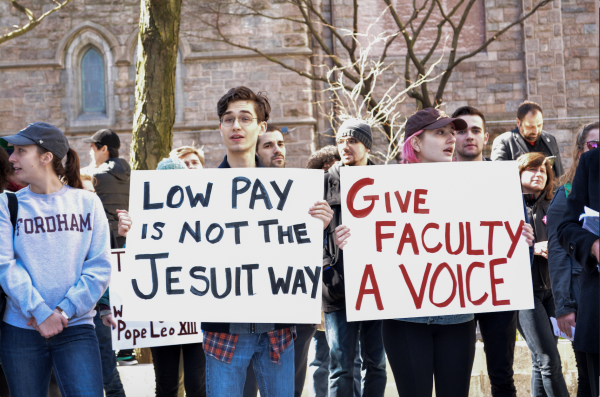 By RUBY GARA and CARMEN BORCA-CARRILLO

April 19 marked the one-year anniversary of the Fordham faculty vote of no confidence against the leadership of University President Rev. Joseph M. McShane S.J. In the year since the vote, negotiations have yielded little change for faculty while the administration promises a better funded future.

Last year’s vote came as a result of a series of conflicts between the Faculty Senate and Board of Trustees on the grounds that administration had violated university statues in changing faculty healthcare and benefits without Faculty Senate approval. Of the 611 faculty members eligible to participate in the vote, 411 of the 488 participating faculty voted against McShane’s leadership.

Negotiations between faculty and administration eventually yielded a three-year contract providing assets to faculty and staff, including a $250,000 hardship fund meant to offset increased costs associated with the new healthcare plan. Though the fund’s initial approval date was April 1, further negotiations between Faculty Senate and administration have delayed the fund’s establishment, ideally reaching a resolution in the upcoming weeks.

The Observer reached out to Dr. Andrew H. Clark, Vice President of the Faculty Senate, Chair of the Faculty Salary & Benefits Committee and a leader of the faculty in the no-confidence vote, as well as Bob Howe, Assistant Vice President for Communications and Special Adviser to the President, to discuss the state of faculty salary and benefits a year after the vote of no confidence.

“A year after the vote, there is not too much that has changed,” said Clark. “Without ongoing negotiation, there is perhaps a little less visible activity, but each of us faces the crisis of our dwindling academic budgets, understaffing, increased labor, weak salary raise and general malaise on a daily basis.”

Clark expressed concern over reconciling Fordham’s strategic budget framework, specifically that of Continuous University Strategic Planning (CUSP), with the President’s “50 by 20” goal, which aims to place Fordham in the top 50 schools ranked by the US News and World Report by 2020.

Howe commented on the President’s “50 by 20” plan as representative of the administration at Fordham. “The University is concentrating on areas that will improve the student experience while raising our rankings,” stated Howe, “those areas include improving retention and graduation rates, class size, and investing in enhanced academic programs.”

Clark fears some “50 by 20” strategies may hinder rebalancing the budget to improve faculty salaries and benefits. “The conflict between the two will continue to put financial stresses on the institution which will ultimately also impact academic budgets, faculty salaries, benefits and maybe even teaching leads.”

For example, Fordham’s generous financial aid benefits 76% of its students and incentivizes high-scoring prospective students to attend; however, without a generous endowment ― which several other private institutions such as Columbia and NYU receive ― Fordham relies on tuition and fees for nearly 84% of its budget.

As a result, Fordham has launched its $175 million “Faith & Hope” financial aid campaign, which has funded 139 new scholarships thus far and raised $131 million towards its goal. The administration hopes such fundraising campaigns will enable Fordham to continue its scholarship funding while lessening stress on the budget.

Salary raises have also presented the faculty with a less optimistic situation than they had hoped for. While Howe reports that the salary pool for faculty and staff stands at a 2.7 increase for fiscal years 2018, 2019 and 2020, Clark said the raise struggles to cover both the cost-of-living and merit-based raises standard for each year. The Faculty Senate eventually decided to allocate .4 percent of the raise to merit (diminished from its usual .6 percent), leaving a .2 percent for cost-of-living. Clark said that this will result in most of the faculty receiving “virtually no salary increase in real terms next year even though they face rising costs in everything they must pay for.”

Going forward, both faculty and administration expressed desire for increased investment in Fordham’s academic future. Future financial plans, Howe reported, promise a 33.1% raise in academic budgets since 2011, as well as investments in new programs such as Cyber Security, Data Analytics, a master’s degree in Real Estate and a new partnership between the Graduate School of Education and the United States Military Academy.

Clark stressed the importance of continued pursuit of faculty benefits in creating a brighter future for Fordham, saying that “without better salaries and benefits in the future, Fordham will not be able to recruit and retain its best faculty, research will be less productive, and teaching and advising will suffer.”

One year after the vote of no confidence, faculty remain disillusioned by the effects of their protest. Faculty benefits, Clark concluded, will remain in limbo until “there is a strong belief among all the University that academic excellence (and thus a supported, excellent faculty) is the most vital ingredient in Fordham’s future success.”