At Fordham, Sustaining a Green Climate 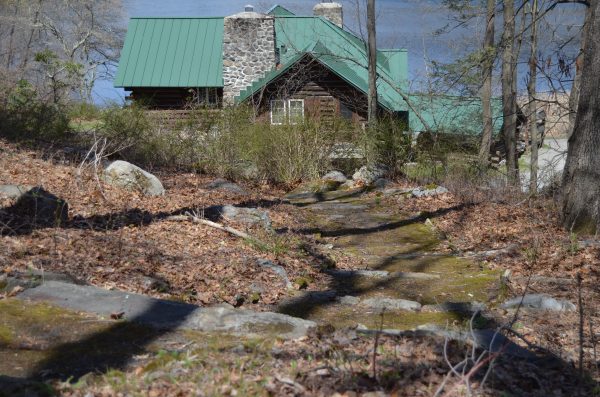 On the small plot of grass that occupies the space on the plaza level between McMahon Hall and the fence along 60th Street, there are four plant beds. Located just around the corner from the McMahon plaza entrance, they’re easy to miss; one has to walk back towards the fence to see them. The beds were built by the Fordham College at Lincoln Center (FCLC) Environmental Club, and their construction exemplifies the numerous, if not immediately visible, efforts made by the university to improve sustainability on campus.

Indeed, FCLC is more environmentally friendly than one might initially think. The Robert Moses Plaza is technically a green roof, as it covers spaces including Pope Auditorium and the former Quinn Library. Additionally, the Law School and McKeon Hall are certified U.S. Green Building Council Leadership in Energy and Environmental Design “environmentally responsible” buildings, and the renovated 140 West building has been retrofitted with a green roofing design and an energy-efficient glass curtain wall along the 62nd Street facade.

Maddie Griffith, FCLC ’19, is the treasurer of the FCLC Environmental Club, and she helped get funding from the university for the McMahon garden alongside numerous other green projects on campus. She explained that even a relatively small project like the garden requires going through a complicated approval process. Representatives from the club meet with the facilities department and propose their project. “It’s a matter of sitting down with them and explaining what we’re looking for, the impacts and benefits of [the project],” Griffith said. The process involves a lot of “nitty-gritty work behind the scenes.”

Last semester, many of the Environmental Club’s efforts were focused on reducing on-campus food waste. The club met frequently with Aramark, Fordham’s food service provider, to discuss expanding its recycling and composting programs. Generally, Aramark does “a lot of composting,” Griffith said, “but as far as the freshman dining hall [is concerned], there’s a lot of food waste.” While FCLC is a relatively small campus, she explained that “we still want to have as good of an impact on the environment as we can.”

This past March, after talks with facilities, the club installed a compost bin in the second floor McMahon trash room, and Griffith hopes to soon install bins on other floors, too. Last semester, the Environmental Club circulated a petition to gauge support for an increased composting program, and students responded quite positively.

Generally, Aramark has been “totally willing to listen” to and work productively with the club. “I think at times they’re taken aback,” Griffith said, “[because] they didn’t realize how strongly … the student body as a whole feels about sustainability.”

Even if food waste in the dining locations could be reduced, Griffith explained that a lot of work goes into sorting the remaining trash and recycling. “We have so many bins that separate the plastics and paper from the trash waste,” she said, but added that it ultimately falls on students to put their waste into the proper receptacles. Students have to make a “cognitive choice” in deciding to recycle, and Griffith stressed that the Environmental Club, Aramark and facilities could all be doing a better job in “publicizing the importance” of making environmentally-conscious decisions.

Griffith spoke highly of Fordham’s efforts to maintain and conserve its limited green spaces. By far the largest such space that the university owns is the Louis Calder Center (LCC), a 113-acre Biological Field Station located in Armonk, NY. Fordham acquired the property in 1967, but the existence of the LCC is not overtly publicized.

Professor Thomas Daniels, the director of the LCC, explained that “there’s a lot of people who are interested in ecology and conservation issues [at Fordham], but you’d be surprised how few of them know about the Calder Center.”

The LCC supports both graduate and undergraduate research. “[We] really want undergrads up here,” Daniels said. Often, students’ work involves them “going out” and “getting their hands dirty” while studying the center’s carefully maintained environment, which includes deciduous woodlands, a 10-acre lake and surrounding wetlands. “Lots of interesting ecological questions … can be addressed up here,” Daniels said. “It’s just a question of finding the thing that you’re interested in.”

A problem that Daniels and other faculty members are currently addressing is the prevalence of invasive species, such as vines that have been growing on and damaging the area’s trees. “The woods now are not the woods we had 30 years ago,” he noted, with regard to the effects that invasive species have had on the LCC. He and other faculty members consider ways in which they could delay the “assault” of invasives, taking into account the cost, feasibility and long-term effects of any potential decision. “It took a long time for the woods to get this way,” Daniels said. “It’s going to take a long time for the woods to not be as bad.”

Despite the harm caused by invasives, the LCC’s tree nursery program continues to thrive. The center has dedicated approximately one acre of land to the growth of trees that, once grown, can be dug up and transplanted to the other Fordham campuses. “We now have more trees here than they can use on campus,” Daniels explained, “so we’re going to use that space for other things.” He stressed that “the trees will stay,” but the space will be used in tandem with other research projects. Growing the trees on university-owned land is cheaper than buying them elsewhere, and “by default,” Daniels said, “[when] you plant a tree, you’re helping reduce carbon emissions.”

Daniels noted that conservation, ecology and sustainability are fields that “a lot of people are interested in” at Fordham. “I think it’s a testament to the university that they’ve maintained this center for 50 years.”

Still, individual efforts to improve sustainability are just as important as those of institutions like the LCC. Griffith stressed the importance of always being environmentally conscious, which, on campus, can be as simple as “making sure that you put your waste in the right places.”