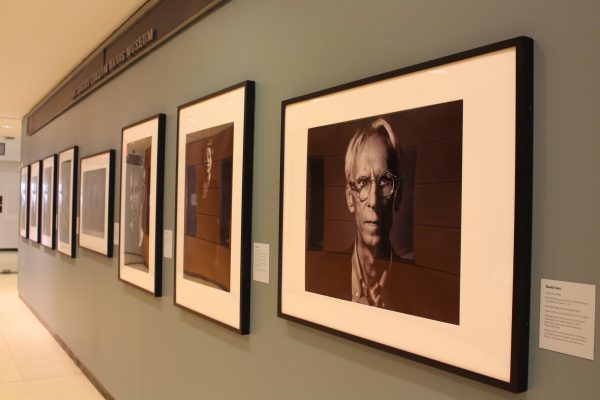 "Portraits of American Playwrights" is currently at the New York Public Library for the Performing Arts. (CELIA PATTERSON/THE OBSERVER)

Tucked away in plain sight, right in Lincoln Center on the other side of the Metropolitan Opera, is a little gem known as the New York Public Library for the Performing Arts. Aside from being a great place to study if you need a break from the ever-crowded Quinn Library, it’s a great place to visit for its free special exhibitions which change every few months. Now until May 5, the library’s museum space houses a small but rich exhibit entitled “Portraits of American Playwrights” by the award-winning, London-based photographer Bronwen Sharp.

This exhibit is not Sharp’s first experience in photographing playwrights; she has photographed scriptists and theatre in London for 10 years. Now, she has come to the United States to document American theatre and the people who create it. Keeping with this implied theme of the roots of these playwrights and their work, her photographs were taken in the playwrights’ own spaces — their writing rooms and their rehearsal studios.

The exhibit features more than a dozen contemporary American playwrights of various genders and races. Although one may not be familiar with them all by name, theatre lovers may know their work, as many of these playwrights’ works have headlined Broadway in recent years. Lisa Kron, who wrote the lyrics and book for the musical “Fun Home,” in addition to featured playwrights Lucas Hnath and Colman Domingo, who wrote Broadway’s “A Doll’s House, Part 2” and Off-Broadway’s “Summer: The Donna Summer Musical,” respectively, are featured in the exhibit. For those curious to know more about the works of the playwrights exhibited, especially those not currently on Broadway, a list of featured works from each playwright is displayed next to his or her portrait. It also lists a directory of materials by that playwright available in the New York Library for the Performing Arts, which include scripts, full tapings of performances, critics’ reviews and more.

In addition to the portraits, the exhibit also features memorabilia from performances of these playwrights’ works on display. Perhaps the most intriguing — even to the non-theatregoer — is a photo of a young Eddie Redmayne from when he performed in the play “Red” by featured playwright John Logan. Pages from some of the playwrights’ scripts are also on display along with other memorabilia.

So why go? The better question is — since the exhibit is just a two-minute walk from campus  — why not go? A student interested in photography can marvel at the interplay between light and shadow in Sharp’s black and white photographs. A student interested in theatre can get a glimpse into the work of a playwright that interests them or discover a new playwright’s work to explore. A student interested in cultural studies can begin to learn about artists from various backgrounds and the conversations their work has begun. And for everyone else? Maybe you could go as a way to procrastinate on your final paper for a little while. Maybe you could go and discover a newfound interest in a writer’s work previously unknown to you. Or maybe, you could simply take a moment to look into the playwright’s pensive faces, which carry an undeniable sense that they are looking right into the future of the arts. You could be inspired to create something groundbreaking.

The New York Public Library for the Performing Arts is open from 10:30 a.m. to 6 p.m. on Tuesday, Wednesday, Friday and Saturday, and from 10:30 a.m. to 8 p.m. on Monday and Thursday. The exhibit can be viewed at any time during library hours.