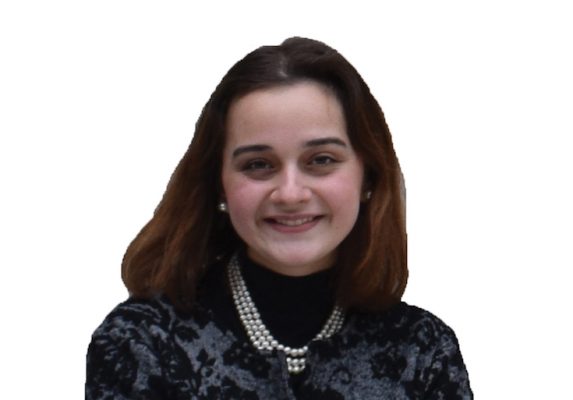 “I thought of some good puns—too many actually,” newly-elected United Student Government (USG) Vice President Katina Smith said of her viral advertisement campaign, the vestiges of which can still be seen on bulletin boards and plastered across students’ laptops.  Iconic flyers picture her proudly astride Lincoln Center’s ram statue, and the appearance of her signature “KitKatina” slogan on notebooks and bags demonstrates continued support for the Vice President around campus. For Smith, the road to the vice presidency was paved with punny one-liners and an infectious school spirit she aims to spread across Lincoln Center in her plans for the 2018-2019 school year.

Smith considers her enthusiasm for Fordham, approachability, and love for witty comedy major aspects of her identity as Vice President. The office’s responsibilities entail a large amount of event planning, most notably Winter Ball, which Smith interprets as highly compatible with her fun-loving character. “If there’s this stuffy person, wearing a suit—I don’t think it’s the right image for the position,” said Smith, “plus, I’m not very good at being stuffy.”

With two years of mock trial and one year as a Resident Assistant under her belt, Smith feels well-equipped to enter the Vice Presidency as an approachable figure well-known around campus. She believes participating in different clubs has given her the platform to function as a link between students and administration on campus.

“In order to make the changes you want to see at Fordham, you need to work with the people who are in power,” Smith said. She acknowledged that Fordham students are driven to enact changes and drive forth social justice, but that administrative roadblocks can at times stifle these ambitions; as Vice President, she aims to create a social atmosphere that will encourage students to “approach [her] with problems or questions…so I can facilitate that [student concerns] on campus.”

At the core of Smith’s agenda is uniting Lincoln Center’s student body through a resource she believes is currently lacking on campus: school spirit.

“In order to have a better representation of student government on campus, you need to have spirit,” Smith said of her own stress on enthusiasm. “It’s something that people can unite around and it’s something people can enjoy and create a positive association to the university.”

The Vice President’s main focus next year is generating and maintaining school spirit on Lincoln Center’s campus via a framework of four incentives: creative advertising, incentivized collaboration, media coverage, and increased accessibility. With these individual plans, Smith hopes to transmit her own excitement for the university to the student body and create a more unified community on Lincoln Center’s campus.

As one of her creative advertisements of school spirit, Smith will enact “Fordham Fridays,” days on which students will be encouraged to wear Fordham gear or maroon clothing. By providing a platform for people to wear their Fordham apparel, Smith aims to create visually and sentimentally united Fordham on campus.

In order to cultivate more student involvement on campus, Smith will incentivize clubs and students with rewards for intra-club collaboration. As an example, Smith posited offering extra funding for events organized by more than one club, simultaneously increasing event attendance and quality by involving a greater number of attendees.

Smith herself intends to reach out to organizations across campus increase the media coverage of Fordham pride: specifically, she aims to work with media outlets across campus to publish a “School Spirit Spotlight” bringing attention to students participating in Fordham Fridays and other university events. Smith hopes highlighting enthusiastic students will cause others to “look up to that person” and subsequently “create a community where people care more about Fordham spirit.”

As another way to increase school spirit, Smith believes university events must be openly accessible by the university’s population. At her vice presidential debate, Smith explained that although planning Winter Ball is one of the Vice President’s most important tasks, she herself had never attended it due to the high price of the ticket. As part of her campaign, Smith pledged to broaden the audience of such events, saying she “would rather have a cheaper event, maybe not at such a high-end place, but that more people can go to.”

Smith’s four incentives work to create an infrastructure on which greater school spirit can be generated and sustained. “Wearing a Fordham shirt alone won’t foster a more spirited community,” Smith said, but she believes her various incentives (including the Spotlight, various prizes, and free food) will create a current for continued unity until school cheer picks up.

“If everyone is doing it, then more people will continue to do it,” Smith said with a shrug before quickly adding, “Okay, peer pressure isn’t always a good thing, but it can be a good thing when you’re trying to foster a community, because you need people to be a part of it.”

Ultimately, Smith hopes her persuasive plan for school spirit will strengthen the bonds between the diverse students at Lincoln Center. “We do have a community in that we’re all very driven, we all do things outside of school, in the city. I think that through creating an atmosphere where there is more school spirit, it’ll give us more of a…community vibe within the mecca of New York City.”

Smith looks forwards to implementing her policies next year, alongside USG President Demetrios Stratis (Fordham College Lincoln Center ’19), with an enthusiastic flair. Students can expect a continuous stream of puns and spirit from their new Vice President, a self-proclaimed “comedic genius.”