An Evening with Larry Pressler 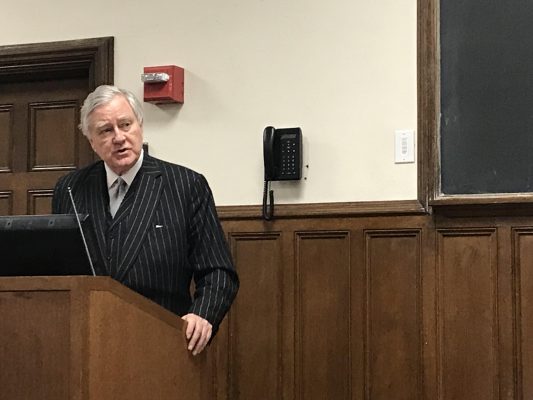 The April 4 event, “An Evening with Larry Pressler,” began a few minutes later than expected. As the last of the attendees filtered into the Keating Auditorium and took their seats, Former Senator Pressler himself was among them, sitting with attendees and student press and asking questions of his own. “What is your major?” Pressler asked a student who had come over to introduce himself. “What are your goals for the future?”

It was an entirely different atmosphere than a few of the other events the College Libertarians had hosted or helped to organize in the past year. The speaker before Pressler, Reverend Al Sharpton, had faced a lively and at times heated audience. However, the warm applause and ensuing silence that greeted Pressler as he took the stage indicated that the night would take a different turn.

Jacob Linker, Fordham College at Rose Hill (FCRH) ’18, and President of the Fordham Libertarians, was the one to introduce Pressler. His opening statement focused on the former senator’s career, highlighting his voluntary enlistment during the Vietnam War, his refusal to take a bribe during the 1978 Abscam investigation and his decision to vote for Barack Obama in 2008 and Hillary Clinton in 2016, despite being a registered Republican. In his closing remarks, Linker made it clear that he felt Pressler was a political figure that should be able to appeal to everyone, regardless of one’s personal beliefs.

“He wants to purely serve the people of his state, not party interests,” Linker said, later adding, “He’s a person who puts principle before party, and puts service before himself.”

Pressler wasted no time once he took the mic, making his thoughts clear on what he called a “fragile” and “faltering” democracy, a state that he blamed on the populace “who do not follow closely what is going on.” For Pressler, the solution is to “go back to basics in American history,” become involved and encourage others to run for all forms of political office.

“The problem we have is a lot of young people, I think, and all of us, is that we don’t admire people who run for office, and we’re not getting the right people to run for various offices,” Pressler said. “We have to get good people to run, and we have to support them.”

While Pressler believes that the political philosophy of young students will likely change over the years, he also feels that it is important to become involved with the party that is most closely aligned with their values.

“You should join the party you least dislike, and try to make it better,” Pressler said. “The way to become elected is to run as a Republican or Democrat, politically speaking.”

Pressler’s speech also shifted to journalists and their treatment of President Donald Trump, saying that the negativity of the press has caused gridlock within the nation’s capital.

“We need good journalism, but currently in Washington, a lot of the stuff I think that comes out, from one side or another, is completely anti-Trump for the sake of being anti-Trump,” Pressler said. “I think you have to give the guy credit for being president of the United States and let him do his job.”

Throughout his speech, Pressler’s statements always returned to the importance of public service and the involvement of the public in politics, regardless of their circumstances.