Free Trade and Equitable Trade Are Not Mutually Exclusive 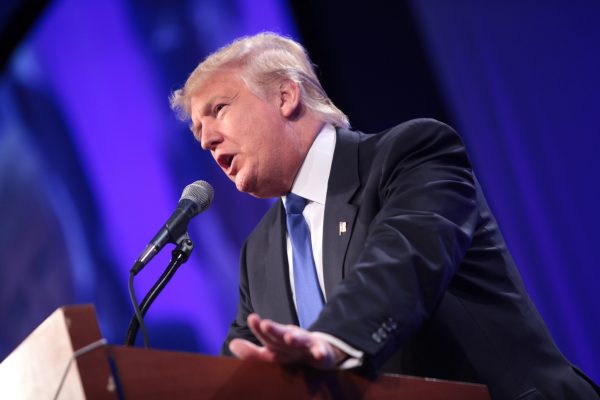 Though Trump's trade platform is based in "winning," Americans win with a more careful approach. (Gage Skidmore VIA FLICKR)

What do Americans stand to gain or lose from protectionist policies? More than you probably think. President Donald Trump’s decision to impose a 25 percent tariff on imported steel and a 10 percent tariff on imported aluminum have been highly controversial. His critics on the trade issue—which include a considerable number of more moderate-leaning and establishment Republicans as well as Democrats—have accused him of inciting economic belligerence that could lead to a trade war. On the opposite side of this increasingly heated issue, Trump’s supporters argue that such stringent restrictions on trade are necessary. While Trump’s tough talk on trade may sound superficially appealing to some blue-collar workers that voted for him, rigid and aggressive protectionism could cause lasting damage to the U.S. economy.

On the issue of trade, Trump’s supporters are joined by unusual company: some progressive Democrats, such as Sen. Bernie Sanders (I-VT) and Sherrod Brown (D-OH), who very rarely even come close to a state of affirmation with Trump administration policies. Progressives’ reasons for supporting what essentially equates to protectionism, however, are almost radically different than the anti-free trade motivations that appeal to right-wing economic nationalists such as Trump. Concerns over how neoliberal free trade could negatively impact the rights of workers dominate why progressive liberals may express great skepticism over the issue of trade agreements. Politicians like Trump and Sanders have both made claims that U.S. trade policies are unfair to American workers. During the 2016 presidential campaign, both Trump and Sanders originally supported U.S. withdrawal from the Trans-Pacific Partnership (TPP), which is considered to be President Barack Obama’s signature piece of his trade policy. After Sanders lost the heated Democratic primary to Hillary Clinton, she added support for TPP withdrawal to her platform. Clearly, debate over trade policy is starting to impact how voters across the political spectrum perceive of the issue. Given the current state of economic supply and demand, the practicality of Trump’s tariffs looks quite dim. An analysis by The Atlantic notes that more manufacturing employees work in industries that buy steel rather than sell it. As a result, such manufacturers could have significantly greater input costs, which could claim jobs.

Another concerning development Trump has stated regarding trade is his ill-conceived proposal of a U.S.-Mexico trade policy. Trump believes that Mexico should be hit with extensive tariffs in order to fund the construction of a wall on the U.S.-Mexico border. In reality though, this would be catastrophic, especially considering the economic benefits surrounding GDP growth that the United States, Canada and Mexico have been able to reap from the North American Free Trade Agreement (NAFTA) since the agreement’s inception in 1994. Simply slapping tariffs on Mexican products for no good reason would lead to drastically higher prices on Mexican goods for U.S. consumers. What do Americans looking to purchase imported electrical machinery for their business, enjoy a bottle of tequila or pick up some avocados from the grocery store all have in common? They all could end up footing the bill for the wall.

Trump’s trade policy is built on a misguided interpretation of American exceptionalism: that if this country is exceptional on the world stage, other countries must not be. According to Trump, not only do we need to “win” at trade, but other countries need to “lose” to project a psychological image of toughness and strength. This mentality could not be further from the truth. In reality, free trade is not a zero-sum game. When the United States works with other countries to develop fair and free trade policies that boost our own economy while respecting concerns of other nations, all parties involved in such agreement stand to benefit. In the global economy of the 21st century, it is evident that globalization must be embraced rather than shunned. The only way to participate in such embracement through commerce is the creation of sensible trade policy. The future of American trade hangs in the balance. Americans have everything to lose—and even more to gain.