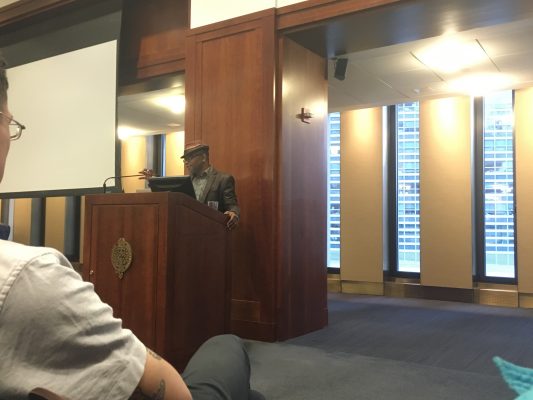 The April 11 Poets Out Loud (POL) reading, held in the Lowenstein 12th floor lounge, was unique in two ways; it not only featured the work of Pulitzer Prize-winning poet Tyehimba Jess, but also that of students from POL’s high school outreach program.

Jess read selections from his book “Olio,” which won the 2017 Pulitzer Prize in poetry. Aided by a multimedia presentation, he exhibited his extraordinary ability to push the limits of form, space and meter in his work. He read a series of five “syncopated sonnets” about the McCoy sisters, twins who were conjoined at the hips, which can be read horizontally, vertically, forwards and backwards. By connecting matching lines in each of the poems, all five can be arranged in a rough “X” shape, which mirrors that of the sisters’ bodies (Jess showed this process via PowerPoint slides).

Students involved with the outreach program typically read their work at the final event of the year. POL works with high schools across the city, often those in underserved communities, to help students foster “an interest in reading, writing and listening to poetry,” according to their website’s mission statement.

Heather Dubrow, English professor at Fordham University and director of the POL reading series, has been leading the outreach program for nine years. She expressed at the reading her great “respect and gratitude” for the students and teachers involved and said that the teachers are “extraordinary men and women who volunteer so much time and energy to the outreach.” She stressed that they take the time to bring their students to the readings “in addition to their many other responsibilities.”

The schools present at the April 11 reading included Bronx Early College Academy, the School For Excellence and the East Side Community High School. Attendance by school varies at each reading, but, as students were sharing their own work, this reading had an especially strong turnout.

Amy Feinstein, an English teacher at the School For Excellence, has been working with POL for the past four years. She said she met Dubrow while she was a student at the University of Wisconsin, where Dubrow used to teach. Later, after Feinsten had started teaching high school here in New York, she said, “I actually happened to bump into her [Dubrow] in a museum … and she told me about this program, and she was hoping we could get my students involved.”

Feinstein said that each summer, Dubrow meets with the high school teachers to plan for the upcoming year. Then, she passes along information about the program and potential poets to her own students. “There’s a lot of logistical [issues],” Feinstein said, both for teachers and students. The biggest challenge for her is “finding students who are interested, but also able to travel far from home in the evening” for the readings. Often, the students don’t leave Fordham until after 8 p.m., and “that can be hard, especially for younger students who don’t live in good neighborhoods.”

Despite the challenges surrounding transportation, Feinstein noted that “students are interested, and really enjoy meeting the poets.” For them, they get a “a taste of college: going to a college campus, being taught by college instructors and then going to a public poetry reading.”

Aaron Pinnix, a Fordham Ph.D. candidate whose work focuses on contemporary and post-colonial poetry, leads many of the outreach workshops that precede each reading. In the workshops, Pinnix works with a small group of students (usually around 20, but attendance varies by week); they explore literary concepts and writing strategies, often by studying the poets of that day’s reading. He echoed many of Feinstein’s sentiments regarding student interest and engagement.

“I have been very impressed with how much the high school students know, [and] how much they come into the sessions with,” he said. Pinnix finds that the students are always “very engaged,” and he is “consistently impressed” with the work they produce.

Each workshop runs differently, but Pinnix emphasized that, above all else, “it’s a conversation.” He wants to know what “they [the students] find interesting,” and said that “what they find interesting are not necessarily the same things that I find interesting.” Each workshop usually begins with pizza, and afterwords Pinnix hands out selections from the poets who are reading that day. In discussing the poems, Pinnix often tries to focus on formal or thematic concepts that he feels “would be interesting to high school students, [and] that they would find intriguing and accessible.” Then, the students write poetry of their own, incorporating and building off the concepts they discussed. “I think it’s important not to think about poetry as something that happens ‘up here,’ far away,” Pinnix said, “but as something that the high school students are engaging with.”

Towards the end of each workshop, the poets from that day’s reading join to discuss their work and answer students’ questions. The discussions reflect the high level of engagement with the poems that the students have. “You can tell by the kinds of questions that they’re asking the poets, they’re interested in this,” Pinnix said. “It’s a real interest, they’re motivated.”

All of the poets who have worked with the students, said Pinnix, have been “very welcoming to the kinds of questions and engagement. They seem to be very interested in the conversation [too].”

Feinstein noted the importance of the communal aspects of the workshops as well. It’s a unique experience, she said, for students to hear professional poets read their work, and “to talk about it with high school students from across the city” who are equally interested in discussing poetry.

The work that the students put into both studying and writing poetry was certainly evident at the April 11 workshop and reading. They looked at selections from Jess’ “Olio,” including some of his syncopated sonnets. The students discussed the complex ways in which voice is transmitted, repressed and given power in the poems. When Jess joined the group at the end of the workshop, he said he was impressed with the variety and depth of the questions asked by the students.

After the workshop, the students and teachers migrated across the hall to the 12th floor lounge for the reading itself. Before Jess read, the night began with selections from the students’ original work. One student, from Bronx Early College Academy, expressed her appreciation for the support of her friends and family and said that being able to read her work “means a lot.”

Her poetry tackled complex issues with an impressive linguistic dexterity, as did the work of all the students. Employing a clever and effective use of rhyme, she addressed both domestic and foreign poverty: “Finding clean water is no easy task, / And dehydration is an easy way / For a child to leave this world in one day. / Now, what do you have to say? / Nothing.”

After the students read, Jess praised the work he and the audience had just heard. “We’re bringing them up right,” he said. “[I’ve] got some serious competition.”

The extent to which the POL outreach program allows students to explore, study and write poetry easily surpasses that most high schools. Pinnix explained that, as a student, he lacked a similar outlet in which he could explore his creative interests. “I didn’t have this kind of community engagement,” he said, speaking about his high school days. “I wish I had.”